Note: I have made errors in this article. You’ll find them below.

Movie theaters have been dark for almost two months now. It’s hard on cinephiles, but it’s much harder on the people who own, manage, and work in these palaces of the imagination.

Independent distributors and art house cinemas have found a way to bring in some money and keep their clientele. You go to your favorite theater’s website and buy a “ticket” to a movie made available by a small, independent distributor. The cost, which is usually about $12, is split between the distributor and the theater. You can stream the movie at home and help a local theater.

Virtual options at the Rafael

But is this virtual cinema really helping the theaters? I asked owners and managers of several local and not-so-local theaters if this arrangement works for them. I also asked independent theater managers who aren’t streaming movies on their websites, and I asked them why not.

To make things more complicated, not everyone calls it virtual cinema. Someone with a tin ear dubbed it transactional VOD (video on demand). Other names are theater streaming, streaming VOD, and theatrical VOD, which can be shortened to ThVOD. I’ll stick with virtual cinema.

As I write this, I know of nine Bay Area movie theaters offering virtual cinema on their websites. I have no idea how many others are across the country.

How much money does virtual cinema bring in?

Theaters can put more movies on their websites than they can on their screens. 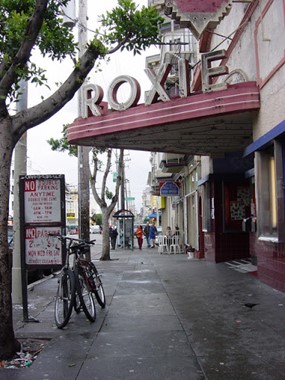 Consider San Francisco’s Roxie, which has twelve virtual cinema offerings as I write this. Manager Rick Norris is still not certain how well it’s going. “There’s no question it is a brand-new revenue stream for us. How significant it is remains to be seen. We are certainly glad we are doing it.”

Only a few blocks south of the Roxie, Alamo Drafthouse runs the New Mission. Along with the regular indie fare, Alamo fosters a cult following. They still offer their Terror Tuesday and Weird Wednesday series, virtually, of course, containing “pre-show content, introductions, and discussions…”

As the name Alamo Drafthouse suggests, the New Mission kitchen offers more than candy and popcorn. The theater’s restaurant, now serving takeout, adds to the theater’s revenue stream. The company chose “to politely decline to discuss the financials.”

Mark O’Meara of the Cinema Arts Theatre in Fairfax, VA has “17 films on our website.  We have sent out notes of all kinds to everyone we know all over the world asking them to support Cinema Arts…We have grosses ranging from $20 to $1,000.  We try to keep the momentum with social media and our newsletter.”

J Moses Ceaser runs Oakland’s New Parkway, and he doesn’t think virtual cinema would fit its homey, neighborhood vibe. He sees streaming movies as “a decent amount of work for a very small revenue stream.  And since the New Parkway’s niche is being a community space and not just a movie theater, we want to keep positioning ourselves in that vein.” Like Alamo Drafthouse, food is an important draw. “We’re fortunate in that we’re also a restaurant, so our revenue has not dried up entirely, so we’re just focusing our limited resources in other directions.”

One theater owner, who did not want to be identified, told me that he was avoiding virtual cinema for fears that when the theaters open, he’d only have access to old movies and independents – exactly what everybody else is already streaming. He also worries that many people can’t afford $12 virtual tickets as the economy sinks.

He has since put virtual cinema offerings on his website.

Dylan Skolnick of the Cinema Arts Centre in Huntington, NY (not to be confused with the one in Virginia), wrote that “Numbers have been fairly poor for our virtual screenings. Our audience just hasn’t been embracing this concept. However, we’re still glad to be doing it. Our rationale…is that it will help with fundraising…people are more likely to donate to an organization that is active. It also gives us something to communicate to our audience other than ‘Give us money so we’re still here when this ends.'”

But it’s not always about the money. Caroline Sorokoff of the Gold Coast Arts Center & Gold Coast International Film Festival discovered that “when we have free online screenings – we have had much more success.  A recent screening (and Q&A we recorded with the Director) of the film In Search of Greatness got a few hundred views in 24 hours. And that film is available on some streaming platforms for free.”

Let’s hope that independent movie theaters, whether showing films virtually or not, will survive the pandemic.