O for a Muse of fire, that would ascend
The brightest heaven of invention…

I can’t read or listen to the prologue of William Shakespeare’s Henry V without thinking that he was wishing he were writing a screenplay. He may have wondered if the stage could hold “The vasty fields of France?” Or if the audiences’ imaginations were up to the task? It almost sounds like he’s apologizing for the limitations of the live stage.

The Battle of Agincourt from Laurence Olivier’s Henry V

…can this cockpit hold
The vasty fields of France? or may we cram
Within this wooden O the very casques
That did affright the air at Agincourt?

With its stirring speeches, marching armies, and big battle scenes, Henry V calls for cinema – and I think Shakespeare knew that too, even if he couldn’t imagine it may one day happen. But how do modern filmmakers deal with that opening. You can’t cut the prologue; it’s one of Shakespeare’s most beloved soliloquies. But it’s kind of ridiculous in a movie to have someone look directly into the camera and apologize for not being able to do what you’re actually doing. 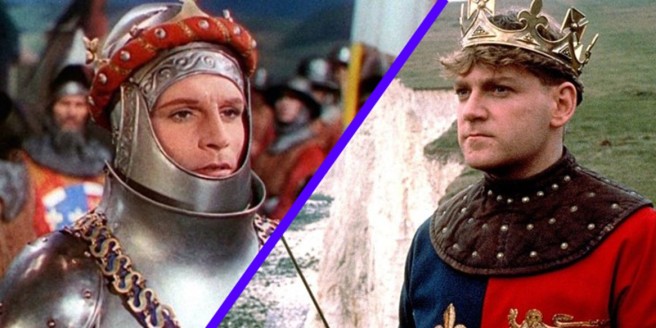 Laurence Olivier and Kenneth Branagh, two major 20th-century Shakespearean actors, filmed two very different films of Henry V. Each starred and directed their version; and for each of them it was their first time as a film director. And each had a different way to deal with the prologue.

I revisited both of these films recently. I saw Olivier’s version on the Criterion Channel. I streamed Branagh’s on Vudu.

Olivier starts his 1944 film with a wide shot of Elizabethan London (an obvious model). The camera moves into the Globe Theatre, where the audience is arriving. The play begins when the Chorus (what we now call the narrator; played by Leslie Banks) is on a stage, talking to a live audience.

The film soon opens up, with the actors playing against painted backdrops. It’s only at the climactic Battle of Agincourt that Olivier goes outside and the film looks realistic. After the battle, it returns to painted backdrops, and closes on the Globe’s stage. When the Chorus speaks throughout the film, he’s separate from the other actors.

Branagh’s version starts as the Chorus (Derek Jacobi) talks to the camera as he walks through a motion picture soundstage. Logically, it doesn’t make sense, but it works. The rest of the movie looks realistic and period appropriate, and when the Chorus appears, he walks through the same space as the other actors. While Olivier gives us a film attached to live theater, Branagh presents a medieval war movie with poetically beautiful dialog. It’s less of a stunt and more of a motion picture.

I’ve always had a moral problem with Henry V. Shakespeare’s play about an English king conquering France is nationalism at its worst. Shakespeare treats Henry as a perfect monarch. Yes, he’s generally kind to his men and gives wonderful speeches. But he’s going to war over an insult, which seems to be an excuse to grab some land.

On the other hand, when Laurence Olivier made this film, England really did have a very good reason to invade France. The Nazis had already conquered it. The British, and the Americans, weren’t conquerors, but liberators.

Branagh made a Henry V when England wasn’t fighting against fascism. Is it just plain nationalism? One could argue that this is an anti-war movie, although that may be difficult. Branagh makes much about the ugliness of violence, and many commoners die for something that’s largely meaningless. 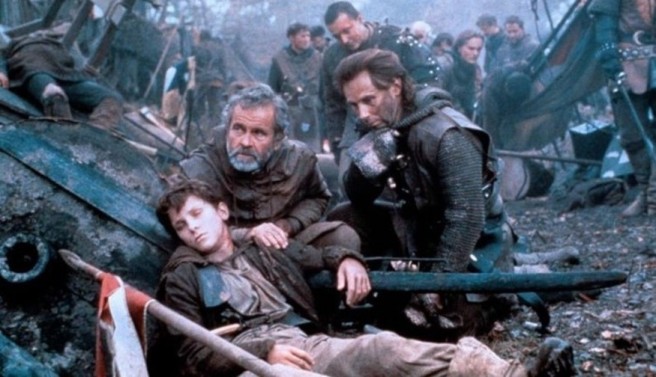 Both films used some of the greatest Shakespearean actors of their time, but both used them differently. Olivier directed his actors to play over the top – especially with the comedic parts. Consider Robert Newton’s role as Ancient Pistol. His last scene, as Shakespeare wrote it, is tragic. Everyone he’s loved is dead, and he has nothing to look forward to but a life of petty crime. But under Olivier’s direction, there’s no humanity; just broad, unfunny shtick. Robert Stephens, in the Branagh version, is perfect. He’s funny when he should be, but tragic when appropriate.

Both films are sweeping adventures with some of Shakespeare’s most beautiful language. I give Olivier’s version an A-. Branagh’s, a full A.

As King Henry flirts with his future wife, note the painted background

Last year I saw another version of the story called The King, without Shakespeare’s language or point of view. In director/co-writer David Michôd’s radical approach, Prince Henry starts out as a near pacifist, very unwilling to go to war. But by the end, as King, he’s a cold-blooded killer. The biggest character change is in Falstaff, who is no longer comic relief. He’s a bit too loving of wine and women, but he’s also a brilliant and courageous tactician, and becomes the King’s best and most important adviser.

The King, without Shakespeare’s poetry

You can catch it on Netflix. Despite the daring concept, I can still only give it a B.