Can true justice prevail in a racist society? According to the people who made Just Mercy, it can, but it takes an angel – or at least a gifted, well-trained, intelligent, and altruistic person to help those who are assumed guilty before the crime is even committed.

Michael B. Jordan of Fruitvale Station, Creed, and Black Panther plays this movie’s human angel. His character, Bryan Stevenson, is a young, idealistic lawyer right out of Harvard. He goes into rural Alabama to help convicts on death row.

Stevenson meets these unfortunates, almost all of them black. While he tries to help several convicts, he begins to zero in on one Walter McMillian, who prefers the nickname Johnny D. (Jamie Foxx). As Stevenson looks over court records, he realizes that Johnny D. was obviously framed. A white convict got off death row by giving not only false but outrageously unbelievable testimony.

If the name Bryan Stevenson seems familiar, it’s probably because it’s in the green box at the top of this review. The screenplay is based on his memoir of the same name. I don’t know how closely the film sticks to actual history – that’s not my job. I’m here to tell you if a film is worth watching. Just Mercy is very much worth watching.

A courtroom drama based on real life has a suspenseful charge that a work of complete fiction lacks. Unless you remember the case from reading it in the papers, you really don’t know how it’s going to end (unless it’s a Quentin Tarantino movie). 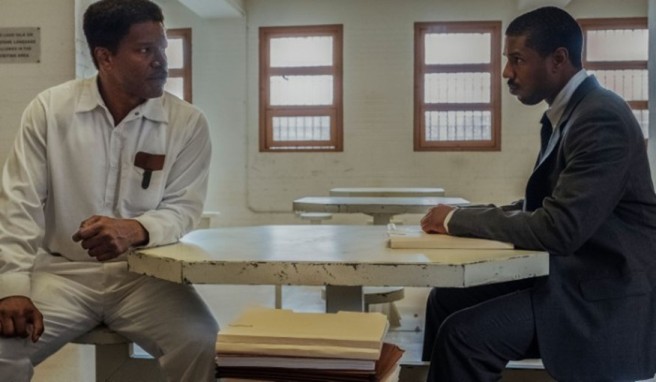 Jordan gets to play the film’s hero lawyer, but Foxx’s convict gets the more interesting character arc. When we first meet him on death row, he’s pessimistic, angry, and knows there is no way out of prison except in a coffin – and he won’t have to wait long for that. But as his lawyer works his way through the system, Johnny D. begins to hope. And sometimes, that hope smashes him down.

While the lawyer doesn’t have so interesting an arc, he still learns a lot over the course of the film. From the start, he wants to make the world a better place, but he must learn how difficult that will be. He’s strip searched before meeting his client (illegal, and something that wouldn’t happen to a white lawyer), two white cops pull him over at night in the middle of nowhere and place a gun on his head, just to scare him. He witnesses an execution. It becomes personal.

Minor characters fill in the story. There’s the white woman who helps Stevenson, a war veteran suffering from PTSD and waiting for his execution, and a white death row guard with a strong sense of empathy. 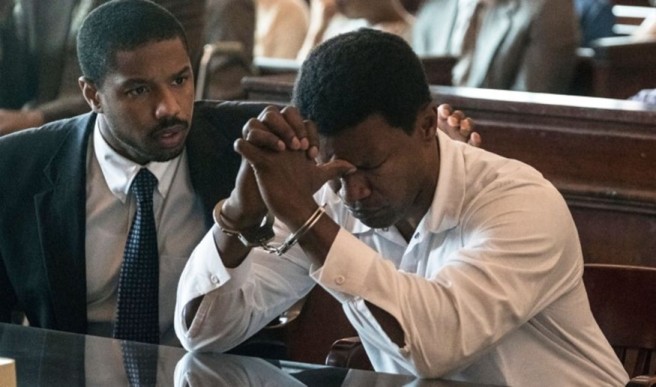 The story is set in Monroeville, Alabama – the childhood home of Truman Capote and Harper Lee, and the town that inspired the fictional setting of To Kill a Mockingbird. Twice white locals suggest that Stevenson visit the Mockingbird Museum.

Like Mockingbird, this is a story of a black man accused and convicted of a crime he didn’t commit. But this time, it’s not from a white perspective.