Thursday was the San Francisco Jewish Film Festival‘s last day at the Albany Twin, and my last day at the festival. I saw three films. Oddly, two of them were fiction; a surprising ratio in this year’s documentary-heavy lineup.

None of the films I saw were followed by a Q&A. That shouldn’t be surprising. Filmmakers in attendance become rare as a film festival comes to a close. 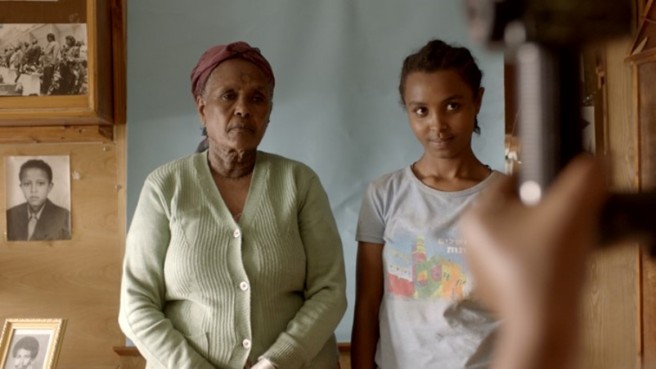 This touching Ethiopian film follows the adventures and moral quandaries of a teenage girl caught between giving up her boyfriend or immigrating to Israel. This is 1989, civil war is tearing up the country, and patrols are forcing young men and teenage boys into the army. Mina (Betalehem Asmamawe – a young actress with amazingly expressive eyes) tries desperately to hide her love or bring him with her family to safety. Beautifully shot by Daniel Miller. Written and directed by Aalam-Warqe Davidian.

I give FigTree an A-.

How is this a Jewish film? The family is Jewish. I’m not sure, but I think the boyfriend is, as well. One of the film’s pleasures is to see a bit of how black, African Jews live.

A documentary about a dying magician turns into a documentary about itself. The Amazing Johnathan, a famous, edgy stage magician, has a heart condition and was given a year to live several years ago…yet he’s still alive. While making the film, director Ben Berman discovers that there is another documentary film crew following his subject. Then another crew, and another. Can you really trust a magician?

The meta aspect of the movie sometimes annoyed me, but sometimes just seemed funny. I give this unusual documentary a B.

Why is this a Jewish movie? There is no mention of Johnathan being Jewish, although in one early scene he’s drawing an illustration of a chasid. Berman, who becomes the film’s co-star, is clearly Jewish in name and in facial features.

You can catch The Amazing Johnathan Documentary at the Rafael, today, at 4:05 (the Rafael has three screens).

Despite the title, don’t expect a lot of laughs. Stand-up comedy doesn’t go over well with subtitles. But even for the Russian audience, this was never meant to be funny. The Humorist is a very serious drama about a very popular comic, set in the 1980s Soviet Union. It’s not easy to poke fun at the government while staying on the good side of the KBG and the Kremlin. Aside from his work, has a drinking problem and family issues.

I give The Humorist a B+.

How is this a Jewish film? The main character is a secular Jew, and anti-Semitism pops up frequently.

Although I won’t be attending anymore SFJFF screenings this year, the festival will go on through Sunday. I’ll write up an overview of the festival next week.

One thought on “Ethiopian Jews, a dying magician, & a Soviet stand-up comic: My Last Day at the San Francisco Jewish Film Festival”