I’m back from a three-week vacation in Europe. Had a great time. But I missed the San Francisco Jewish Film Festival‘s schedule announcement. So, a couple of weeks late, let me tell you what’s coming up.

The Bay Area hosts quite a few of what I call identity film festivals, because they’re about how people identify themselves. We have festivals for Asians, Asian-Americans, the Irish, LGBTQ, German speakers, and, of course, Jews. Since I’m Jewish, I follow this festival more than others.

The 39th San Francisco Jewish Film Festival opens on Thursday, July 18 and closes August 4. But, like everything Jewish, it’s more complicated than that. If you want to know when and where the festival is screening, follow this simple guide:

This year’s festival starts with Fiddler: A Miracle of Miracles, a documentary about the creation of the Broadway play, Fiddler on the Roof. The “official” closing night is at the Castro on July 28, with a screening of The Red Sea Diving Resort, a fiction film based on a true story about smuggling Ethiopians into Israel in the 1980s. But the actual last screening will be How About Adolf?, at Oakland’s Piedmont theater on August 4, at 8:50.

Fiddler: A Miracle of Miracles

As usual, the festival has several spotlights, small collections of films on a particular issue or theme. This year’s spotlights include Ethiopian Jews, HerStory, and Take Action Day. These aren’t exclusive. Fig Tree lands in both the Ethiopian Jews and HerStory spotlights.

The Festival’s Freedom of Expression Award this year goes to Judith Helfand. I’m not familiar with Helfand, an American documentarian who, according to the festival website, “is a brilliant storyteller and astute observer of the complicated relationship between economics, the environment and democracy.”

Shut Up and Play the Piano 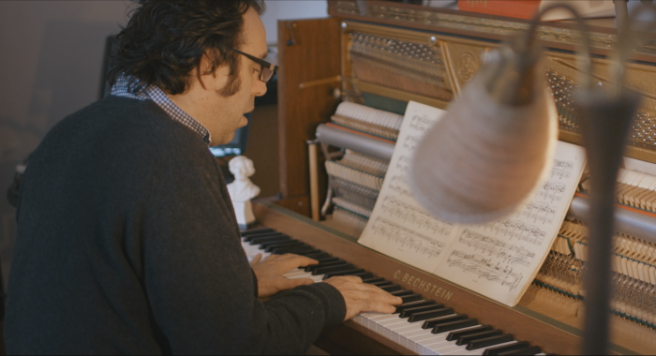 I’m not familiar with Chilly Gonzales (yes, he’s Jewish). This Canadian pianist and composer has performed and recorded everything from jazz to hip-hop to classical. There must be something interesting in that story.

This comedy, the festival’s Centerpiece Narrative film, follows a Palestinian young man who gets work writing for a soap opera. Things get complicated when an Israeli officer becomes his writing partner.

What She Said: the Art of Pauline Kael

I review movies. Of course, I want to see a documentary on the legendary Pauline Kael.

Over the course of a single day, a young man in Wisconsin “must find a way to balance the demands of a dozen hilariously kvetching, adamantly unassimilated, elderly Russian funeral guests (plus an accordion player) with his special-needs clients.” The Festival describes it as a “humane comedy.”

I’m hoping to screen some of the movies before the festival opens, and others I’ll see at the festival itself. You can follow my coverage of this festival.