The setup suggests a thriller. A young man witnesses an armed robbery gone wrong and takes two duffle bags stuffed with large bills. No, this isn’t a thriller. Nor is it the witty satire that the marketing suggests. What is it? Aside from a few good scenes, Denys Arcand’s latest film feels emotionally flat. It’s trying to make a point about how the wealthy screw all of us, but it doesn’t get its message across. He also indulges in some troubling stereotypes. Read my full review.

In the mid-1970s, Bob Dylan toured the country with Roger McGuinn, Ramblin’ Jack Elliott, Ringo Starr, Joni Mitchell, and Dylan’s former partner and lover, Joan Baez. The Rolling Thunder Revue became rock ‘n’ roll legend. Now Martin Scorsese has turned the tour into a combination documentary and concert film. As far as I can see, it’s only screening one night.

I haven’t seen this documentary about one of cinema’s most important auteurs. But I’m hoping to see it. The opening screening of the series Looking Again at Orson Welles. 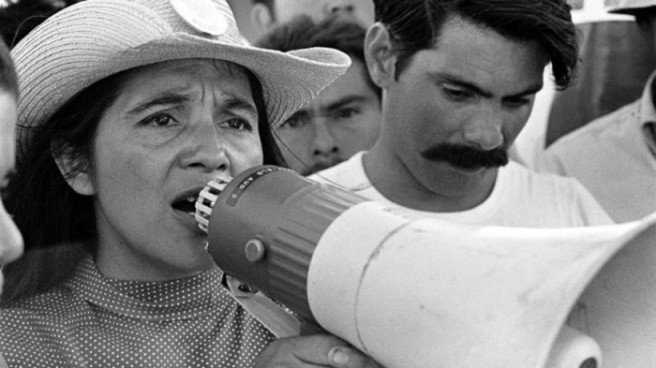 While Cesar Chavez became famous creating the United Farm Workers union, Dolores Huerta did much of the work. She was a part of the union from the start. She gave up her chance to have a normal life, became an absentee mother, ignored her love of music, and became a leader in the labor struggle, the Chicano movement, and inevitably the women’s movement. This music-filled documentary shows Huerta’s vitality, both young and old, and lets you discover an important figure that history seems to have skipped. Read my full review.

How does any movie survive a 70-year reputation as the Greatest Film Ever Made? Besides just being very good. True, there are films more insightful about the human condition, pictures more dazzling in their technique, and movies more fun. But I’d be hard pressed to name any this insightful that is also as dazzling and entertaining. As Orson Welles and his collaborators tell the life story of a newspaper tycoon through the flashback memories of those who knew him, they also turn the techniques of cinema inside out. Read my A+ appreciation. Another part of the series Looking Again at Orson Welles.

Enough bad sequels can make us forget how much we loved the original, and in the case of Shrek, the original is very lovable indeed. This story of an ogre on a reluctant quest to save a princess turns both traditional fairy tales and their Disneyfied adaptations inside out. The evil prince’s castle looks like Disneyland, familiar characters make odd cameos, and that old song “Have You Seen the Muffin Man” turns very gruesome (in a funny way). In the third act, Shrek rips apart one of the worst lessons that children learn from these old stories, providing a happy ending that neither Grimm nor Disney could have imagined. A Kids Camp presentation.

I’ve seen this classic romantic comedy many times, but I just get more respect for the picture. The revolutionary staging and camerawork wasn’t just art for art’s sake; it sets the mood and heightens the characters. Consider the opening credits, with Ben (Dustin Hoffman in his breakthrough role) standing on an airport’s moving walkway while others pass him by. That tells you a lot about this young man. And as I get older, I feel far more empathy for the film’s villainess, Mrs. Robinson (Anne Bankcroft).

A- Winchester ’73, Stanford, Friday through Sunday

James Stewart, in the role that helped him find his dark side, plays a bent on revenge. He wins an exceptionally good rifle in a marksman contest, but it’s soon stolen. The rifle changes hands several times, while Stewart and his sidekick (Millard Mitchell) search for the villain who committed that crime and a far worse one. Shelley Winters is wonderful as a woman far more courageous than her fiancé would ever be. Wonderfully directed by Anthony Mann. On a double bill with another Mann/Steward western, Bend of the River, which I saw long ago and liked.