Saturday was a crazy day of moviegoing. Not only did I watch four Noir City feature films at the Castro, but I also caught four Laurel and Hardy shorts on the other side of the bay.

And the crazy thing is I had previously seen seven of the eight films. With some of them, I can’t remember how often I saw them.

I started at 11:00am at Oakland’s Elmwood Theater with Another Nice Mess: Restored Laurel & Hardy Shorts. Three of the shorts, The Battle of the Century (the only silent in the group), Helpmates, and the Oscar-winning Music Box are masterpieces. The lesser one, Their First Mistake, is still damn funny.

Helpmates just may be the perfect Laurel and Hardy movie. They must clean up a messy house, and neither of them has the mental capacity for the job. Stan, who knows he’s an idiot, makes a mess of almost everything, but he has an occasional, and seemingly magical ability to do things right. But pompous Ollie, who thinks he’s smarter than Stan, has a real talent for making things worse.

The screening was well attended, and the laughs were plenty. I was delighted to see children in the audience. Not introducing Laurel and Hardy to your kids just may be a form of child abuse.

With the show letting out at 12:35, I thought I couldn’t possibly catch the beginning of the first film at Noir City. It didn’t seem that important, since I’d seen the movie before. But good luck with BART and the Muni Metro got me to the Castro just in time.

The matinee double bill was all about racism…and crime, and suspense, and sex, and everything else you expect in a noir.

The Crimson Kimono
Two police detectives, roommates and best friends, must find a killer while they both fall for the same beautiful woman. I should mention that one of them is white, the other is Japanese American. As a murder mystery, Samuel Fuller’s racial message picture is awfully weak. But you can easily enjoy the snappy dialog, even if it’s not very believable.

Fuller didn’t believe in subtlety. He has a message to say in his movies and he’s willing to beat it over your head. Not only does he place one scene in a cemetery for Japanese-American soldiers who died in World War Two, but the camera lingers on two separate plaques honoring their sacrifices.

Minor spoiler alert: This may be the first Hollywood movie where a mixed-race romance provides the happy ending. I give it a B-.

The 35mm print was a bit beat up, but not too badly.

Odds Against Tomorrow
The only movie that I saw Saturday that I hadn’t seen before became a very happy surprise. This suspenseful heist movie, written by blacklisted screenwriters and directed by Robert Wise, puts you on the edge of your chair. 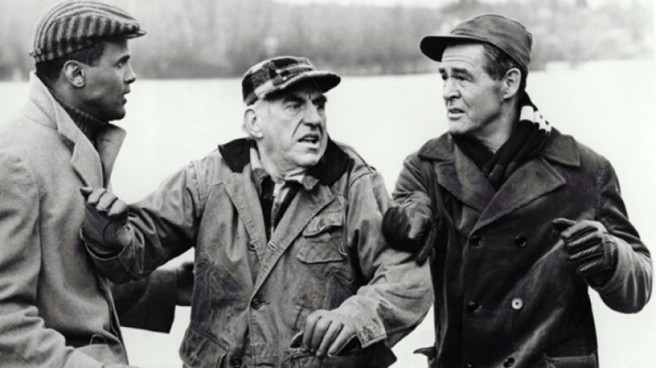 Three desperate men set out to rob a small-town bank. The big problem is that one of them is black (Harry Belafonte, who gets top billing), and another is a horrible racist (Robert Ryan). Ed Begley plays the leader who tries to keep them together.

You can’t help rooting for the Belefonte’s character, a singer (of course) who’s in trouble with the mob because of his gambling debts. He won’t be the only one in danger If he can’t pay up; he has a ex-wife and a daughter.

The climax gets a little silly, and steals from one of the greatest gangster movies of the 1940s (I can’t tell you which without spoiling). And the last line of dialog is absurdly preachy.

I give Odds Against Tomorrow an A-.

The movie was projected digitally; I don’t know from what source but it wasn’t a DCP. Strangely, it was shown in the wrong aspect ratio, resulting in unneeded space at the top and bottom of the screen.

For the beginning of that tumultuous decade called “the ’60s,” Noir City leader Eddie Muller picked two of the most influential films of all time, Breathless and Phycho.

Breathless (À Bout De Souffle)
Of all the major international auteurs, Jean-Luc Godard is probably my least favorite. And yet I really love his first feature. There’s nothing special about the noirish plot: A young criminal (Jean-Paul Belmondo) murders a cop, and now he’s on the run. Except instead of running, he seems more interested is convincing his American girlfriend (Jean Seberg) to sleep with him. There’s no real suspense.

And yet this is a great movie. The wild and energetic camerawork, the crazy editing (I believe it’s the first film to cut within a shot), and the sexual energy of the stars are like nothing anyone had ever seen before. You’re just dazzled with the very cheap but amazing technique.

I still give it an A.

The 35mm print was very good, except for the hard-to-read subtitles. But that’s what subtitles looked like in the 1960s.

Psycho
In Muller’s introduction to this Hitchcock masterpiece, he explained why Psycho symbolically killed film noir. It starts as a conventional piece of the genre – except with the genders switched. A woman can’t be with the man she loves because of money problems, so she steals a large amount and sets out to be with her boyfriend. It’s a noir, Muller said, “until it isn’t.” 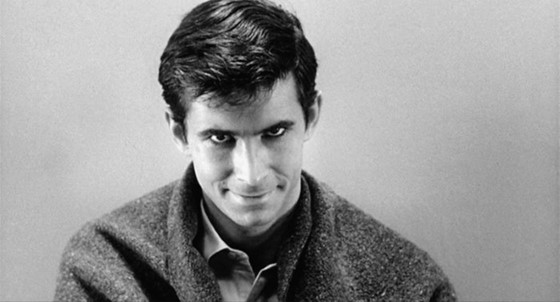 In his last great movie (yes, many will disagree), Alfred Hitchcock pulls the rug out from under us several times, leaving the audience unsure who we’re supposed to be rooting for or what could constitute a happy ending. In roles that defined their careers, Janet Leigh stars as a secretary turned thief, and Anthony Perkins as a momma’s boy with a lot to hide.

I knew too much about Psycho before I ever saw it in 1973. I wish I could erase all memory of this movie and watch it again with fresh eyes. But Saturday night at the Castro, I saw the next best thing. I saw it on the big screen for the first time in at least 35 years, and this time with a packed and enthusiastic Noir City audience. I still give it an A.

The 35mm print was excellent.

2 thoughts on “Saturday at Noir City…plus Laurel and Hardy”