I spent Sunday afternoon at the BAMPFA, where I watched a recognized masterpiece and a lesser-known disappointment.

It had been a long time since I’d seen Fritz Lang’s first talkie on the big screen, and it was as wonderful as I expected. Maybe more. Lang shows us a Germany sinking into corruption, depression, and paranoia. The paranoia is understandable; someone is murdering little girls and successfully eluding the police. Eventually the underworld must do what the authorities cannot and stop the killer. Peter Lorre became famous as the oddly sympathetic child molester, driven by inner demons he cannot control. I’m not sure film noir would ever have happened without this 1931 thriller. 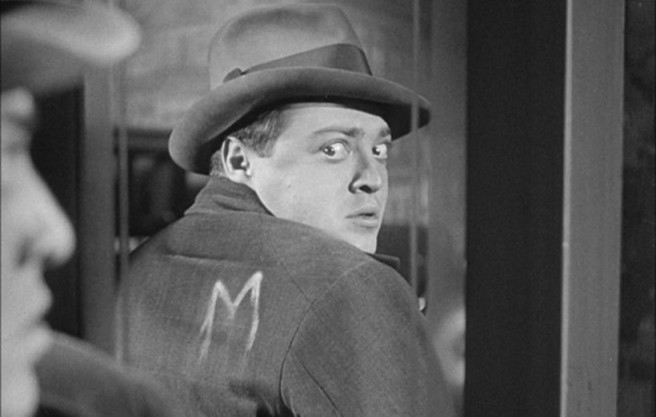 I’ve seen M many times before, but this time I really noticed how much Lang used silence in this early talkie. And I mean real silence, not just the lack of dialog. On much of the film, maybe close to half, there is absolutely nothing on the soundtrack. But was that what Lang intended? In 1931, true silence was impossible while watching a movie. Audiences would have heard clicks, scratches, and other noises. It wasn’t until digital sound that true silence became possible. I’m not sure how I feel about that. Perhaps Lang wanted the noise, but probably not. Either way, it was very effective.

Speaking of digital, M was screened off a DCP, and it looked fantastic. It showed details and gray shades without edge enhancement. But this DCP had a problem. Before the movie proper, we got a long series of text-filled title cards, maybe 6 or 7 (I didn’t count), about the film’s history and restoration. This was all in German, with English subtitles – only a few words at a time – flashing by very fast at the bottom of the screen. Someone in the audience described it as “speed reading.” I don’t see why they couldn’t have used full-screen English title cards; which would not alter the film itself.

The screening was part of the series Fritz Lang & German Expressionism. I still give this film an A.

This 1949 weepie was Ida Lupino’s directorial debut, but she didn’t get credit for it. She produced the film and co-wrote the screenplay, but she hired Elmer Clifton to direct. Clifton suffered a heart attack as the film went into production, and Lupino took over. She gave Clifton credit out of respect and kindness.

She went on to direct some very good movies, but this isn’t one of them. A young woman, really a teenager (Sally Forrest), fools around with a musician, leaves her parents, falls in love with a great guy, and then discovers she’s pregnant (not by the nice guy, because nice guys didn’t do things like that back then – at least not in the movies). Then she gets into a lot of trouble.

It’s a message movie, although the message isn’t entirely clear. It’s probably “Be nice to unwed, expectant mothers,” but it isn’t clear. Perhaps it’s “Don’t fool around” or “Use birth control.” Maybe it was “Don’t sleep with a musician?” (For the record, I’m happily married to one.)

Like so many message movies of the late 1940s, Not Wanted is too melodramatic for its own good. Most of the characters, including the young woman, are abstractions rather than real people. The exception was Keefe Brasselle as the nice guy.

According to the BAMPFA website, the movie was to be projected from a DCP. But it looked like a somewhat scratched, multi-generational 35mm print. I turned my head around and looked at the booth. The light was coming from the 35mm projectors. How did I know? I’ve been in the booth.