I spent more than 13 hours in the Castro Theatre Saturday, watching six programs of silent films. I discovered two great comedies (one short, one feature), revisited a romantic epic, and listened to a lot of great, live music.

I noticed an interesting programming choice involving the music. The Festival hired piano players to accompany the comedies. For American-made dramas, they picked the Mont Alto Motion Picture Orchestra. For European dramas, they went for the Alloy Orchestra.

Curiously, World War I plays a role in both of the American-made dramas.

Here’s what I watched:

The day started with a laugh…actually a lot of them, in the form of three hilarious Laurel and Hardy shorts. This was my first time seeing The Finishing Touch, where the boys set out to build a house and destroy it instead. I’ve seen Liberty and Big Business may times, but they’re both still extremely funny – especially if you see them with an audience.

Jon Mirsalis provided more than musical accompaniment. Mirsalis is deeply involved with restoring the team’s films. As such, he introduced them before the screening. His music was excellent. I especially liked his use of Christmas carols for Big Business.

The festival screened a washed-out 35mm print of The Finishing Touch that looked like it was eight or nine generations away from the original camera negative. The other two films have been restored by Lobster Films, and were projected from a DCP. The image quality varied but was largely pretty good.

This is a message movie, and one that pulls no punches in delivering its message. And yet, it works very well as a drama. The movie tells us how young women are forced into prostitution and how, once that happens, society keeps them down. The movie tells its story forcibly and makes us root for the protagonist (Priscilla Bonner). Despite all the moralizing, The Red Kimona is an entertaining melodrama. Directed by Walter Lang and Dorothy Davenport.

The Mont Alto Motion Picture Orchestra did their usual beautiful accompaniment, bringing out the romantic and tragic aspects of the story.

The DCP from Kino Lorber, taken from an original 35mm restoration by the UCLA Film and Television Archive, looked great. Frequently tinted, it recreated what appeared to be occasional hand-painted coloring.

Laugh out loud from beginning to end, this was the big, happy surprise of the day. The screamingly funny, beautiful, and all-around loveable Beatrice Lillie should have become a major film star; the camera just loves her. In Exit Smiling, she plays a minor crew member in a traveling theater company. Lillie wants to act. No one wants to give her a try. She also wants a handsome man wanted for larceny. That embezzlement subplot gives us Harry Myers of City Lights as the main heavy. The cast also includes Franklin Panghorn at his gayest.

I give this comedy a big A.

Wayne Barker did a wonderful job on piano.

The 35mm print from the British Film Institute was acceptable but not exceptional. Something went wrong in the booth and the screen went blank for a couple of minutes. Barker’s music kept us entertained while the screen was black. 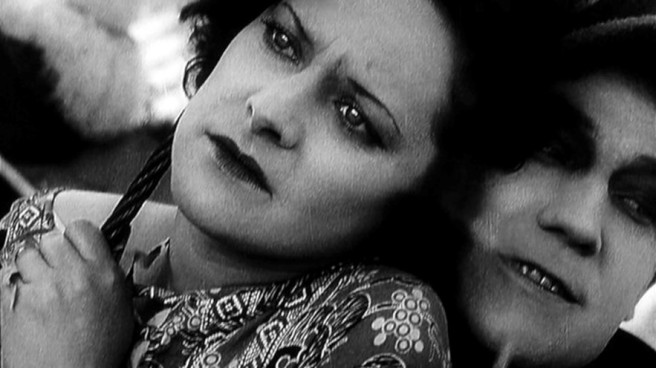 The simplest of melodramas, but made by the great French auteur, Jean Epstein. The movie gives us a horrible, evil villain who forces the helpless ingénue into an unwanted and cruel marriage. But instead of a courageous, handsome hero, her true love appears to be suffering from depression; he’d rather mope than raise a finger to save the woman he loves. The closest thing to a hero is a young, disabled woman, which is kind of cool. Epstein’s striking and powerful use of close-ups create a real tension.

I give Coeur Fidèle a B.

Alloy Orchestra may have made this a better movie than it really was. Their music created suspense and helped the setting, especially in a carnival scene.

I have no complains with the Cinémathèque Française’s DCP. 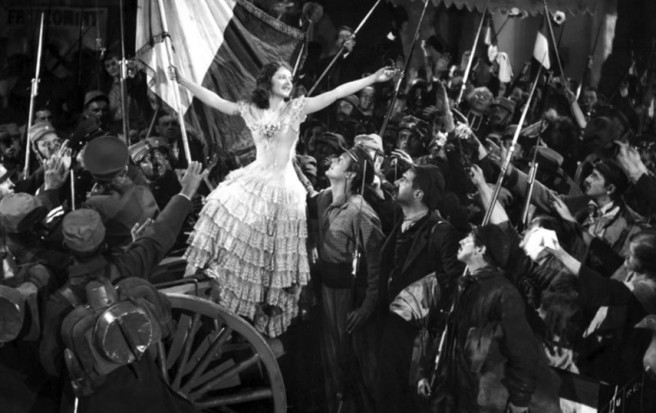 I first saw this Hollywood spectacular about 20 years ago on DVD, but with the full theatrical experience, I realized just what a lovely, romantic, sweeping war movie it is. Set in Paris, working-class couple Janet Gaynor and Charles Farrell fall in love under strange circumstances. Then, just when they’re ready to get married, World War I breaks out and separates them. There’s a thick religious tone to it, but you can ignore it.

7th Heaven is probably the first feature film released with an optical soundtrack (just music and effects). The Mont Alto Motion Picture Orchestra ignored that score, and used their own in another great performance. They also used the Alloy Orchestra’s percussion-heavy rig for war sound effects.

MoMA’s restoration DCP looked fine. I noticed that the image was a bit narrower than most silents. I suspect that’s because of the optical soundtrack.

German expressionism at its most expressionist, and that’s not a good thing. This story of a bank clerk turned embezzler makes Dr. Caligari look like a documentary. The sets, the costumes, and makeup are just weird for no reason. And the story isn’t much, either. It’s hard to follow, and not worth following.

I give this one an F.

I think the Alloy Orchestra may have made things worse with their repetitive score.

The 35mm print from National Film Archive of Japan had the original German intertitles with Japanese subtitles. So an English translation was read out loud. Since the intertitles were rare and short, that wasn’t a problem.