Here’s another crop of movies coming to this year’s Mill Valley Film Festival. This selection, unfortunately, isn’t as good as the last one.

Crime and grime penetrate the city in this very dark noir. Nicole Kidman (in a brilliant performance) plays Officer Bell, the hard-drinking, tough, unreliable police detective at the edge of her capabilities. Tired, weary, and constantly angry, she has seen every bad thing possible, and many of them were her fault. Her eyes sometimes look like the walking dead. Atmosphere and character help support the impenetrable plot…until that plot suddenly becomes clear in the last few minutes. 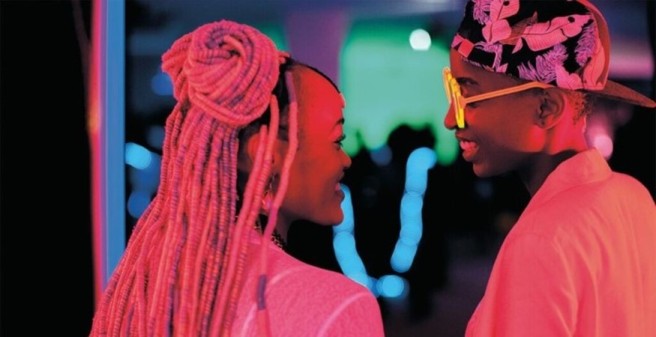 Kena (Samantha Mugatsia) hangs out with the boys in her Kenyan town, but she’s not interested. In fact, she acts more like a boy than a girl. Then she meets the right girl, Ziki (Sheila Munyiva), and it’s love at first sight. But that doesn’t make life any easier; this is Kenya, an extremely Christian and homophobic country. And yet, for two-thirds of the runtime, the movie feels upbeat. The screen splashes with vibrant colors and upbeat music seems to saturate the town. But when the secret love is revealed, the friends and neighbors turn into a mob.

Inner beauty and outer ugliness meet in this semi-comedy about a film crew making a movie…and not a very good one. The movie inside the movie requires performers of the sort that used to be called circus freaks. One of them, played by Adam Pearson, gives a wonderful performance as a funny, pleasant man stuck with a very unusual face (Pearson’s own). Outside of his performance, Chained for Life is little more than a collection of filmmaking clichés, from the German director to the insecure leading lady (Jess Weixler) to the overuse of “Fooled you, that’s just in the movie” gags.

I guess it’s difficult to find new documentary approaches to integration and the civil rights eras. This one covers the first Little League game in the south between white and black teams (it happened, pretty much accidentally, in 1955). Director Jon Strong concentrates on the players on both teams, now in their 70s. the film Is at its best when the white subjects talk about the racism instilled in them and how they’ve changed (and, unintentionally, how they haven’t). But the film fails to make the game an important civil rights moment, and the music often plays too loud over the interviews. Andrew Young has some interesting things to say.