For personal reasons, Saturday was my last day at the San Francisco Jewish Film Festival. I caught two documentaries. 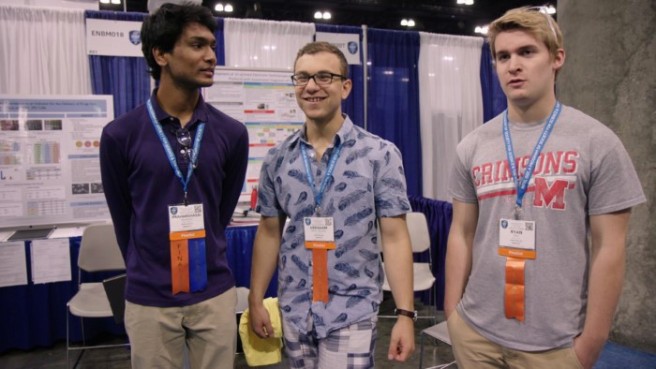 Highly-motivated high school students compete in local and national science fairs for fun and college tuition. They also hope to place in the biggest such event, the International Science and Engineering Fair (ISEF). This inspiring documentary introduces us to several brilliant students, including a Muslim girl stuck in a high school where no one cares about science (and probably not about Muslim girls, either), a German boy working on aeronautics, two kids from Brazil trying to stop the Zika virus, a slacker with poor grades but a talent for AI, and a teacher who pushes her students very hard.

How does this fit into a Jewish film festival? Not at all. It’s part of the Festival’s Take Action Day, but as a relatively apolitical documentary, it doesn’t fit there, either. On the other hand, it’s a very good film.

After the screening, directors Cristina Costantini and Darren Foster, along with Robbie Barrat (the slacker mentioned above), came onstage for a Q&A. Some highlights, edited for clarity and brevity:

I saw the last Festival screening of Science Fair. It will open theatrically in September.

B On Her Shoulders

Nadia Murad lost her family and her way of life when ISIS attacked the Yazidi people. The Yazidi are not Muslims, and genocide was part of the conquerors’ plans. Raped by terrorists, she escaped and now lives in Canada, where she became a symbol of her people. Alexandria Bombach’s documentary follows her as she visits street demonstrations, the UN’s General Assembly, and a Greek refugee camp. We also see her trying to live a normal life despite both her trauma and the unwanted spotlight. I got the feeling that she didn’t really want to be in this documentary.

How is this a Jewish film? It concerns an ethnic and religious minority with a long history of oppression, who lost their homeland, suffered a holocaust, and are now considering the difficult task of returning to a destroyed home. That sounds awfully Jewish to me.

I saw the final Festival screening of On Her Shoulders. But the film has been picked up by Oscilloscope Laboratories, and will likely get a theatrical release.

Note: I’ve fixed a grammatical error in this article.