A- Documentary
Directed by Betsy West and Julie Cohen

Make no mistake, there’s nothing objective about Betsy West and Julie Cohen’s biographic documentary about the life of Ruth Bader Ginsburg. They clearly believe that the Supreme Court’s progressive hero is a rock star, a superhero, and a major bulwark protecting American democracy.

I happen to agree, and that’s at least part of the reason I liked RBG. I probably would not give an A- to a documentary celebrating the wonderfulness on Clarence Thomas, no matter how well done the film. 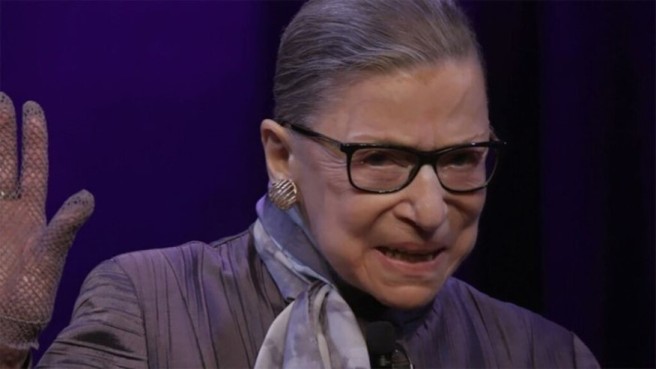 Ginsberg, born Joan Ruth Bader in 1933, fought her way through law school when female students weren’t wanted. As a lawyer, she worked on many cases involving gender discrimination, arguing in front of the Supreme Court six times, and winning five of those. In 1993, Bill Clinton appointed her to a seat on the highest court in the land. She was center-left back then, but as the court moved to the right, her once-common positions became radical.

Filmmakers West and Cohen avoid the conventional, unseen narrator, and instead tell her story through her friends, associates, children, and, of course, Ginsburg. Only a smart part of what we hear from the Justice herself was recorded for this documentary. We see and hear her talk on old television interviews, speeches, and most of all, in her confirmation hearings (chaired by Joe Biden), which become the backbone of the first two thirds of the film.

Here’s something that surprised me: Apparently many young women not only see Ginsburg as a role model, but as a superstar. Just try googling Notorious RBG. One short montage shows tattoos of her likeness. Quite a hip image for an opera-loving octogenarian with no musical talent (although she does have nice things to say about the original Notorious B.I.G.).

Another surprise: Although they disagreed on almost every Supreme Court decision, Ginsberg developed a close friendship with Antonin Scalia – despite their considerable disagreements on the bench. They enjoyed each other’s company. He made her laugh. They rode an elephant together in India. And, of course, they shared that love of opera.

Speaking of people who made her laugh, her husband, Martin Ginsburg, was the funny one of the couple – and the family cook. He was also a lawyer – although he didn’t go in for controversial cases. He died in 2010, and although he couldn’t be interviewed for this documentary, West and Cohen found archival interviews where he discussed his marriage.

Ruth Bader Ginsburg recently turned 85. She works out regularly and has survived cancer twice. Let’s hope she stays healthy long enough to see a President who might nominate someone like her.

2 thoughts on “RBG: The life and importance of Ruth Bader Ginsburg”