I’m not one of those cinephiles who gets excited at every screening of a 35mm print. But when it’s a vintage Technicolor 35mm print…well, that’s exciting.

And it was the print, more than the movie, that drew me to see the 1955 drama, All That Heaven Allows, Sunday afternoon at the Pacific Film Archive. The movie was pretty good too, and historically fascinating. 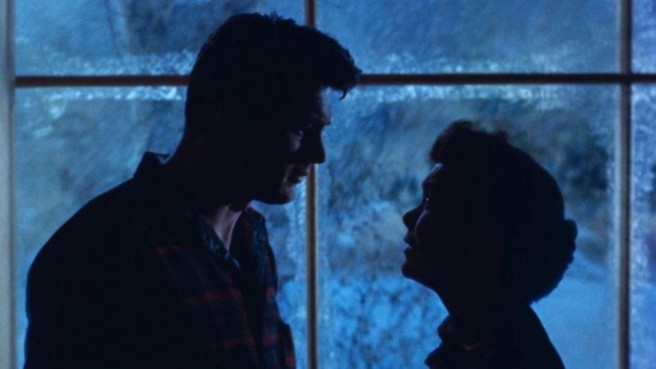 We think of the 1950s as a decade of extreme conformity, but it had its cultural rebels. Heaven, directed by Douglas Sirk from a screenplay by Peg Fenwick, based on a story by Edna and Harry Lee, celebrates those who refuse to conform.

Jane Wyman plays a wealthy widow in a very nice suburban community. She has friends, and even suitors, although none that she wants. She has a son and daughter, both in college, who seem to come home for frequent visits.

Then she starts talking to her handsome hunk of a gardener (Rock Hudson). He lives in an old mill in the woods. Neither he nor his friends worry about money or status. The two fall in love and plan to marry.

And all hell breaks loose. How dare one of their own marry a man who works with his hands, has little money, and is younger than the bride to be? Much worse, her children object, too.

The film is lush, colorful, and just slightly over the top. It’s often ridiculous, but you really become invested in this couple’s happiness. And yet it feels daring for its time. Twelve years later, it would have been a cliché.

And there’s one line of dialog that’s unintendedly funny, because of what we now know about Hudson.

All That Heaven Allows contains two serious flaws. The first, and it’s a common one in 1950s Hollywood: Too much music. Composer Frank Skinner lays the score down thick, making sure that everyone in the audience knows what they should be feeling.

The other problem comes at the end. A seemingly random accident turns the ending in the wrong direction. Perhaps the filmmakers, or the studio, felt that these characters needed to be punished.

I give the film a B.

Now let’s talk about the print.

As was common with big movies at the time, All That Heaven Allows was shot on color film, but the release prints were made using Technicolor’s imbibition (IB) dye-transfer process.

From 1928 until 1975, Technicolor made prints in the pre-photographic sense of the word, as in a printing press. From the original color negative, Technicolor used a photo-engraving process to make three special intermediate prints – one for each primary color. Like a coin, each frame would be thicker in some places and thinner in others. From these intermediates, Technicolor would print the colors onto each release print.

From The American Widescreen Museum

These prints produce gorgeous colors that, in my experience, can’t be found elsewhere – not on digital, not on conventional color film, and not in life. Heaven’s greens and browns look, well, heavenly. And unlike conventional prints, the colors don’t fade.

But like all prints, they do get damaged. There was a fair amount of scratches on the print, but not enough to ruin the experience. Another problem: The print looked a bit soft on long shots. I’ve seen this before in old IB prints, and I don’t know why. One of these days I’ll have to research that.