You’d expect a film that breaks down walls and shatters stereotypes to excite you – to grab you by the heart and fling you across the room. Alas, Maysaloun Hamoud’s first feature film doesn’t quite blow you away. The content – the wild party life of young Palestinian women in Tel Aviva – may seem daring. But the delivery only occasionally lives up to its possibilities.

Lalia (Mouna Hawa) and Salma (Sana Jammelieh) share the same Tel Aviv apartment. They’re rebelling against old traditions, but they’re not doing so consciously. They go to clubs. They dance, smoke – both cigarettes and pot – and drink heavily. Occasionally they snort white powers.

Then Nur (Shaden Kanboura) moves into their apartment and into their lives. She’s religious. She wears a hijab, dresses modestly (Lalia and Salma dress to look sexy), and doesn’t drink or smoke. But Nur isn’t stuck in another century; she’s studying computer science and is used to being around people who don’t share her religious views. 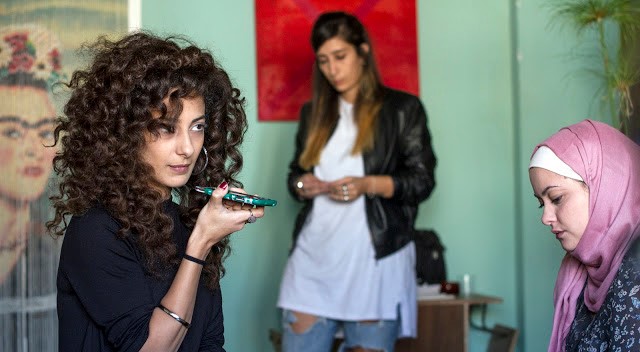 Unfortunately, Nur’s fiancé isn’t so open-minded. He doesn’t like his future wife living with these “sluts.” In fact, he doesn’t really want his future wife studying computer science and having a career. Perhaps under the spell of her modern roommates, Nur begins to suspect that it will not be a happy marriage.

Whenever filmmaker Hamoud focuses her camera on Nur and her problems, In Between works. Nur doesn’t want to give up her religion, or her hijab, and the film doesn’t suggest that she should. But neither does she want to live with a tyrannical chauvinist who just might turn violent.

Nor do Lalia and Salma’s lives look wonderful. Their drug-and-booze-soaked parties have their consequences. Lalia, a lawyer by day, finds what seems to be the right man for her, but he becomes too critical of her lifestyle. Salma isn’t just part of the party scene; she’s a star, working as a DJ and bartender. She’s also a lesbian; a fact that she’s hiding from her very Christian parents.

The film’s problem, however, is that neither Lalia’s nor Salma’s stories are as compelling as Nur’s. Whenever In Between follows the two party girls, it’s flat. I kept thinking “I want to know what’s going on with Nur.” 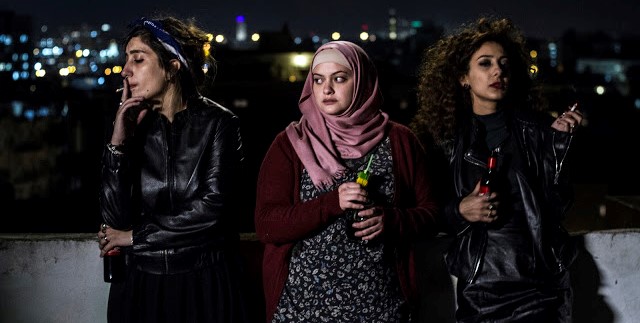 One interesting little tidbit: This is the first Israeli film I’ve seen, set in Israel proper rather than the West Bank, without a significant Jewish character. And yet, occasional moments remind us the racism these three women find in their daily life.