This Finnish film about refugees and those that help and hinder them runs along two very different story threads. Both of them have their good points, but they conflict so badly with each other that they don’t really work together.

The strongest thread follows Khaled (Sherwan Haji), a Syrian refugee who has entered Finland illegally and hopes to gain legal residency. He’s from Aleppo, and most of his family was killed in a missile attack; he has no idea who fired the missile. With his looks, charisma, and acting chops, Haji has the makings of a movie star. He has one of those faces that cameras just love.

Once he enters the country, he goes immediately to the police station to turn himself in. He hopes to get a visa. But things don’t turn out as he had hoped. It appears that the tragedies in his life won’t stop soon.

The movie’s weaker thread concerns the middle-aged Wikström (Sakari Kuosmanen). When we first meet him, he’s wordlessly walking out on his wife. She doesn’t seem to mind much. He wins a fortune playing poker – we’re never told why he’s so good at the game – and uses the money to buy a restaurant.

Unlike Haji, Kuosmanen barely registers any emotion onscreen. We don’t know what he’s thinking, how he’s feeling, or why he became who he is. It’s difficult to care about this cypher of a man.

But this thread finds its groove in the newly-purchased restaurant. The employees, all of whom worked with the previous owner, become something of a very low-key slapstick comedy team. They move in graceful near-accidents. They mix food with cigarettes dangling from their mouths. They hide a dog from health inspectors. One does a Buster Keaton homage gag. An attempt to turn the restaurant into a sushi place is especially funny. 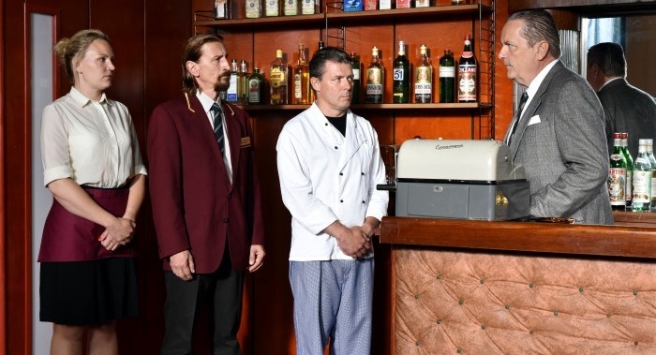 These scenes are very good in their own right, but they stand out awkwardly in what is overall a very serious film. Consider that the gag lifted from Keaton: It’s from a short two-reeler, and it’s exactly the sort of gag that Keaton would ban from his more realistic features. Drama and comedy can work together very well, but this time, it’s more like oil and water.

The movie is about two-thirds through when the two threads finally come together. Wikström finds Khalid sleeping in an alley, and takes him in and puts him to work.

And finally, this cipher of a middle-aged man shows some humanity, even if it’s never visible in his face. He helps Khalid, and he helps others, often spending considerable money to do so.

By the time of Khalad’s second confrontation with the violent white supremacists, anyone who knows anything about movies will figure out what’s going to happen at the climax. And yes, that’s what happens, except not the way you expected it and certainly not the way you wanted it. I supposed I should give writer/director Kaurismäki credit for originality, but since this original approach doesn’t really work, I don’t think I can.

Kaurismäki had some important ideas about refugees that he wanted to express in his film. He should have stuck to Khaled’s story. Either that or made a slapstick comedy.