A musical prodigy and the daughter of a gangster, Rose Marie was a professional singer at the age of three. She was a top performer during the last years of vaudeville, and remained a star in the era of nightclubs and Vegas. Gangsters far more important than her father, including Al Capone and Bugsy Segal, treated her like a beloved daughter.

Knowing her primarily from Van Dyke, I’ve always thought of her as a comedian, and a brilliant one. Her timing on the show was always perfect; but then, so was everyone else’s. I was surprised to discover that she started out as a singer. She was famous for some 20 years before she started to add humor to her shows.

Rose Marie narrates most of this enjoyable documentary, which means that the movie is heavily skewered to her point of view. Other views, including those of her daughter and a childhood friend, are minor.

One would expect a documentary about a comedian, titled Wait for Your Laugh, to discuss the craft of tickling giggles out of an audience. There’s some of that here, especially when the movie covers the Van Dyke Show. Rose Marie, Van Dyke, and show creator Carl Reiner discuss how the cast rewrote the dialog during rehearsals. The documentary shows only a few clips from the show, but offers something even more precious: Home movies, silent, blurry, and in color, of the rehearsals. Even without their voices, we get the feeling of invigorating, hard work. 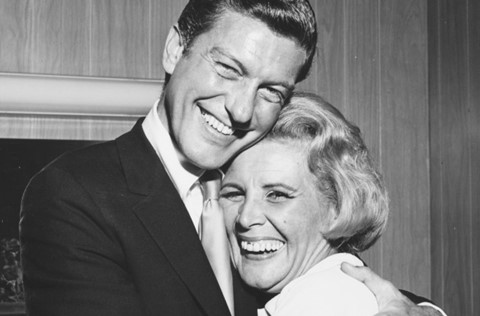 Filmmaker Jason Wise does something else unique for this sort of documentary. As the aged Rose Marie (she’s now 94) describes an incident from the past – say, when she met Al Capone – an actor plays the gangster, moving his lips to Rose Marie’s off-screen remembrances. These newly-shot scenes are in black-and-white, presumably to fit the period of the incident described.

Does that sort of thing break some sort of documentary rule? Hard to say. With a woman’s voice coming out of his mouth, no one is going to think it’s a film of the real Al Capone. You can’t help but be aware that you’re watching a recreation of a memory.

No one tries to play her late husband, trumpeter Bobby Guy. Plenty of home movies capture what appears to have been a very happy marriage. His 1964 death from a blood infection is clearly the tragedy of her life.

She never remarried, and she continued to work as much as she could. And this documentary captures her energy, work ethic, and talent. That’s something worth catching.