A- Family-friendly quest
Written by Brian Selznick, based on his novel
Directed by Todd Haynes

I’m tempted to call Todd Haynes’s latest film Night at the Museum: The Good Version. Like the 2006 Hollywood kiddie flick, Wonderstruck celebrates New York’s Museum of Natural History – which just happens to be one of my all-time favorite museums. And Haynes’ movie is far more magical than the 11-year-old Ben Stiller vehicle, even though nothing in it actually breaks the laws of physics.

Wonderstruck tells two different stories, separated by 50 years, each about a child on the cusp of adolescence. Both kids must escape from a bad home, and find a life for themselves elsewhere. And yes, the stories come together.

In 1977, Ben (Oakes Fegley) lives unhappily with relatives in Minnesota. He suffers from nightmares. His mother recently died in a car accident. She was a loving mother, but she never talked to him about his father, whom he never knew. All Ben can do is imagine.

In 1927, Rose (Millicent Simmonds) lives in a large mansion with her cold and strict father. She’s mischievous, and is obsessed with movies – particularly with one famous movie star. (Ben, on the other hand, loves a lot of stars – the kind in the night sky.) She’s horrified when she discovers that the local movie theater is about to convert to talkies.

The Rose scenes are in black and white, and have no sound accept music. I initially assumed that Selznick and Haynes made that choice to put her closer into the world of silent films. But the filmmakers had another reason: We slowly realize that Rose is deaf, and presumably has been since birth. 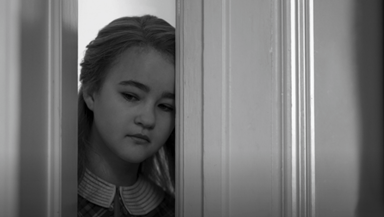 Ben loses his hearing via an accident early in the film, and their shared disability provides another parallel between their stories. Rose, presumably because of her wealth, had never been exposed to the deaf community, while Ben struggles with a new and frustrating way of experiencing the world. Neither of them know American Sign Language.

50 years apart, both Ben and Rose run away from home, go to the strange world of New York City, and gravitate to the Museum of Natural History. And there they will find themselves, and Ben will discover the secrets of his past.

Haynes and his creative team did an excellent job recreating the New York of two past eras – and especially the Museum. I assume that the work involved more than costuming extras. Science museums change over time, and they must have changed some of the exhibits to fit a 90-year-old view of the natural world.

A lot of thought and creativity went into this film. When Ben walks, confused and vulnerable, through the streets of Manhattan, we hear the loud noise of the city. Then the film cuts to Ben’s point of view, the sound becomes distant and muted. One sequence, providing important backstory, is done with simple puppets.

The title Wonderstruck is appropriate. This is an enchanting film.

The I released this review a week too soon. The film will open next week.