Another three movies I’ve seen for the first time recently. Two of them, still in theaters, are based on actual events. The other is an early talkie that makes no attempt at anything like realism. 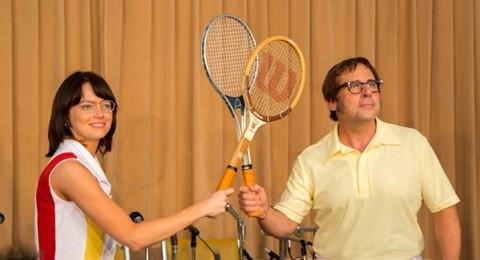 In 1973, former men’s tennis champ Bobby Riggs set up a match with women’s champion Billie Jean King; the point was to prove male superiority. King won. This fictionalized version of one of tennis’ most famous matches, finds the perfect stars in Emma Sone and Steve Carell as the competitors. And while the movie sets us up to root for King, you can’t help feeling sorry for Riggs. He’s passed his prime, and he’s having marital problems. But then, King is just discovering she’s gay (something she couldn’t possibly make public at the time). The movie captures the period very well, and provides a feel-good happy ending for 21st-century audiences.

B Professor Marston and the Wonder Woman (2017), California (Berkeley)

Rene Clair’s 1931 musical comedy doesn’t stand up to his silent classic, The Italian Straw Hat, but it’s frequently quite funny. Like a lot of early talkies, it has pacing problems, but its problems melt away in the hilarious final act, set backstage (and sometimes on stage) at the Opera. In fact, I can’t help wondering if this sequence inspired the climax to A Night at the Opera. The plot involves a starving artist with creditors breathing down his neck, who suddenly wins the lottery. The trouble is that the ticket is in a coat that his girlfriend has just given away.