The police murder of Michael Brown rocked the town of Ferguson, Missouri – and the nation. This incendiary and totally-biased documentary does more than tell you the story. It puts you on the ground with the people that marched, protested, and rioted as their city became a symbol of all that’s wrong with America.

Let me make myself clear: My sympathies are entirely with the people of Ferguson, and my contempt goes to the police department that made their lives a living hell for years. I give this film an A- because it’s a well-made and powerful work of activist cinema. I doubt I’d give such a good grade to the Fox News version. But as my review of Where to Invade Next proves, I can pan a documentary that preaches what I believe.

Whose Streets deserves no such panning. It puts you on the ground with the shocked community.

Brown’s body lay on the street for hours before police called an ambulance. Protests built quickly in this predominantly black town with a predominantly white government and police force. Then the protests turned into riots. When a grand jury refused to indict the killer – under very suspicious circumstances – more riots broke out. The city became a warzone.

Smartphones and social media have changed the nature of street action. The images of protests, civil disobedience (primarily blocking freeways), and riots were largely captured from the people in them. The sense of being in the middle of everything is palpable. Yes, there’s footage from TV newscasts, but they’re never as powerful as the events captured by the participants. 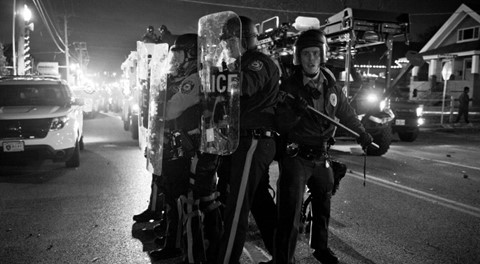 Whose Streets doesn’t have a conventional narration, but it has many people telling their stories in interviews shot by the filmmakers. Brittany Ferrell, a single mother and a nursing student, catches your eye first in a line of protesters, more determined and charismatic than the rest. A lesbian, she takes time out from protest to marry another woman.

Most people of good will can support the protests and civil disobedience, but it’s much harder to condone riots. One woman interviewed does just that, calling it non-violent so long as no one was physically hurt. Others condemn it, but understand why it happened. 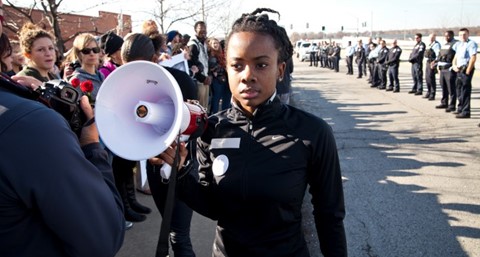 The film takes the protesters’ side at all times, even to the point of losing accuracy. For instance, you’d never know from the film that Brown might not have raised his hands in surrender.

But even with his hands down, there’s no reason to fire 12 bullets into an unarmed man standing a considerable distance from you.

There’s no question that the Ferguson police force was rife with racism (and probably still is). Darren Wilson, the officer who fired all those bullets, justified his actions (in a TV news interview shown in the film) by claiming that Brown had “demon eyes.” I doubt he would have said that about a white man. Other cops, and politicians, proudly wore Darren Wilson bracelets. 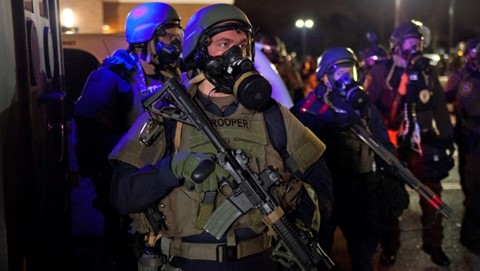 Whose Streets doesn’t go into too much detail about the situation. It doesn’t explain how a town can have a black majority but a white – and actively racist – government. But it helps you feel what it’s like to live in a community where the police see you as the enemy, and you just can’t take it anymore.

Whose Streets gets its Bay Area premiere in a free screening at the New Parkway, Wednesday, August 9, at 6:30. It’s regular theatrical run starts Friday, August 11.

One thought on “Whose Streets: Ferguson and America”