In 1978, Michael Gates of Dawson City stumbled on a huge collection of 35mm nitrate film, buried in a former swimming pool below a torn-down ice rink. The once-thriving Yukon mining town sits less than 200 miles south of the Arctic Circle. The film stock was much too cold to melt, let alone ignite. The movies were, to a certain extent, preserved.

And there were hundreds of them – 507 reels in all. Most of them were considered lost films before they were discovered in Dawson City. For silent film preservationists (they stopped putting film in the swimming pool in 1929), this was an incredible haul.

Bill Morrison’s new documentary, Dawson City: Frozen in Time, has two stories to tell. One, of course, is the story of movies found. The other is of the town itself.

White settlers started building Dawson City in the 1890s, pushing out the original inhabitants. It soon became the center of the Klondike Gold Rush. It was a boom town for a few years, but most of the population disappeared with the gold.

The other story is about the movies. How they ended up below a hockey rink. How they were discovered. And the condition they were in.

Although the extreme cold protected the nitrate film from the usual ravages of time, the swimming pool caused its own problems. Most of the films suffered from water damage, which removed much of the emulsion. A silent film with large, white spaces is likely from Dawson City.

Morrison made two major mistakes that keep me from enthusiastically recommending the film. Alex Somers’ highly repetitive music score, which plays over most of the movie, sounds like an exceptionally boring funeral dirge. It rarely matched anything on the screen (the occasional sound effects helped a good deal).

The other problem – a lesser one – is Morrison’s decision to use superimposed intertitles in leu of vocal narration. It created a distancing effect that takes you out of the story.

On the other hand, these intertitles provided some fascinating information. Two of the great early movie palace builders, Sid Grauman and Alexander Pantages, lived in Dawson City as young men. And Donald Trump’s family fortune apparently started with a Dawson City hotel.

The intertitles also provide interesting and important bits of film technology history. They go into surprising and fascinating detail on the invention and manufacturing of nitrate film. 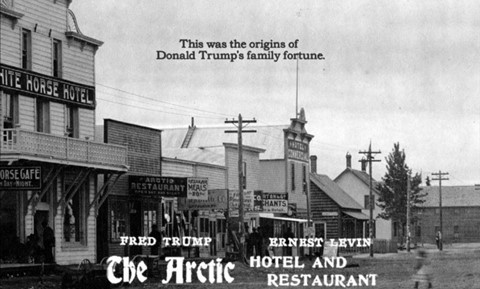 But those nuggets of information could have been just as interesting, and more human, if spoken. Michael Gates and his wife, Kathy Jones-Gates (they met researching the film stash) offer some spoken narration at the beginning and (for a longer time) at the end. The film comes more alive with their friendly voices.

Morrison, who also edited, did some clever things with clips from the discovered films. When the story turns to the rise of newsreels, he offers a montage of people reacting to headlines. And when we learn about reels of film thrown into the river, we see a fight in a pirate movie with one buccaneer throwing a treasure chest overboard.

There’s a lot to like about Dawson City: Frozen in Time. It’s a great story. But it could have been told better. 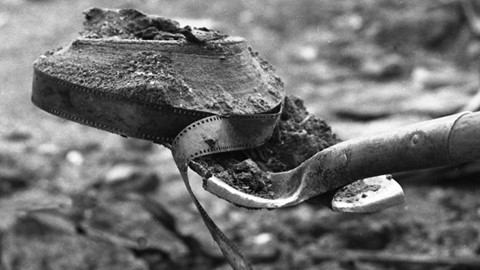