I love the San Francisco Silent Film Festival, but it can be tiring. You spend all day, three days in a row, watching movies. Sometimes the breaks between films are less than half an hour. But the movies, the music, the discussions, and the people you can talk to make it very special.

This year’s Festival presented a lot of color. Most of the films were tinted, and many had toned scenes, as well. Some even had hand painting, stencils, and other technologies that added color to specific objects in the frame. And I finally got to see images that were tinted and toned, creating a beautiful two-color effect. This image from Filibus, screened Saturday, should give you an idea of the effect:

If you don’t know what I’m talking about, this webpage will help.

I’ve already told you about what I saw on Thursday, Friday, and Saturday. But Sunday was the last, best, and for me, the longest day of this year’s Festival. I stayed for all six features – 13 hours including breaks. On that day, I discovered three great films I hadn’t seen before, enjoyed new restorations of two movies I already knew, and suffered through one real turkey.

Here’s what I saw Sunday: 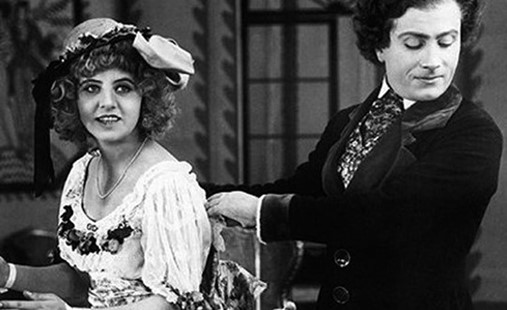 In one screening, this immediately became my favorite Ernst Lubitsch silent. It’s a very broad comedy, with its stage-like, clearly-fake sets, and it makes no attempt to be realistic. Even the horses are clearly people in costumes. A young man, pressured to get married, buys an astonishingly life-like doll as his pretend bride. What he doesn’t know is that she isn’t a doll, but a real woman, and one in love with him. There’s even a Seven Chances-like chase, six years before Seven Chances. The theater roared with laughter.

On one level, The Doll is a family-friendly fantasy – completely safe for young children. But for adults with appropriately dirty minds, it’s a raunchy, adult comedy. I give it an A.

The musical accompaniment by Guenter Buchwald and Frank Bockius helped add to the mirth. 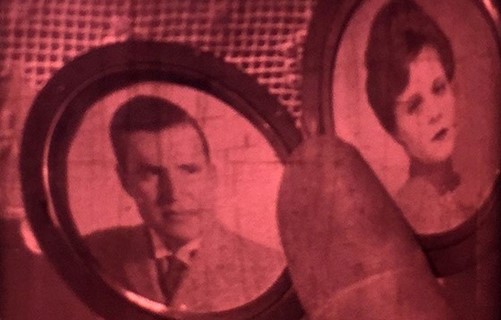 This Cecil B. DeMille production, directed by Rupert Julian, is the sort of overacted, overwrought, and overcooked melodrama that the uninitiated imagine silent movies to be. It’s puritanical, simplistic, and tissue-paper deep – with a happy ending that basically says that no one need have worried about anything that happened before.

I give Silence a D-.

At least we had the Mont Alto Motion Picture Orchestra to provide good music for the bad movie. The Orchestra did something daring and experimental early on, playing only sound effects throughout the first scene. That was interesting and effective, but I was glad when they switched to music.

A Man There Was

Victor Sjöström (known as Victor Seastrom during his Hollywood period) became a major director with this epic, based on a Henrik Ibsen poem. The story of a man of peace in a time of war, it moves from joy to tragedy to revenge to redemption. Beautifully shot on the rugged Scandinavian coast, the landscape appears to be as cruel and uncaring as the historical forces that grind down the fisherman and family man at the story’s center (played by Sjöström, himself).

This time, the Matti Bye Ensemble hit it on the nose. Their surreal, moody, electrically-laced style fit this story much better than it did Potemkin (see my Saturday report). It was a great score. 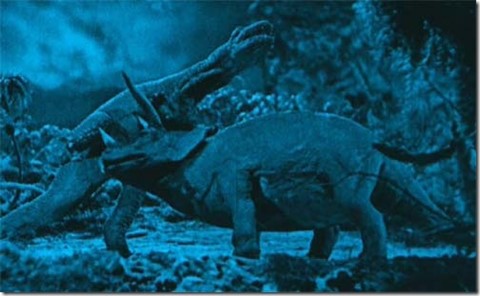 Before the movie started, Serge Bromberg took the stage to discuss the new restoration. Others did the same throughout the Festival, but none were as entertaining as Bromberg. He explained how the movie was greatly shortened in the early 1930s, and the struggle to find more and better footage. Every time he thought he had everything he needed to make a near-complete version, more footage would pop up somewhere. He managed to turn that into a running joke. (He also, to demonstrate how old movies disappear, lit a piece of nitrate film on fire. That stuff burns like crazy.)

The new cut runs about 100 minutes – that’s an improvement. The fun lasts longer, and the story is more coherent. But it’s still a 1925 version of today’s big blockbusters – an impossible story, with colorful but shallow characters, great action, and amazing special effects.

Unfortunately, Hollywood racism was more obvious in the 1920s. There’s a servant character in blackface.

Not every film works with the Alloy Orchestra, but The Lost World fit their strange musical styling just right. 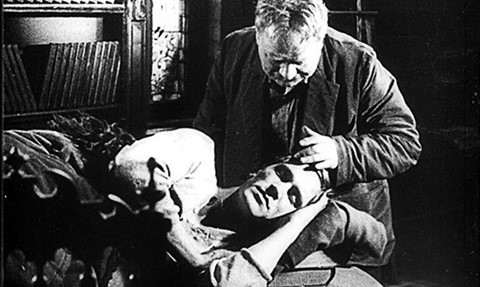 This Soviet/Ukrainian film, directed by Heorhii Stabovyi, was my biggest discovery of the Festival. This one truly
caught me by surprise.

The story is set during the Revolution, as the ruling class collapses and Communism sweeps the Russian empire. When an aristocratic family flees, they leave a trusted servant behind. But things get complicated. The pampered, rich young son returns, desperately in need of hiding. Then a Bolshevik regiment, led by the servant’s estranged son, arrives to take over the estate.

Two Days offers surprisingly negative views of both sides in the conflict, although in the end the old regime comes off the worst (that was probably required by the government censors). But it’s not really a political movie. It’s about a peaceful man caught between two wrongs. It’s sad, tragic, and emotionally wringing. But then, that’s what war is like.

The 35mm print looked washed out. With little-known silent films, you often have to take what you can get. 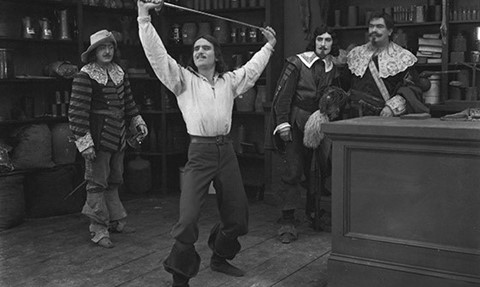 This was my third time seeing the movie, but my first in maybe 25 years. Each time I’ve seen it, it’s been in a big, old movie palace with live accompaniment – as it should be.

The movie comes to wonderful life whenever Fairbanks is in the shot. His self-mocking humor, athleticism, and charisma lights up the screen. He plays d’Artagnan as a naïve, hot-headed country lad quite out of place in urban Paris. But he has a stout heart and he’s the best swordsman around. Unfortunately, when Fairbanks is not on screen, the movie becomes stilted and boring. That’s what you often get when the star has total control.