Here’s what I saw Friday at the San Francisco International Film Festival:

I couldn’t help wondering if this Mexican character study was influenced of Kurosawa’s Ikiru. The main character – the only real character in the movie – is a city bureaucrat completely cut off emotionally from the rest of the human race (Adriana Barraza). At work, people wait for hours to hand her their filled-in forms, and she nitpicks, finding the slightest mistakes so that she can sent them back to wait hours more. She appears to have no friends or relatives. She gives some affection to her cat, but when the cat dies, she seems to take it in stride.

Every so often she goes to a swimming pool, perhaps to connect to others, but she seems reluctant to jump into the water. I think that’s a metaphor for something.

In the later part of the film, her behavior seems to be improving just a little bit. But why?

The movie provides very little reason to care for her, and there’s no story in the conventional sense. But her loneliness moved me, even when the people whose lives she hurts made me boil with anger.

I give Everything Else a B.

A Tribute to James Ivory: Maurice

James Ivory is the last living member of the great filmmaking trio Merchant Ivory. Ishmael Merchant produced. Ruth Prawer Jhabvala wrote most of the screenplays. James Ivory directed. Over a collaboration that spanned nearly half a century, they made thoughtful, entertaining films set in many places and times.

And yet, they are best known for a handful of movies about upper-class Brits in the late 19th and early 20th centuries. The name Merchant Ivory has become a synonym for the whole genre of British period pieces. None of the three are British; in fact, Ivory was born in Berkeley.

As is usual with Festival tributes, the event started with a clip reel. Oddly, the clips were all musically oriented, and none of them were set in England.

After the clips, James Ivory and David Darcy sat down for a talk, followed by a Q&A with the audience. Some highlights, edited for clarity and brevity: 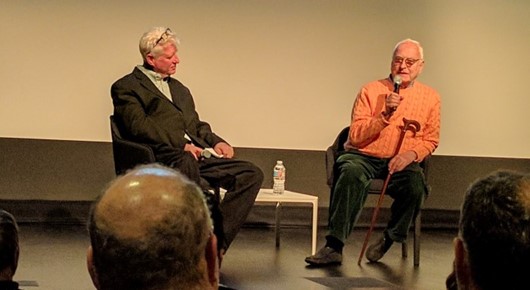 And then they screened the movie.

Set in England in the early 20th century, Maurice feels like an epic, even though it concentrates on one man wanting desperately to come out of the closet – at a time when doing so would land him in prison. Maurice (James Wilby) meets Clive (Hugh Grant) in college, and they fall in love. The nature of their “friendship” has to be hidden. Over the years, Clive reconciles to a conventional married life. But Maurice, now a successful stockbroker, can’t bring himself to the do the same. Stiff upper lips abound, with real emotions bubbling up when they can no longer be contained.

I loved this film. I give it an A.

Maurice, originally released in 1988, recently received a beautiful 4K restoration. The film will be re-released in theaters in the near future.