There’s also the Oakland Film Festival, which I somehow missed until this morning. It opened Tuesday and closes tomorrow.

Outside of the festivals, I’d have very little to talk about if it weren’t for the New Parkway.

When I was a teenager, Melvin Van Peebles was a friend of the family. My stepfather cut the sound effects on Watermelon Man, Sweet Sweetback’s Baadasssss Song, and Don’t Play Us Cheap. But I never had a chance to see his first feature, made in France. Tonight, hopefully, I’ll get my chance. San Francisco International Film Festival.

James Cameron’s first hit provides non-stop thrills that keep you on the edge of a heart attack. Arnold Schwarzenegger plays the title character–a heartless machine sent back in time to murder the future mother of the man who will save humanity. Simple, straightforward, and modestly budgeted (three things you can’t say about recent Cameron pictures), The Terminator maintains an internal logic rare in time travel stories.

Modern concepts of equality come face to face with ancient customs in this New Zealand fable. Within a 21-century Maori community, a young girl (Keisha Castle-Hughes) sets out to learn and practice rituals intended only for men. Despite the PG-13 rating – earned by one use of the word shit and a marijuana joke you could miss if you blink – this is a family film.

Dziga Vertov’s documentary of people at work and play uses strange and comical double exposures, visual effects, and maddeningly-fast editing to keep things lively. Or is it a mockumentary? The movie often follows a cameraman making a documentary of people at work and play. The result is exhilarating, entertaining, and, of course, Communist propaganda. Vertov paints a picture of the Stalinist USSR as a place where people work hard, then play hard in healthy activities. No starving Ukrainians here. DeVotchKa will provide live accompaniment with a new score by Nick Urata. Part of the San Francisco International Film Festival. 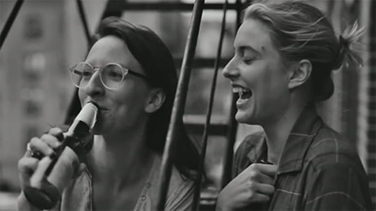 This Greta Gerwig/Noah Baumbach comedy studies that period when you realize that you’re actually an adult. The title character (played by Gerwig, who also co-wrote the screenplay with director Baumbach) has been out of college for a few years, but she’s living on unrealistic dreams, and unlike her best friend, doesn’t seem ready to make that difficult transition into maturity. There’s no plot; just an assortment of incidents–jobs, places to live, men to sleep with–as she moves slowly and reluctantly into true adulthood. The result is quirky, touching, and funny. The Sunday screening will be followed by a Bechdel Test Movie Night discussion.