I caught three of the four movies screened at Noir City Saturday. To varying degrees, I liked all of them.

I missed all but the last 15 minutes of Kansas City Confidential, and not only because I’ve already seen it. I was marching in the streets of Oakland before the lure of noir got to me. From what I saw when I got to the Castro, the 35mm print looked great.

But here are the movies I did see:

Three criminals, one played by Lee Marvin, converge on a small town with plans to rob a bank. The town appears to be Payton Place, with all sorts of seemingly normal folk having all sorts of issues, including infidelity, alcoholism, voyeurism, and kleptomania. Victor Mature plays the nominal hero, and gets top billing, although I don’t think he gets any more screen time than several other characters. Ernest Borgnine appears to be enjoying himself as the head of an Amish family.

This was my first experience seeing an early CinemaScope movie presented theatrically as it was originally shown: 2.55×1 aspect ratio, with the original four-track stereo sound. Every other time I’ve seen one in a theater, it was cropped to 2.35×1 (the CinemeScope ratio after 1957), and most of those times with mono sound.

Why were 20th Century-Fox and the Castro able to present it as it was meant to be seen and heard? Digital projection. Violent Saturday was screened off a 2K DCP. It looked very much like early CinemaScope and Eastman Color Negative.

There was a long break between the matinee and evening shows. I spent part of it at the mezzanine, where I browsed books on sale from Green Apple Books. Many of the pulp-like covers evoked the world of old-fashioned noir. 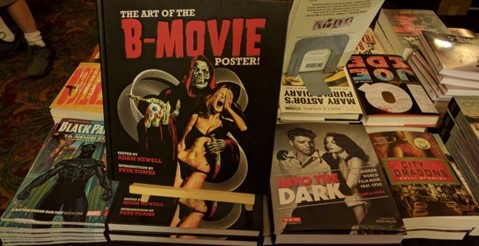 You can also buy a hat at the Castro’s mezzanine during Noir City. But this year, someone came up with an unusual way of selling them. 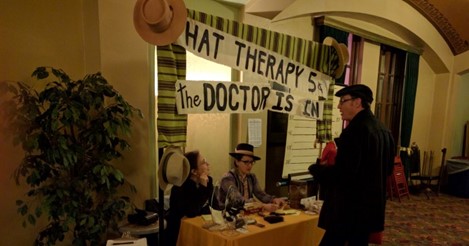 The evening double bill spotlighted Italy. And the first film of the evening, Four Ways Out, was written in part by a young Federico Fellini.

Festival head Eddie Muller started his introduction imitating Marlon Brando in The Godfather. Then he told us of his struggles to get the one existing, English-subtitled print of the 1951 film. After all sorts of troubles, the print finally showed up on Muller’s doorstep three days before the screening.

All that trouble turned out to be worth it. It was a very good 35mm print. 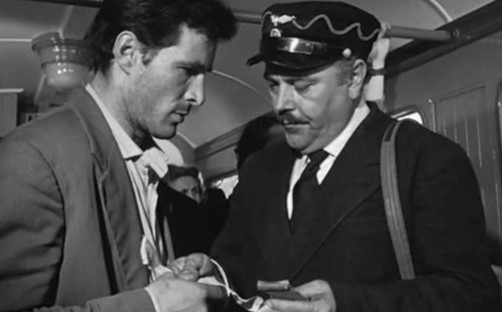 Crime really and truly doesn’t pay in this neo-realistic thriller. Four men rob a racetrack, then split up in the rush of the getaway, with only some of them possessing loot. The story follows each man as he tries to get his share and avoid the police. And each man finds either prison or death.

Caper movies (the theme of this year’s Noir City) need not be tragedies like Four Ways Out. The caper comedy has a long history. Now that I have finally seen Big Deal on Madonna Street – a movie I vaguely remember my mother liking – I can call it the best caper comedy masterpiece.

Four exceptionally inept crooks (including a pre-Fellini Marcello Mastroianni) set out to rob a pawn shop by breaking into an adjacent apartment and drilling through the wall. Meanwhile, another crook associated with them deals with prison and, once he’s out, going at it alone. These people couldn’t do anything right. But the filmmakers could. The audience was in hysterics from beginning to end.

Unfortunately, Noir Ciy was not able to get either a 35mm print or a DCP of this 1958 comedy. It appeared to be projected off of a DVD. The image had a video sheen and little detail. The English subtitles looked especially horrible, with a staircase effect caused by large pixels blown up to too big a size.

So, technically speaking, Saturday’s movies presented digital projection at its best and at its worst, and 35mm as it should be shown.

Artistically speaking, the first movie was good and each one was better than the last. And the best film had the worst projection. That happens sometimes.