Screenwriters must rethink novels entirely to turn them into movies, because cinema and prose fiction are entirely different beasts. But a stage play, like a movie, consists of dialog and action, requires actors, and must fit into an evening’s entertainment. Screenwriters need only find excuses to “open up” the play to more locations.

And yet, when they do that, they risk getting a movie that feels very much like a stage play.

Tuesday night, my wife and I saw Fences. We loved it. I’m giving it an A-. But the film kept reminding me that I was watching something intended to be experienced on the live stage. 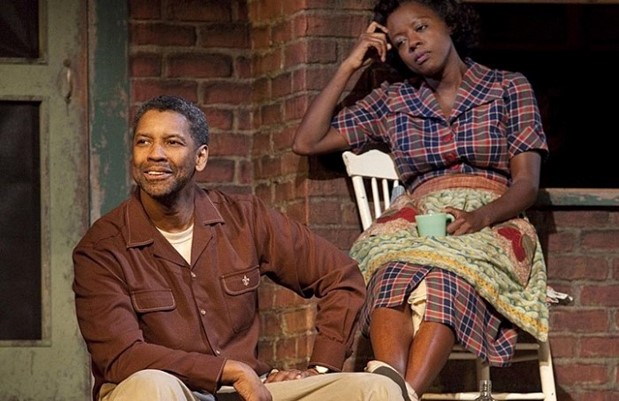 Both the play and the screenplay were written by August Wilson, and I suspect not much changed. Almost the entire story takes place in the main characters’ home and backyard. There’s a lot of talking in Fences. The characters seem inclined to explain a lot of things, delivering several monologues.

The feeling that I was watching a stage play occasionally took me out of the story. And yet, it was better than a stage play. Because it was a film, I could see the actors’ faces in far greater detail than live theater allows. The close-up is one of cinema’s greatest strength, of course – arguably its greatest strength. But it also made much of the dialog, and especially the monologues, feel artificial.

The powerful cast, headed by Denzel Washington and Viola Davis, made the wordy script work. Washington also directed, and did wonders with guiding both the cast and the camera.

Washington plays a bitter man whose life didn’t turn out the way he wanted. He prides himself on supporting his family, but he behaves surprisingly cruel to his son (Jovan Adepo). Davis plays his good-hearted but long-suffering wife. This is all set in the 1950s, when African Americans had considerably less options than they do now, but still more than they had when the main characters were young.

It’s the story of a driven man who believes he is a good man. But his obstinate character only hurts the people he has worked hard all his life to support.

About two thirds through, the film opens up and feels less like a play. A montage shows us changing seasons. Scenes become shorter and less talkie, and as they do so they become stronger. And then it becomes more of a play, again. Had Wilson cut more dialog and depended more on visuals, Fences would have been a better film. On the other hand, there’s a strong beauty in that dialog that would make it difficult to cut. The decision to make Fences more of a movie or more of a stage play must have been difficult.

Fences is very much an actor’s film, directed by a great actor. The theatrical feel may force you to suspend your disbelief a little harder, but the experience of getting to know these people is worth that suspension.

The last four new films I’ve seen theatrically – Loving, Hidden Figures, La La Land, and Fences – were all shot in 35mm. Not only that, but they were all shot in Panavision – a 35mm widescreen format popular in the 60s, 70s, and 80s. As cinema goes digital, a surprising number of filmmakers are embracing older technologies.