The Marx Brothers used comedy to deflate the pompous and tear down the establishment. They turned respectable, upper-class society into anarchy and surrealism. They also made us laugh.

The brothers honed their comedy in vaudeville, jumped to Broadway, and made the leap to Hollywood at the height of the talkie revolution. They made their first five films at Paramount–the earliest surviving records of Marxist comedy that show them in their purist form. 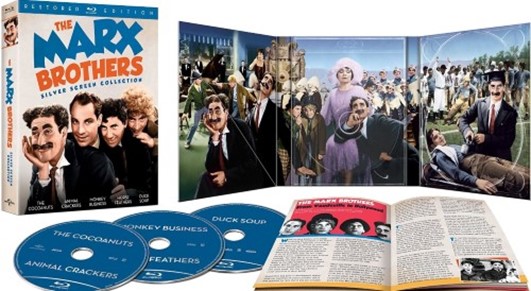 Universal, which owns most Paramount films from that era, has restored these films and released them in a Blu-ray boxed set: The Marx Brothers Silver Screen Collection.

Finally, these films get the home treatment they deserve.

All five movies provide a wonderful female foil for Groucho. Margaret Dumont, the greatest straight man (actually a woman) of all time takes that role In The Cocoanuts, Animal Crackers, and Duck Soup. In Monkey Business and Horse Feathers, the beautiful and talented comedienne Thelma Todd spars with Groucho.

Their first film–an amateurish effort with occasional scenes of brilliance–only hints at the laughs to come. But It’s fascinating to watch, if only for historical perspective.

The Marx Brothers first tried a long-form, story-based show in 1925 with the Broadway musical The Cocoanuts. In 1929, the Brothers filmed the play in a Queens studio during the day, while performing their second play, Animal Crackers, on Broadway at night. This is a very early talkie; the opening credits brag that you’re about to see “A Paramount Sound Picture.”

Cocoanuts suffers from the bad audio, static staging, and utilitarian photography of the transitional period–despite a few attempts at visual flair. The movie spends too much time on the stupid jewel-thieve plot and on the songs–none of which are song by the Marx Brothers (Harpo and Chico do get to play their harp and piano solos). Groucho’s usually brilliant timing fails him often in this movie; perhaps he wasn’t yet comfortable performing for a group of technicians trying desperately not to laugh.

But the non-speaking Harpo–the only member of the cast who didn’t have to worry about standing near a hidden microphone–gives his best screen performance. Whether he’s drinking ink, stealing handkerchiefs, or “swimming” across a perfectly dry room, he’s both hilarious and transcendent.

Like The Cocoanuts, the Marx Brother’s second movie is a crude adaption of a Broadway play. And yet it’s a vastly superior film, and one of their best.

For one thing, it’s a better play. Set in a big high-society party, Animal Crackers understands what Marxist humor is all about: taking all that is respectable and turning it upside down. 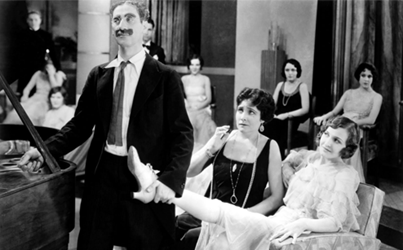 Technically, it’s nowhere near as crude as The Cocoanuts, with considerably better sound. And all four Marx Brothers now seem comfortable on a soundstage. Their timing is impeccable.

The new restoration brings back almost two minutes of previously missing footage–mostly risqué dialog removed by the Hayes Office years after the movie’s original release. It’s great to have it back.

The first Marx Brother film not based on a stage play starts off as one of their best. But it fails to maintain momentum.

Here the Brothers play stowaways on an ocean liner. While the crew chase the stowaways, Groucho and Chico break into the captain’s cabin and insult him while they eat his lunch.

There’s a plot involving rival, good and bad gangsters. The bad gangster is married to Thelma Todd, which doesn’t stop Groucho’s flirtations. “Young lady, you’re making history. In fact, you’re making me, and I wish you’d keep my hands to yourself.”

But the movie slows down when everyone makes it to dry land and high society. Too many characters onscreen seem to enjoy the Brothers’ antics, which makes them less funny for the movie audience. On the upside, Groucho and Todd have another wonderful scene together. But the ending is a complete loss.

At Huxley College, the professors are pompous windbags with beards and mortarboards, while the students care only about football. But with Groucho running the college, nothing can be taken seriously. This is one of their funniest.

For the first time in a Marx Brothers movie, the plot doesn’t interfere with the fun. Necessary exposition runs by quickly and efficiently. 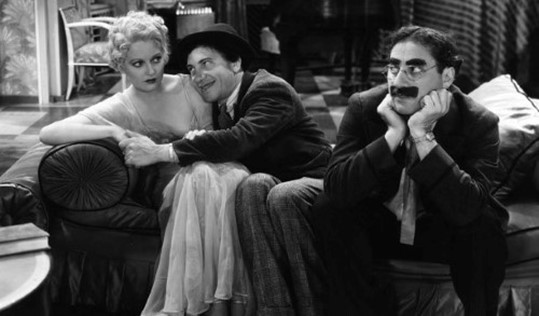 Horse Feathers does something unique musically for a Marx Brothers film. Each brother gets to perform their own rendition of the film’s romantic song, Everyone Says I Love You.

Unfortunately, some footage was lost over the decades. Jump cuts and lost words interfere with one of the movie’s best sequences, ruining the precision timing. Perhaps one day a complete version of this scene will turn up. Let’s hope so.

The Marx Brothers’ masterpiece takes place high in the government of the mythical country of Freedonia. Could there be a better setting for attacking the self-important and pompous?

The film has no romance, little exposition, and even lacks the piano and harp solos in every other Marx Brothers movie. I won’t go into details on this one. I’ve already written about it.

These films are over 80 years old, and for the most part they have not been well preserved. Universal presents all five movies in 1080p, pillarboxed to about 1.33×1.

Animal Crackers, restored from a duplicate negative found in England,
looks breathtakingly beautiful from start to finish. The other four movies vary in quality. Some scenes look great; others look horrible. Most of the time, they’re acceptable but not extraordinary.

The Cocoanuts suffers from a lot of noise and an extremely small dynamic range. But what can you expect from a 1929 talkie.

The other movies sound as good as one could reasonably expect, considering their vintage.