B+ Music biopic (sort of)

Don’t expect anything like Ray or Walk the Line in this totally crazy story of Miles Davis in a turning point in his career. It’s more like a raunchy caper comedy set in the 1970s, but with great music and a few realistic flashbacks.

After five years in seclusion, Davis’ non-productive, hermitic lifestyle is interrupted by a music journalist (Ewan McGregor) hoping to get an interview . From the reporter’s point of view, the timing couldn’t be better. Davis has a tape of his first album in years, and no one else has heard it. The great musician, now strung out on coke, wants to be paid, but CBS Records won’t put up any more money without hearing what he’s done. 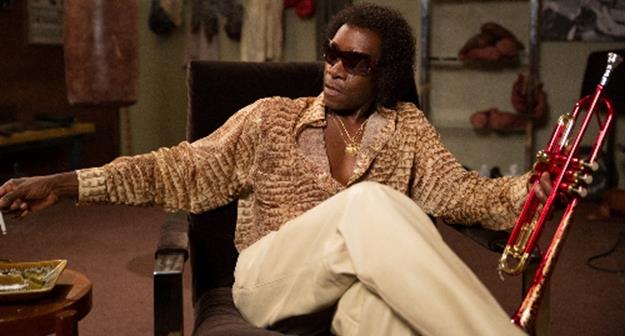 Then a couple of sleaze balls steal the tape, and Davis and the reporter set out to retrieve it. Their quest involves shootouts, drug deals, paying for cocaine by signing LPs, and even a car chase.

The tape essentially becomes Miles Ahead‘s McGuffin–the physical object that everyone wants and thus turns the plot. But that part of the film stretches credibility. Who would possibly think they could violently rob and attempt to kill Miles Davis, and then try to sell the original master tapes that they stole from him. It’s like stealing and trying to sell the Mona Lisa; everyone knows that it’s very hot and that you’re very guilty.

The flashbacks all turn around Davis’ tumultuous relationship and marriage to Frances Taylor (Emayatzy Corinealdi). These scenes are played straight, and help anchor the silly story with at least a semblance of reality. It’s only here that Davis comes off as a fully-formed human being–although not always a good one. We have no trouble understanding why Taylor left him.

Don Cheadle gives an excellent performance (has he ever given anything else) as both the charming musician who successfully charms Taylor into marriage, as well as the crazy, coked-out has-been waving a gun at anyone who gets in his way. This is Cheadle’s project; in addition to starring in it, he directed, co-produced and co-wrote it.

McGregor is a good actor with a likeable presence, but I found the casting choice worrisome. I wondered if the money people insisted on a white sidekick.

Although I like Miles Davis’ music, I came into Miles Ahead without knowing anything about his personal life. I suspect I still don’t. As near as I can tell, McGregor’ reporter is completely fictitious. Much of the rest of it smacks too much of a good story to be believable.

One thought on “Miles Ahead miles away from a biopic”