Scandinavia created more than just democratic socialism. In recent years, it’s also created some exceptional thrillers–Headhunters being the best of them. Norway’s latest heart stopper almost reaches that level of frightening entertainment, but then it sags in the final stretch.

The Wave belongs to that particularly expensive-to-shoot subgenre of the thriller: the disaster movie. A horrendous tsunami hits the small tourist town of Geiranger, causing huge damage and killing a lot of people. If you’ve seen enough disaster movies, you’ll be able to guess who lives and who dies. 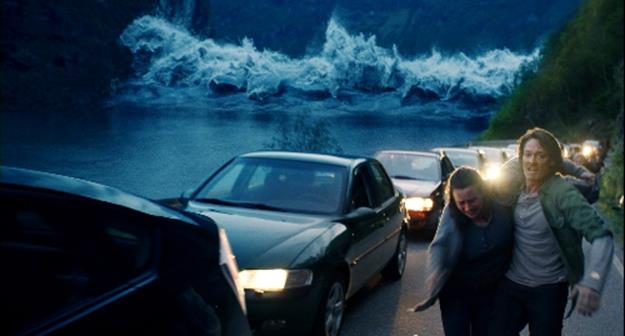 (By the way, Geiranger is a real place. Part of the film is actually shot there. Why the city cooperated I’ll never know.)

The movie starts strong as the filmmakers make us wait for the titular disaster. We get to know the hero, Kristian (Kristoffer Joner), along with his wife and kids. We become emotionally invested in them. Everything is tranquil and pleasant. But you know disaster is coming even if no one on the screen sees it.

Kristian is a geologist, and we meet him only days before he moves to the big city, where he’ll be working for an oil company. We follow him on his last day on his old job, as part of the geological team monitoring seismic activity in the area.

But on that last day, he notices some troubling irregularities. The day after that, as he’s about to leave town, he finds more problems. He warns his former co-workers, but they’re reluctant to press the big red button. It could hurt the tourist industry.

Dread builds slowly throughout this first part of the movie. Of course the thumping music cues us in that something horrible is going to happen. That’s The Wave’s first tired cliché, but it works, so I’ll let it slide.

But one thing about this first act bothered me. Out of a whole team of geological experts, whose job it is to warn people of coming disaster, only Kristian isn’t completely incompetent. How many times can someone see numbers that suggest impending disaster and decide that the instruments are at fault?

The Wave hits its high point when the giant mass of water forces itself through the fiord with deadly power. People desperately drive to high ground, only to be caught in a traffic jam. Cars flip. The fancy tourist hotel becomes an ghostly wreck. And Kristian has to decide between staying close to his young daughter, helping a friend, and going back to save his wife and son.

The special effects are, as one would expect, magnificent. The giant wave isn’t the one smooth wall of water we associate with Pacific Ocean tsunamis. This one is moving through a rocky fiord, with giant splashes of white water.

But once the big muddy washes over town and Kristian sets out on a post-tsunami rescue mission, The Wave becomes a collection of disaster movie clichés. I don’t think there was a single moment in the last half hour that I didn’t see coming.

And then there’s the inherent ethical problem with all disaster movies. They deliver a spectacle of mass death, but everything is okay at the end because the main characters survive.

The Wave comes in slowly and effectively. Then it crests with a gush of high excitement. But it ends with a ripple of foam.