Who supplied the addictive riffs on “Da Doo Ron Ron,” "California Dreamin’," “Bridge Over Troubled Water,” and the theme music for Mission: Impossible? Despite what it says on the LP sleeves, much of the inspiration came from an unsung collection of Los Angeles session musicians informally called The Wrecking Crew.

Denny Tedesco, the son of Wrecking Crew guitarist Tommy Tedesco, introduces these successful but little-known musicians in this mostly entertaining documentary. He interviews surviving members of the group, mixes in old footage, and explains the origins of the songs that became the background track of our youth.

And if you’re thinking "Maybe your youth; not mine," you’re probably right. If you’re not a musician, a musicologist, or a baby boomer, this movie isn’t for you. But for me, a boomer who became a teenager in 1967, almost every tune brought back memories, then filled in details about those memories that I had never before thought about.

Not surprisingly, filmmaker Tedesco spends a good deal of the film’s time on his father, who died in 1997. Aside from being a brilliant musician, Tommy Tedesco was a funny guy. He clowned around in the studio, in seminars, and on TV on the Gong Show. He’s inherently fun to watch.

But my favorite of the profiled musicians was Carol Kaye, a woman working in a predominately male industry in the decade where Mad Men is set. Starting out as a jazz guitarist and turning to bass as she moved to rock, her driving riffs filled in many a great song., including "California Girls," I’m a Believer," and "These Boots are Made for Walking." 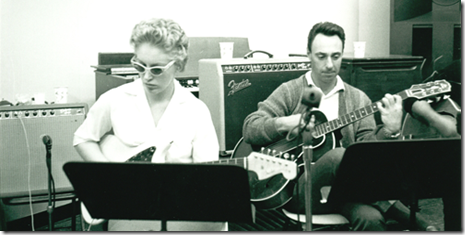 None of these musicians started out in rock. But they were young adults as the new genre materialized in the 1950s, and they found a niche where they could earn a good living while doing what they loved. They were not formally a group, but often found themselves working together from one gig to another. In huge demand, they worked round the clock from one session to another, ignoring their families but raking in cash.

Until it stopped. In the late 60s, rock got serious, and fans wanted to know that the actual band members were playing the music. The gigs didn’t disappear immediately–the Crew also worked on other genres and recorded movie and TV scores–but they gradually leveled off.

Except for Glen Campbell and Leon Russell, who became stars in their own rights.

Clearly, this is a companion piece for 2013’s Twenty Feet from Stardom, concentrating on instrumental musicians instead of singers. But Tedesco can’t quite find the strong narrative line that made the earlier film so exciting. At times, especially in the middle, the discussions of one song after another become repetitive.

Another problem: Since the film is about session musicians, there’s no live performance footage. Studio work lacks the cinematic excitement of live rock and roll.

Aside from the Wrecking Crew veterans themselves, interview subjects include Dick Clark, Cher, Herb Albert, Lou Adler, and Brian Wilson.

One thought on “The Wrecking Crew: The hidden heroes of rock ‘n’ roll (my review)”