Roger Ebert once described cinema as “a machine that generates empathy.” Few films show off that important capability better than the Dardenne brother’s latest achievement, Two Days, One Night. I can’t imagine anyone watching this film without worrying about, rooting for, and identifying with the main character. But the Dardennes also make you care about almost every person you meet in the picture, including those ruining the protagonist’s life.

Right from the start, Sandra (the almost always remarkable Marion Cotillard) discovers that she’s lost her job at a small solar power company. The owner gave the other 16 employees a choice: Either Sandra could keep her job, or everyone else would receive a €1,000 bonus. Overwhelmingly, they chose the bonus. 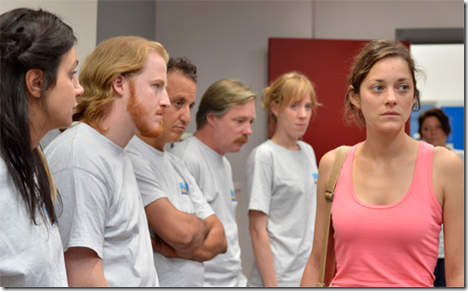 But there’s hope. She and a co-worker complain to their boss, who agrees to allow another vote. Now Sandra has two days to visit each of her co-workers and try to convince them to forfeit a significant chunk of cash to keep her employed.

This couldn’t have come at a worse time. Sandra is recovering from severe depression. She reacts to the setback by trying to withdraw into herself and taking pills. Her patient and loving husband (Fabrizio Rongione) worries that she’s becoming an addict. What’s more, if she loses the job, they lose their home. They have two kids.

Most of the co-workers she visits feel guilty over what they did to her. But that doesn’t necessarily mean that they’ll vote differently this time. Many of them need that extra €1,000 (these are all working-class folk, most with families to support). And Sandra feels like a beggar, going from one home to another hoping they’ll pity her.

The film manages to avoid most of the deadly repetition inherent in the story. Yes, she goes to one person after another, begs them to give up a lot of money so she can remain gainfully employed, and listens to her reasons why they can’t. But each of these co-workers is a unique individual, and they all react to the predicament in different ways. The Dardennes don’t entirely escape the repetition problem (which is why I’m giving it an A– instead of a straight A), but they get very close.

Another problem: There’s also a hospital scene that struck me as very unrealistic.

Despite these minor flaws, Two Days, One Night gives us modern capitalism in a nutshell. Workers, who would naturally be allies, are forced to fight over the limited resources available to pay non-management employees. We all know what that’s like. We’ve all worked at a company that had layoffs, experienced that moment of relief when you discover that your job is safe, and then felt guilty because someone else wasn’t so lucky.

And yet, this picture never feels like a political tract. It feels like a very real situation, where everyone must make a difficult decision that will inevitably result in moral compromise.

Much of the realism comes from the Dardennes’ technique. The picture is shot with a handheld camera, and the only music you hear is music that the characters hear–most of it through a car radio. Even the closing credits come with no sound except street noise.

As I watched Two Days, One Night, I began to wonder how they could satisfactorily end it. If she wins the election, it’s Hollywood. If she loses it, the whole thing would be pointless. If the film ended before the vote is counted, the audience would feel cheated. I won’t tell you how it ends, but I will say that the ending is absolutely perfect.

Despite a couple of flaws, this is an excellent film. If you work for a living, you need to see it.

Error correction: I failed to note that this film, which I saw at a press screening months ago, was opening this week. Had I caught it, I would have posted this review last Wednesday, and mentioned it in this week’s newsletter.

One thought on “Intense Empathy: My review of Two Days, One Night”