The holiday season film festival drought is officially over.

there’s nothing really right about it, either. As played by Akhavan herself, Shirin comes off as a self-centered, alcoholic brat. She mopes. She doesn’t give anyone a straight answer. She goes to bars, drinks heavily, and sleeps around. Then she blows her top when she catches Maxine kissing a man. The other characters seem to exist only for Shirin’s benefit. Allegedly a comedy, it made me chuckle a few times. Read my full review.

A- Selma, Vogue, opens Friday. I found it difficult at first to accept David Oyelowo as Martin Luther King and Tom Wilkinson as LBJ. They didn’t look and sound right. But as the film progressed, I accepted them and got lost in the powerful and 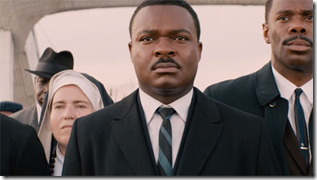 (unfortunately) still timely story. I had no problem accepting Carmen Ejogo’s spot-on perfect performance as Coretta Scott King. The film’s biggest strength comes from its picture of King as a flawed human being filled with doubts, exhaustion, and guilt–a man who would lie to his wife, badly, about his infidelities–but still a great hero. The film’s biggest mistake was letting us meet this real person before showing him as we all know him, as a great orator.

A All About Eve, various CineMark Theaters, Sunday (matinee only) and Wednesday. Here’s your chance to explore

the sordid ambition behind Broadway’s (and by implication, Hollywood’s) glamour. Anne Baxter plays the title character, an apparently sweet and innocent actress whom aging diva Bette Davis takes under her wing. But Eve isn’t anywhere near as innocent as she appears. Fasten your seatbelts; it’s going to be a bumpy ride.

A Babe, New Parkway, Friday through Monday, matinees only. At least among narrative features, Babe is easily the greatest work of

vegetarian propaganda in the history of cinema. It’s also a sweet, funny, and charming fairy tale about a pig who wants to become a sheep dog. This Australian import helped audiences and critics recognize and appreciate character actor James Cromwell, and technically broke considerable ground in the category of live-action talking-animal movies. Warning: If you take your young children to this G-rated movie, you may have trouble getting them to eat bacon.

A+ Alfred Hitchcock double bill: To Catch a Thief & Notorious, Stanford, Friday through Sunday. The A+ goes to Notorious, where a scandal-ridden Ingrid Bergman 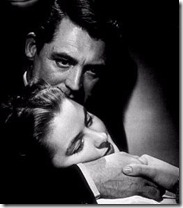 proves her patriotism by seducing, bedding, and marrying Claude Rains’ Nazi industrialist while true love Cary Grant grimly watches. Grant’s secret agent sends her on this deadly and humiliating mission, then reacts with blind jealousy. Sexy, romantic, thought-provoking, and scary enough to shorten your fingernails. I discuss the film more deeply in my Blu-ray Review.  To Catch a Thief, on the other hand, is more like a vacation on the Riviera than the tight and scary thriller from the master of suspense. But it provides a few good scenes. After all, 106 minutes of Cary Grant and Grace Kelly in Monaco,  photographed in the beauty of VistaVision, can’t be all bad. 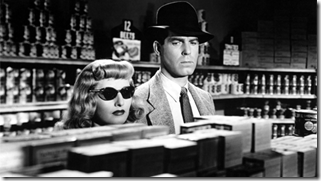 thriller. Not that she has any trouble leading him (this is not the wholesome MacMurray we remember from My Three Sons).  Edward G. Robinson is in fine form as the co-worker and close friend that MacMurray must deceive. A good, gritty thriller about sex (or the code-era equivalent) and betrayal, Double Indemnity can reasonably be called the first true film noir. Too bad the movie, part of the PFA series Ready for His Close-Up: The Films of Billy Wilder, is conflicting with Noir City.

a wallow in classic MGM glamour, and a 93-minute commercial for alcohol as the secret to a happy marriage. Also the start of a very long franchise. William Powell and Myrna Loy make great chemistry as Nick and Nora Charles, the rich, drunk-and-in-love couple with a little murder to clear up. The mystery and the comedy never quite jell, but it’s so fun to watch Powell and Loy together that you really don’t care. The Castro screening–a double bill with the first of many sequels, After the Thin Man–is part of Noir City.

on the nature of film itself, in this story of a projectionist who dreams he’s a great detective.The sequence where he enters the movie screen and finds the scenes changing around him would be impressive if it were made today; for 1924, when the effects had to be done in the camera, it’s mind-boggling. Since it’s Keaton, Sherlock Jr. is also filled with impressive stunts and very funny gags. This is an extremely short “feature,” running only about 45 minutes (depending on the projection speed). As part of the PFA’s ongoing series and class, Film 50: History of Cinema, the presentation will include a lecture by Emily Carpenter and musical accompaniment by Judith Rosenberg.

B+ Alfred Hitchcock double bill: Dial M for Murder & Young and Innocent, Stanford, Thursday through next Sunday.  The B+ goes to

Dial M for Murder. Despite the gimmick of 3D, this adaptation of a Broadway play feels stagy. But it was a good play, and Hitchcock handled it well.  For more on the film, see Rethinking Dial M for Murder. The Stanford will not be screening the movie in 3D. Alfred Hitchcock made Young and Innocent just before The Lady Vanishes, but aside from one great tracking shot, it feels like the new Master of Suspense was just going through the motions.

C+ Suspicion, Castro, Saturday, 1:30. If there ever was an Alfred Hitchcock film ruined by the studio, it was his

third American movie, Suspicion. And the sad part is that it could have been one of his best. Joan Fontaine stars as a young bride who begins to suspect that her new husband, Cary Grant, just may be a serial killer, and that she’s in line to be his next victim. Alas, the powers that be felt that Hitchcock’s original ending was a little too much of a downer, and not sufficiently positive about the sanctuary of marriage. The result is a thriller that falls apart so badly at the end that it negates everything that came before. On a double bill with something called The Bigamist. Part of Noir City.

A- Birdman, Lark, opens Friday. Michael Keaton plays a has-been movie star, who may or may not have superpowers,

hoping to gain artistic respectability by writing, directing, and performing in a Broadway play. Edward Norton plays an actor who already has the respect of critics, but is only fully himself when he’s on stage. Like Hitchcock’s Rope, Birdman pretends it was shot in a single take. But unlike Rope,the gimmick works this time around–better technology, I suppose. Much of the film is hysterically funny, but the picture is just a bit too long, and in the end it doesn’t quite satisfy. From Alejandro González Iñárritu, whose Babel was my favorite film of 2006.

A- Force Majeure, Lark, Thursday, 2:00. The carefully controlled, not-quite-natural outdoor experience of a fancy ski resort becomes a metaphor for the veneerof a troubled marriage in this

Swedish drama set in the French alps. When an avalanche threatens his family, Tomas fails to protect them as he should. Soon his wife loses all respect for her husband, and Tomas loses all respect for himself. All this is set within a resort that appears to be just a bit more realistic than Disneyland.  Force Majeure studies courage and fear, and the destructive behavior that can destroy a marriage. But it’s also about the artificial worlds we create for our own enjoyment. See my full review.

A Boyhood, Rafael, Opera Plaza, limited run starts Friday. The best new film I saw in 2014. Fifty years from now, people will still watch Richard Linklater’s intimate epic. Shot off and on over a period of 12 years, Boyhood 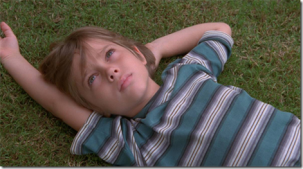 allows us to watch young Mason and his family grow up and older. It isn’t an easy childhood. His parents are divorced, neither of them has much money, Dad is immature and Mom has bad taste in men. But Boyhood avoids the sort of horrible situations that drive most narrative films, and it’s all the better for it. By using the same actors over such a long period of time, Linklater creates a far more realistic picture than could be done with aging makeup or switching from a child actor to an adult one. Read my full review.