The 1971 comedy Harold and Maude fit the late hippy era as perfectly as Pink Floyd and the munchies. At a time when young Americans were embracing non-conformity, free love, ecstatic joy, and 40-year-old Marx Brothers movies, this counterculture romance between an alienated and death-obsessed young man and an almost 80-year-old woman made total sense. The broad and outrageous humor helped considerably. 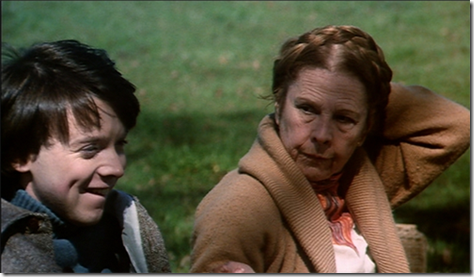 I revisited the movie Friday night on Blu-ray. I can’t say I love it as much as I used to, but it’s still touching and very funny. And its message is still a good one. But the ending bothers me considerably more now that I’m much closer to Maude’s age than Harold’s. I give it an A-.

I first saw Harold and Maude a year or so after its original release, and fell in love with it immediately. I saw it countless times in revival movie theaters over the next decade. In the last 30 years, I’ve seen it only twice. The first time was on Laserdisc in 1996 or ’97, when I showed it to my son–who was really not ready for it. The second time was last Friday night.

As the story begins, Harold (Bud Cort) lives in a huge mansion with his very proper and aristocratic mother (a very funny Vivian Pickles). He appears to be about 20, with no responsibilities; he doesn’t work or go to school. But he has hobbies. He drives a hearse. He attends funerals. And he tortures his mother by staging fake suicides. Many of the movie’s biggest laughs come from Pickle’s mildly annoyed reactions to his ghastly fake deaths; she’s clearly used to them.

Then he meets Maude (Ruth Gordon), another fan of funerals. She’s almost 80. She loves life–her own and others. While Harold is quiet and introverted, she’s loud and open to anything. She talks about her past political activism. She jokes, flirts, dabbles in the arts, and steals cars so that people won’t get too attached to material objects.

And of course she’s exactly what Harold needs. She opens him up and allows him to see that there is more to life than death. Within the space of a few days, they become close friends, then lovers.

The story could easily become sappy, but writer Colin Higgins and director Hal Ashby avoid the trap with broad and effective humor. Harold’s shrink, priest, and war-monger uncle are almost as funny as his mother (the priest has a short but pricelessly hilarious monolog near the end). Two encounters with a frustrated cop bring additional laughs. And a running gag where Harold continually sabotages his mother’s attempts at finding him a bride are priceless.

Even watching it alone–not the best way to see any comedy–I was laughing out loud much of the time.

But there are dark sides to the story, and not just in the funeral and suicide gags. Maude lets on briefly that her life has included some serious suffering. And one shot, so short you might miss it, tells you just how horrible her past had been.

Ashby handles the sexual part of their relationship carefully. There’s only one chaste kiss. The only time you see them in bed, they’re on opposite sides and not touching. The film is rated PG.

I can’t discuss Harold and Maude without mentioning the songs by the artist formerly known as Cat Stevens. At his artistic height, he was a brilliant singer and songwriter (if a bit didactic), and his songs fit this film perfectly, both musically and thematically. It seems impossible that the man who wrote “If You Want to Sing Out, Sing Out” would become a fundamentalist who would embrace the call to murder a novelist. But we have to face the fact that it happened.

Now I would like to discuss the ending. So if you haven’t seen it, and don’t want your first screening spoiled, you should stop reading this now.

Okay. Is everyone here ready to read about the ending?

Maude commits suicide on her 80th birthday, just before Harold was to propose. It’s not entirely a surprise. Some casual comments she makes beforehand suggest her plan. “I’ll be eighty next week. A good time to move on, don’t you think?”

Now, if she was decrepit, miserable, and facing a horrible and fatal illness, I could understand her action. But she’s a very young 80, living life to the fullest. She’s just acquired a lover a quarter of her age. She has a lot to live for.

The filmmakers could have found a better ending. She might have rejected Harold’s marriage proposal, and sent him on his way, explaining that she doesn’t want to be tied down. She could be facing a horrible and fatal illness, and wanted to go before the symptoms took over her life.

Either of those could still have motivated Harold to do what he does in the movie’s wonderful last few seconds, when he drives his car over a cliff, then walks away strumming a banjo.