Only one festival, Another Hole in the Head, runs this week. It closes Monday.

A- Birdman, Balboa, opens Friday. Michael Keaton plays a has-been movie star, who may or may not have superpowers,

hoping to gain artistic respectability by writing, directing, and performing in a Broadway play. Edward Norton plays an actor who already has the respect of critics, but is only fully himself when he’s on stage. Like Hitchcock’s Rope, Birdman pretends it was shot in a single take. But unlike Rope, the gimmick works this time around–better technology, I suppose. Much of the film is hysterically funny, but the picture is just a bit too long, and in the end it doesn’t quite satisfy. From Alejandro González Iñárritu, whose Babel was my favorite film of 2006. 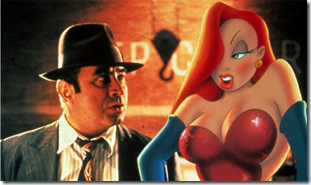 side by side in late 1940’s Hollywood. I remember it being funny, outrageous, and delightful for anyone who loves old cartoons. The special effects were cutting edge for their day, but still based on pencil, ink, and an optical printer. Today, of course, they’d be digital, and would lose a lot of their old-time charm. On a double bill with Ed Wood, which I also haven’t seen in a long time but didn’t care for when I saw it.

they think he’s stupid. They’re wrong. The second and best film in Frank Capra’s common-man trilogy, Mr. Smith creeks a bit with patriotic corniness, and seems almost as naive as its protagonist. But it has moments–Stewart’s speech about how “history is too important to be left in school books,” for instance–that can still bring a lump to the throat of any leftwing American patriot. Besides, it’s just plain entertaining.

B Fantastic Mr. Fox, Castro, Sunday, 1:00. There’s a cartoon-like quality to a lot of Wes Anderson’s work, so it isn’t surprising that

he would eventually make a real cartoon. Based on a story by Roald Dahl, Fantastic follows the adventures of a very sophisticated but not altogether competent fox (voiced by George Clooney) as he tries to outwit a farmer and keep his marriage together. Children and adults will find different reasons to enjoy this frantically-paced comic adventure.

A Nosferatu, New People Cinema, Saturday, 9:00. You best forget about sexy vampires before you go see the first  film version of Dracula (an unauthorized version that got the filmmakers sued by Bram Stoker’s

widow). Max Schreck plays Count Orlok (the name change didn’t fool the court) as a reptilian predator in vaguely human form. This isn’t the scariest monster movie ever made, but it’s probably the creepiest. Not to be confused with Werner Herzog’s 1979 remake. With live musical accompaniment by DJ Tasho Nicolopulos, using only horror movie soundtrack vinyl records. Part of Another Hole in the Head.

A Blade Runner – The Final Cut, Castro, Monday and Tuesday. Based on Philip K. Dick’s 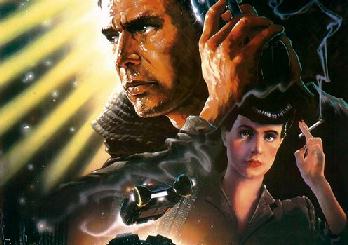 novel Do Androids Dream of Electric Sheep, Blade Runner remains surprisingly thoughtful for ’80’s sci-fi–especially of the big budget variety. It ponders questions about the nature of humanity and our ability to objectify people when it suits our needs. Yet it never preaches. The script’s hazy at times; I never did figure out some of the connections, and a couple of important things happen at ridiculously convenient times. But art direction and music alone would make it a masterpiece. I’m assuming this is the same final cut I saw in 2008, and not a more final cut made since.

A- Force Majeure, Lark, opens Friday. The carefully controlled, not-quite-natural outdoor experience of a fancy ski resort becomes a metaphor for the veneer

of a troubled marriage in this Swedish drama set in the French alps. When an avalanche threatens his family, Tomas fails to protect them as he should. Soon his wife loses all respect for her husband, and Tomas losses all respect for himself. All this is set within a resort that appears to be just a bit more realistic than Disneyland.  Force Majeure studies courage and fear, and the destructive behavior that can destroy a marriage. But it’s also about the artificial worlds we create for our own enjoyment. See my full review.

Found Footage Festival, Roxie, Friday, 9:30. The world is full of unwanted VHS cassettes, which is a good thing for

Nick Prueher and Joe Pickett. They mine comic gold from the unwanted dregs of the video universe. I haven’t seen their seventh installment, but it promises to include “A new exercise video montage featuring a Christmas-themed workout, a martial arts fitness regimen called ‘Tiger Moves,’ and a tape called ‘Butt Camp’.” Read my report on their sixth installment. .