In festival news, New Filipino Cinema closes Sunday, while DocFest continues through the rest of this week. And just as that one closes, Frameline opens Thursday night.

B+ Interview with the Vampire, Castro, Friday, 7:20. Writer Anne Rice and director Neil Jordan create a vampire epic stretching across three centuries. And a very dark 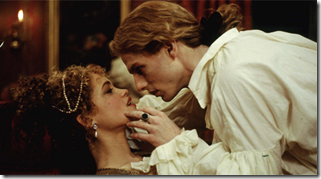 yet sexy three centuries it is. Tom Cruise gets top billing as the immortal sociopath Lestat, but a not-yet-famous Brian Pitt is the real star, playing the tormented vampire being interviewed. Between them and Antonio Banderas, you call this Great-Looling Guys With an Eating Distorder. A 12-year-old Kirsten Dunst expertly plays a grown woman in a little girl’s body. On a Midnites for Maniacs double bill with Vampire’s Kiss, which I’ve never seen.

B L’avventura, Pacific Film Archive, Friday, 7:30. Michelangelo Antonioni’s story of the young and amoral hardly counts as an adventure–although it almost starts as one. 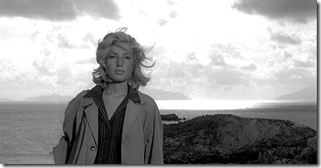 A group of wealthy young adults yacht to a deserted island, where one of them mysteriously disappears. The others look for her, then give up and go about their regular business. I hated L’avventura when I saw it in college. When I saw it again recently, I realized the point of how it played with my expectations. This is not about rescuing a friend or lover; but about the shallowness of modern relationships. New, restored 35mm print.

A+ The Grapes Of Wrath, Pacific Film Archive, Wednesday, 7:00. No one associates serious social criticism with classic, studio-era  Hollywood. Yet this 20th Century-Fox production of John 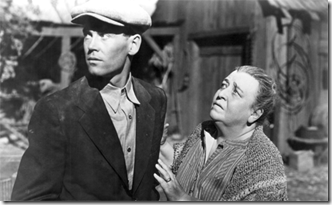 Steinbeck’s flip side of the California dream pulls few punches. As the desperately-poor Joad family moves from Oklahoma to California in their rickety truck, only to find poverty, bigotry, and exploitation, the picture shows us an America where mere survival is a victory and revolution a logical reaction. John Ford directed from producer Nunnally Johnson’s screenplay, but a lot of credit must go to studio head Darryl Zanuck for the courage to make a film that exposes the ugly underbelly of American capitalism.

A+ Casablanca,Lark, Thursday, 6:00. What can I say? You’ve either already 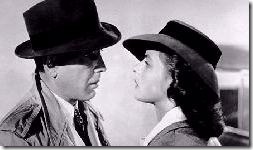 seen the best film to come out of the classic Hollywood studio system, or you know you should. Let me just add that no one who worked on Casablanca thought they were making a masterpiece; it was just another sausage coming off the Warner assembly line. But somehow, just this once, everything came together perfectly. For more details, see Casablanca: The Accidental Masterpiece. 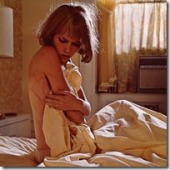 C Rosemary’s Baby, Castro, Wednesday. Roman Polanski’s first American film only half-way works. Mia Farrow looks fidgety and nervous as a pregnant wife who slowly begins to suspect that she’s carrying the devil’s spawn, and that her husband, and everyone she thought she could trust, is in on the conspiracy. Yes, it’s an effectively creepy story. But’s it’s also slow enough to let you see what’s coming a mile off. Rosemary’s Baby never quite builds the sense of dread that the material, and the director, were capable of bringing to it. 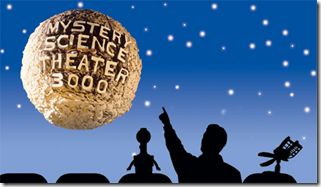