I attended opening night, and managed to get to one movie Friday night, but Saturday was my first full day at this year’s San Francisco International Film Festival.

Oddly,  I didn’t see a single feature-length film that day.

But here’s what I did see:

Dolby Labs: The Sound of Movies

In this Master Class at the New People Cinema, Angus McGilpin and John Loose of Dolby Labs discussed the history of sound in movies, then walked us through an audio mix.

They started off talking about the primal importance of sound to the human experience. "It’s fundamental to how we experience the world. We hear sounds before we understand them."

They then screened Silent. a very short cartoon made by Monbot Studios for Dolby. I’d seen it before on Youtube, but it was much better on the big screen. Starring an animated Buster Keaton and clearly inspired by Sherlock Jr., it celebrates cinema’s technical evolution. It’s a fun two and half minutes.

After the movie, they walked us through the creation of the film’s audio, allowing us to hear how different types of effects, plus music, layer into each other.

The presentation ended with a brief Q&A. One audience member asked how much dialog these days is recorded after the film is shot. Loose guessed about 60%, which is more than I expected.

Agnès Varda: From Here to There

Only last year did I really discover, and fall in love with, the work of Agnès Varda. I’ve discussed her early work here and there. So I was very willing to devote most of the afternoon to her 2011 documentary miniseries, Agnès Varda: From Here to There.

The concept is simple: Varda travels the world, visiting old friends and making new ones. But this is more than a 225-minute home movie. The friends she visits include renowned and unknown (but still talented) painters, sculptors, and filmmakers. She uses her considerable photographic skills (like Kubrick, she was a photographer before she became a filmmaker) to show us amazing paintings, statues, and works of kinetic art in the best light. She films 102-year-old auteur Manoel de Oliveira doing a jaunty Chaplin imitation, and reconnects with fishermen she turned into actors almost 60 years ago in her first film, La Pointe Courte. She re-examines a photo of strangers she took at the beach long ago, and directs a little movie about what they might be doing.

And all the while, her upbeat, impish curiosity and joy at life itself shine through. At one point, a journalist comes to interview Varda. Soon, she’s the one being interviewed.

I enjoyed the experience quite a bit, but I suspect I would have enjoyed it even more as it was meant to be seen: On television, in five 45-minute episodes. In one sitting with a single, five-minute intermission, it was grueling.

If you have the time and stamina, Agnès Varda: From Here to There will play again on Monday, April 28 at the New People Cinema (which is where I saw it) at 12:30. Then it will move across the Bay and screen at the Pacific Film Archive Sunday, May 4 at 1:30.

I closed the evening with a collection of short subjects. It contained two documentaries, two comedies, one drama, and a dance film.

This was my first time in the Kabuki since last year’s festival. Guest what! Auditoriums 3 and 4 are now adults only–no matter what’s showing. They sell alcohol in that part of the multiplex.

My favorite short was the comedy "So You’ve Grown Attached," by Kate Tsang. It looks at the plight of a young girl’s imaginary friend, who’s terrified that she will outgrow him. Luckily, he gets emotional support from his understand (and very fuzzy) boss in the imaginary friend organization. Very touching and funny. 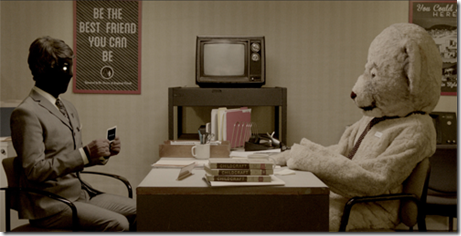 I also enjoyed the beautiful "Barn Dance" and the other comedy, "Angels," which is very much a celebration of San Francisco. I found the documentary "Santa Cruz del Islote" fascinating as it explored a tiny and very-much inhabited island 50 miles off the coast of Colombia. I thought I was going to hate the one drama on the program, "The Birds’ Blessing," because I could see the ending a mile away. Fortunately, it didn’t end the way I expected.

In fact, the only short I didn’t like was the other documentary, "Re:Awakenings," about a medical breakthrough in the late 1960s and early 1970s. It did little more than make you look at severely-disabled anonymous people.

After the pictures, several of the filmmakers came up for Q&A. Someone asked Tsang how she came up with the idea for "So You’ve Grown Attached." "It was autobiographical. I was aware that my friends had imaginary friends and I wanted one of my own."