Within the space of 48 hours, I attended the last three screenings at the Pacific Film Archive‘s series The Resolution Starts Now: 4K Restorations from Sony Pictures.

With these screenings, there was no Grover Crisp to discuss the technology and how it effects the art. Aside from very brief introductions from the PFA’s Steve Seid, they just showed movies.

I had never before seen Brian De Palma’s 1976 ode to Alfred Hitchcock. And while I kind of, sort of enjoyed the movie, I can’t say that not having seen it before was a great loss. Cliff Robertson plays a wealthy real estate developer who loses his wife and daughter through a kidnapping and an astonishingly stupid bit of police work. Then, 16 years later, he meets a woman who looks exactly like his wife (both played by Geneviève Bujold) and before you can say Vertigo, you have a pretty good idea that things aren’t what they seem. Just some advice: If your best friend is played by John Lithgow and has a thick southern accent, don’t trust him.

Actually, the worst thing about this movie was the way over-the-top musical score. That’s really sad, because it was Bernard Hermann’s last score. I don’t know whether Hermann was played out (his penultimate score, Taxi Driver, is brilliant), or whether the problem was in the mix (which I believe was done after Hermann’s death). If the music hadn’t been so loud, it probably would have been less annoying.

Which brings up another issue about the digital restoration. Like most films of its time, Obsession was originally released in mono (that would change in a couple of years), but the soundtrack was recorded in stereo. Sony gave it what I suspect was a 5.1 mix, although I didn’t notice any surrounds. The music was definitely in stereo, and that may have added to the overwhelming, melodramatic, pompous effect of that score.

I do wish that the studios would respect original, mono scores more.

But the picture looked great, even if it was only a 2K restoration. It was photographed by Vilmos Zsigmond, who was to 1970s Panavision what Jack Cardiff was to 1940s Technicolor. Among the titles he shot through Panavision’s anamorphic lenses: McCabe and Mrs. Miller, Scarecrow, Sugarland Express, and Heaven’s Gate. I don’t know how Zsigmond feels about this restoration, but he should be proud of it.

Dr. Strangelove or: How I Learned to Stop Worrying and Love the Bomb

I don’t remember when I last saw Stanley Kubrick’s nightmare comedy in a theater. It’s been at least 30 years. (I rented the Blu-ray about a year ago.) For a movie so relentlessly tied to the cold war concerns of the 1960s, it hasn’t lost its sting. Even the paranoid speech about fluoridated water got the intended laughs, despite an audience that largely didn’t remember the right-wing ravings on that subject.

Peter Seller’s telephone monolog, talking to an unseen and unheard Soviet Premier, is one of cinema’s great comedy sequences. Kudos to writer Terry Southern for writing the brilliantly believable yet hilarious dialog (I suspect it was part of Southern’s contribution to the script), and to Sellers for his perfect delivery. 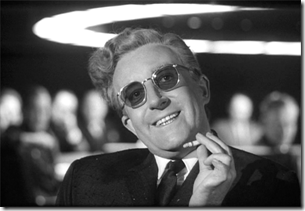 The scenes in the airplane are played very much like a conventional comic thriller. This tricks the audience into rooting for these determined American heroes, even when we know that they’re about to destroy the world.

The 4K DCP looked great, catching the full grayscale of Gilbert Taylor’s black and white photography. The film’s grain structure is thoroughly in evidence, and gets thicker in the 16mm battle scenes.

Fortunately, this time around, Sony respected the original mono mix.

In his introduction, Steve Seid explained why Picnic (which I didn’t get to last week) was only in 2K. It was scanned and restored strictly for a Blu-ray release. Sony created the DCP specifically for this series. This shows how easy it is, once a film is properly digitized, to make it available theatrically.

Makes me wonder why I ever had to sit through a theatrical Blu-ray presentation.

Now, onto the main attraction.

Before Sunday, I hadn’t seen On the Waterfront in a very long time. And frankly, it wasn’t as good as I remembered it.

Yes, the acting is phenomenal, and not just with Brando. The picture works as a showcase for all the great method actors moving from New York to Hollywood in the early 50s.

But they didn’t have to leave New York for this one. The location work joyfully thumbs its nose at every backlot New York St. set and rear-projection stage in Southern California. Here, the actors talk in the real location.

The big problem, of course, is the historical context. Both writer Budd Schulberg and director Elia Kazan were ex-Communists who saved their careers by naming names and thus destroying other people’s  careers during the time of the blacklist. In other words, they became stool pigeons in an act of cowardice. Then they made a movie about how courageous and upright it is to be a stool pigeon.

But the film has other problems. If you haven’t seen the film and are adverse to spoilers, skip the next paragraph.

Brando’s character eventually realizes that he must testify against the evil, corrupt union officials. But that means testifying against his own brother. It’s family loyalty vs. loyalty to society as a whole. Then, rather conveniently, the other bad guys murder his brother. No more moral dilemma. Convenient.

Okay. Those avoiding the spoiler can read from here down.

The 4K restoration looked fantastic. The black and white movie looks very grainy, but it always has. The audio didn’t try to be more than a 1954 mono soundtrack.

Made during Hollywood’s widescreen revolution, On the Waterfront was shot to look good at 1.33×1, 1.85×1, and anything in between. The DCP uses 1.66×1, and I think that was the best choice. On the Criterion Blu-ray, which I haven’t seen, it’s available in all three ratios. Here’s an explanation.

By the way, Sunday was the PFA’s last day of screening before closing for its winter break. They’ll start showing movies there again on January 16. Upcoming series include one on Godard, and a mammoth series on American comedy.