This was an exceptionally exhausting day at the festival. I saw five programs, and lacked the stamina for a sixth.

Windsor McCay, His Life and Art

Animation historian John Canemaker narrated this entertaining lecture/film presentation on the work of the brilliant cartoonist, vaudeville performer, and animation pioneer Windsor McCay. The presentation covered his ground-breaking comic strips Dreams of a Rarebit Fiend and Little Nemo in Slumberland, but the main pleasures came, not surprisingly, from his animated work.

Canemaker showed four of his films, each amazing in its own unique way, and each a major stride forward from the previous short. His “Dreams of a Rarebit Fiend” cartoon, involving a very determined mosquito and his hapless human victim, left the audience laughing while gasping in horror. 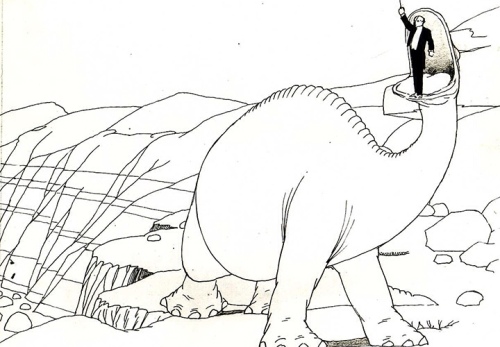 Canemaker presented McCay's most famous animated work, “Gertie the Dinosaur,” the way it was intended to be seen, with Canemaker taking McCay's part of the live, on-stage but off-screen narrator (originally performed by McCay), and encouraging audience participation (“Come out, Gertie! Don't be shy!”). Gertie, probably the first animated dinosaur, has the personality of an eager, semi-trained, and mischievous puppy.

The final cartoon, “The Sinking of the Lusitania” was brilliant pro-war propaganda. It was mournful and horrific in its recreation of the atrocity that led the USA into World War I. Of course it ignored the British and French atrocities that led to the German one, but that's what makes it propaganda. The sense of disaster and loss-of-life was haunting.

Stephen Horne, who's becoming the Festival's default musician, did wonderful accompaniment on all four shorts–funny for the mosquito, but haunting for the sinking ship.

I've already told you, in Friday's post, about the restoration of this 1916 Douglas Fairbanks adventure, made four years before he found his place in cinema with the swashbuckler. The movie was fun, short, and sweet, but I'd like to concentrate here are the social and racial issues.

This feature, indirectly supervised by D.W. Griffith only a year after Birth of a Nation, takes a very strong, critical view of the concept of white supremacy. (It was directed by Alan Dwan.) Fairbanks plays a man between races–with a white father and a Native American mother–neither of whom he ever knew. He's noble, decent, and constantly at odds with the cruel, bigoted, or hypocritical white people. The intertitles frequently refer to the “superior” white race in a tone of deep sarcasm.

You can only expect so much from a commercial American film from 1916. The hero does not get to happily marry, and some “Indian” behavior appears to be genetic. The native Americans are stereotypes too, of course, and it's worth remembering that Griffith's extreme racism pointed primarily to the race of his father's former slaves.

Günter Buchwald accompanied the film on the Castro's Mighty Wurlitzer organ and on violin. Now I understand his reputation. He pulled emotional stops out of the story that I don't think were there, adding new depth.

Legong, Dance of the Virgins

The ethnographic films of the silent and early talkie eras, such as Nanook of the North and Chang, have their own special appeal, giving us a reasonably accurate view of lost worlds, even if coated with narative gloss. Legong, set and shot in Bali in 1935, was one of the last and most fascinating of these movies.

The story is simple and shallow. A young temple dancer sets her eyes on a handsome drummer. He's nice to her, but he falls in love with her sister. At least in this version of Bali society, unrequited love pretty much ruins a young woman's life.

This was a daring film in 1935. The people wear accurate Bali clothes, which mean a lot of bare female breasts. When it was restored in 1996, the main issue was recovering footage cut by censors. Frankly, I can't imagine a cut of this film that would have been acceptable in America at that time.

But breasts are no more part of the film's main attraction than its silly story. Legong records, in what I assume are reasonably accurate images, a way of life from long ago. We see occasional hints at the modern world–pipes feeding water into a stream, two young boys fighting over cigarettes–but we mostly see a different world inhabited by people little touched by our global civilization. And we see them in color.

Two musical groups, Gamela Sekar Jaya and the Clubfoot Orchestra, joined forces to accompany the film. I think there may have been 15 musicians playing, most of them on the stage and blocking the lower-left corner of the screen. But the sound they provided, much from human voices and from instruments I cannot name, carried us away to Bali. This was easily the best accompaniment at the Festival so far.

This French comedy of manners, directed by Jacques Feyder, plays the Great Expectations plot to modest comic effect. A working-class boy living with his widowed mother does a good deed, then is adopted to be prepared for a life of wealth. He can't adjust to the more restrictive, more formal, less fun life of the upperclass. The kid was likable, and there were some laughs, but nothing exceptional. Easily the weakest film of the festival so far.

On the other hand, the print was beautifully tinted and toned. And the Monte Alto Motion Picture Orchestra was as wonderful as usual.

The House on Trubnaya Square

It's hard to imagine people laughing under Stalin. On the other hand, Stalin had not yet consolidated his power when Boris Barnet made this charming, bizarre, and funny comedy.

A peasant woman comes to Moscow to work as a maid (I didn't know there was such a job in the “classless” society), and ends up almost a slave of a lazy and exploitative hairdresser. Director Barnet plays with the medium like few others, using stop-motion animation, freeze-frames, and sudden flashbacks to get laughs.

And he gets them. Even an old cliche like the country bumpkin who doesn't understand the difference between theater and reality got a big laugh thanks to Barnet's outrageous technique.

One wonders how something so subversive–the apartment building in the title is anything but a workers' paradise–could have been made in the USSR. But, of course, the party and the government saves the day and brings about the whimsical happy ending.

One continuity problem: We never find out what happens to the heroine's pet duck.

Stephen Horne gave another wonderful piece of accompaniment. This time, I believe, he added a drum set to his musical collection.

As much as I wanted to see The Joyless Street, I just didn't have the time or energy for another film. Too bad. It looked like a good one.