I’ve been throwing myself into the life and work of Samuel Fuller lately. It’s been a rewarding experience.

For those not familiar with the name, Fuller wrote and directed a string of low-budget, impressive genre films from the late 40’s to the early 60’s. His pictures are bold, direct, and in-your-face, and utterly lacking in subtlety. Yet they’re also marked with a strong, open-minded humanism, a hatred of violence (even though his films are often quite violent), and sympathy for minorities, the poor, and others on society’s margins.

After 1964, he found it difficult to raise money for new projects. He only directed a handful of films in the 33 years before his 1997 death. 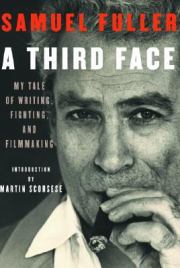 My own recent plunge into Fuller’s world started when I picked up a used copy of his autobiography, A Third Face, at Berkeley’s Pegasus Books. I’m generally suspicious about autobiographies–the authors are seldom objective–but I couldn’t resist this one. After all, Fuller was one hell of a writer. Starting out as a reporter at 17, he wrote several novels as well as all those screenplays (far more than he directed). The book has its share of obvious errors (Paulette Goddard was not in Monsieur Verdoux), and issues suspiciously skipped over. Although he goes into great detail about many wonderful mentors and friends (all of whom he treats generously), he avoids discussing any romantic relationships except for his late-in-life and very happy second marriage.

Accurate or not, A Third Face is a great read. Fuller’s blunt, direct prose paint a self-portrait of the artist as a humanist rebel. He fights with producers and studio heads to make the pictures he wants to make, telling the stories he wants to tell. He even stands up to J. Edgar Hoover.

And it’s not all about movies. He goes into detail about the newspaper business in the 20s and 30s, and his experiences in the infantry during World War II (recreated and fictionalized in his 1980 film The Big Red One). His account of the vividly recreates the sense of going months and years expecting instant death at any moment. You can see why his war movies (all of which could reasonably be described as anti-war movies) carry such a strong wallop.

As I started reading the book, I decided to catch up on some of his films. I had seen enough already to know and like his work, but this gave me an excuse to dive in to more of them. (Among the films I’d already seen were The Big Red One, I Shot Jessie James, The Naked Kiss, and The Crimson Kimono.)

As luck would have it, two of Fuller’s major works, neither of  which I’d seen before, played the Pacific Film Archive as I was reading the book. The first was his first war film, The Steel Helmet. Set during the then contemporary Korean War, it follows a gruff sergeant trapped behind enemy lines. The sole survivor of his platoon, he eventually finds and joins another group of soldiers, heading on an extremely dangerous mission. This instantly became my all-time favorite Fuller film.

But it lost that status a week later, when I returned to the PFA for Pickup on South

Street. Not only did this tale of a pickpocket and Communist spies supplant Steel Helmet as my favorite Fuller, it also leaped into my top tier of great film noir. To see what I’m talking about, read Anti-Commie Friday Night at the Pacific Film Archive.

I also managed to see four other Fuller films, all new to me, at home during this period. None of them matched the quality of Steal Helmet or Pickup, but I liked White Dog quite a bit, as well as parts of the western Forty Guns. I didn’t care much for Shock Corridor or Park Row. Shock Corridor went overboard with its B picture in-your-face shocks. Park Row suffered from Fuller’s other artistic flaw: It preached too much.

As it happens, I saw two other Fuller features theatrically this year–House of Bamboo and Underworld USA. That was way back in January, at a Noir City double bill. For more on these, see Noir City Report: 2 by Sam Fuller.

That means I saw four Sam Fuller films theatrically in 2012. Considering that no one did a retrospective of his work this year, that’s pretty good. Or pretty lucky.

I don’t give a damn if it sounds like some corny ending to a B movie. Everybody’s got troubles, setbacks, frustrations, tragedies. Love gets us through them. Love inspires generosity, patience, and compassion. Love keeps us healthy and whole. If I’ve learned anything at all from writing all those stories, from fighting a world war, from making all those films, from being way up and being way down, I’ve learned that everything–everything!–can be expressed in just four god-blessed words: Love is the answer.

Okay, now all you new voices, let yourselves be heard!