A- Bonsái, SF Film Society Cinema, opens Friday for one-week run. Right at the start, a narrator tells us that Emilia will die before the end of the film, but that Julio will live. Cutting back and forth between two timeframes,

placed eight years apart, writer/director Cristián Jiménez presents two romances in the life of one young man. In the first, the ill-fated Emilia meets Julio in college. They read to each other in bed, discuss great literature (mostly Proust), go to punk-rock concerts, and enjoy each other’s bodies with the hot single-mindedness of youth. In the later romance, Julio tells his lover Emilia that he’s helping an established author write a new novel. But to keep up the hoax, the young man must become a novelist himself. Jiménez uses a deadpan, matter-of-fact approach of early Jim Jarmusch, to very good effect. Read my full review.

B Farewell, My Queen, Embarcadero, opens Friday. What was Versailles like in the final days of the French monarchy? Was the court panicked? In

denial? Did anyone realize that they would soon lose their heads? Benoît Jacquot creates an answer to these questions in this small yet visually impressive drama set in the French court in July of 1789. Although seriously marred by an uninteresting central character, Farewell, My Queen gives us a peak into a different world–a beautiful palace in which the realities of normal people seldom intrude. But it is utterly dependent on a bigger world that it thinks it controls, and it can’t last forever. I wish this picture had run longer. Read my full review. 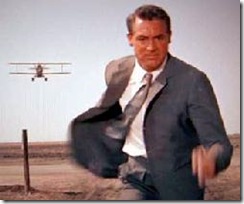 light masterpiece, not as thoughtful as Rear Window or Notorious, but more entertaining than both of them combined. Cary Grant plays an unusually suave and witty everyman in trouble with evil foreign spies (who think he’s a crack American agent), and by the police (who think he’s a murderer). And so he must escape almost certain death again and again while chased from New York to Mount Rushmore. On the bright side , he gets to spend some quality time with a very glamorous Eva Marie Saint (danger has its rewards).

A The Leopard, Pacific Film Archive, Friday, 7:00. For a three-hour film where almost nothing happens, Luchino Visconti’s 1963 epic is remarkably spell-binding. The sumptuous Technirama photography helps. Aristocrats led by patriarch Burt Lancaster live through a

revolution that changes Italy’s government, but leaves their lives hardly effected. Visconti was an aristocrat by birth but a Marxist by inclination, and his film shows considerable nostalgia for the days of fancy balls and peasants who knew their place, but also understands why this type of life had to go away. The Leopard is a big, bold film about people barely touched by momentous events. It’s graceful in design and shows great sympathy for its flawed characters. I enjoyed it immensely. Part of the series Bellissima: Leading Ladies of the Italian Screen. Read my longer report.

A- Live Theater on the Big Screen: Frankenstein, Cerrito, Monday and Wednesday. Finally, something directed by Danny Boyle that I actually liked! Playwright Nick Dear starts his adaptation with the monster’s lonely birth, putting the focus on the creature. This poor child-man’s journey, and his inevitable clash with his arrogant creator, make up the heart of the play. A lot of philosophy and religion get discussed, but it never feels forced. In some screenings, Jonny Lee Miller plays the monster and Benedict Cumberbatch plays Frankenstein. In others, they switch roles (I saw it with Cumberbatch as the monster). For more on this, see Live Theater on the Big Screen and Frankenstein.

pleaser. Based on a true story, it follows the thorny but eventually healing friendship between a wealthy paraplegic and the African immigrant hired as his caregiver. Of course it’s a box office bonanza–the movie is funny, heartwarming, and celebrates life, it stars two men of exceptional talent and charisma, and it’s as carefully designed as a well-made clock. But it’s also just as predictable. Read my full review.

D Vertigo, UA Berkeley, Thursday. What? I’m not recommending Vertigo?  Everyone else thinks it’s a masterpiece, but it tops my short list of the Most Overrated Films of All Time.Vertigo isn’t like any other Alfred Hitchcock movie; it’s slow, uninvolving, and self-consciously arty.

after her last film, cinephiles still debate whether Louise Brooks was a first-class talent or just a beautiful woman in the hands of a great director. Either way, her oddly innocent femme fatale wins our sympathy and our lust as she sends men to their destruction without, apparently, understanding what she’s doing. A great example of what the silent drama could do in the hands of a master; in this case, G.W. Pabst. Accompanied by the Matti Bye Ensemble.

B+ Mantrap, Castro, Friday, 7:00. Here’s your chance to discover why Clara Bow was such a huge star in the 1920’s. Sexy, funny, and bubbling with energy, she plays

a big-city manicurist who on a whim marries a man from the Canadian wilderness. Her new  husband is played by Ernest Torrence—definitely several notches below her on the physical attraction scale. Needless to say, she flirts with everything in pants. The title has a double meaning–it’s also the name of the very small town where most of the movie is set. One of the best romantic comedies to come out of the silent era, and a terrific date movie. Stephen Horne will accompany the movie on piano, which makes me both happy and disappointed. Happy, because he’s a very good accompanist, but disappointed because his score is already on the DVD. I would rather have heard something new.

B The Mark of Zorro (1920 version), Castro, Sunday, 10:00AM. This 1920 adventure flick is where it all began. Douglas Fairbanks bought the rights to a then-new serialized novel, projected his already-famous athletic comic hero into a romanticized past, grabbed a sword, and invented the movie swashbuckler. There are better swashbucklers, better Zorro movies, and better Fairbanks vehicles (the sequel, Don Q, Son of Zorro, is all three), but no other catches the birth of a genre. Accompanied by Dennis James on the Mighty Wurlitzer.

South, Castro, Saturday, 5:00. Nanook of the North was not the first feature-length documentary. This record of the Ernest Shackleton’s

famous failed expedition beat Robert Flaherty’s northern epic by three years. I saw it long ago at the UC Theatre, and remember being underwhelmed by the constant barrage of cute animal pictures. Director Frank Hurley shows us all of the expedition’s cute dogs, and skips over the fact that the men eventually had to eat them. However, this version, with live narration by Paul McGann and music by Stephen Horne, may be considerably more entertaining and enlightening.

The Cameraman, Castro, Sunday, 7:30. The festival ends with a movie that caught Buster Keaton in transition. The Cameraman was his penultimate silent, his first film without near-total artistic control, and his last really good one. It’s been too long since I’ve seen it for me to give it a grade, but I remember liking it. But I didn’t love it to the degree I love so much of his previous work.