Love brings sacrifice, long-lasting guilt, and only temporary happiness in Sarah Polley's exceptional love triangle drama, Take This Waltz. Loving your spouse won't stop you from falling madly in love with someone else, and no matter what you do with those feelings, someone will get hurt. There are no simple answers. 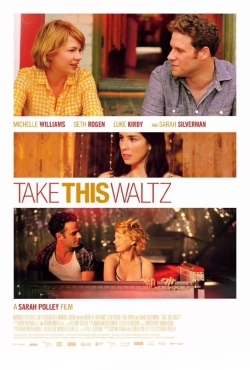 My wife and I saw this moving picture this evening.

Michelle Williams stars as Margot, whose marriage to cookbook author Lou (Seth Rogen) seems stuck in neutral. They communicate in jokes, baby talk, and a weird game of threatening to kill the other in some newly grotesque way. Then she meets Daniel (Luke Kirby), a good-looking neighbor who understand her in ways beyond Lou's imagination. The sexual tension electrifies their scenes together, yet they're determined to not take their friendship into the obvious direction.

Williams may be the best American actress of her generation. She takes on challenging and difficult roles, bringing compassion and honesty to every one, and I've yet to see her hit a wrong note. I just hope that, after Brokeback Mountain, Blue Valentine (which I haven't seen), and Take This Waltz, she doesn't get typecast as an unhappy wife.

Anyone who's seen Rogen's comic work shouldn't be surprised that he's good in serious drama. His Lou is sweet, kind, and whimsical (there are reasons Polley cast a comedian), but utterly clueless. When Margot tries to have a serious talk with him, he has no idea how to handle it.

Polley cast another high-profile comic–Sarah Silverman–as Lou's recovering alcoholic sister. But this time with lesser results. Silverman has her moments, but as often as not, she's simply playing Sarah Silverman.

Sarah Polley first impressed me as a child actor in The Adventures of Baron Munchausen. Her work as a full auteur is even more impressive (her one previous work as a writer/director was the excellent Away From Her). In Waltz, she kept making seemingly wrong moves–false endings, odd places to insert nudity–only to prove as the story advanced that she knew exactly what she was doing.

I can't wait to see what she does next.

We saw Take This Waltz at the Shattuck, in the same auditorium where we had the bad Cave of Forgotten Ancestors experience. I'm happy to report that the aspect ratio problem appears to be fixed. And the colors looked fine, as well.