From Britain with Love continues at the Rafael. The Sausalito Film Festival opens today for a three-day run. And since Buddhists and us Jews get our own festivals, it’s only right that the Roxie devote one day (Sunday) to the Atheist Film Festival. 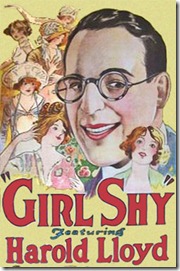 A- Special Harold Lloyd evening with presentation & Girl Shy, Niles Essanay Silent Film Museum, Saturday, 7:30. In Girl Shy, Harold Lloyd plays a small-town hick so terrified of young women that he can’t talk in their presence. Nevertheless, he manages to write a book on how to be a great lover. Not quite up there with The Freshman and Kid Brother, but still very funny. It’s also his first film with his best leading lady, Jobyna Ralston. Also on the bill is Lloyd’s last—and in my opinion best—short, “Never Weaken.” John Bengtson, author of the new book Silent Visions: Discovering Early Hollywood and New York Through the Films of Harold Lloyd,  will present a program exploring the locations of both films. (He has also written similar books on Keaton and Chaplin’s locations.)

Rifftrax Presents Night of the Shorts II: Electric Riffaloo, Castro, Saturday, 8:30. Last week, you had the opportunity to see a RiffTrax performance broadcast into hundreds of theaters. This week, you can watch this troupe of Mystery Science Theater veterans perform live. You can also read about my one live RiffTrax experience. An SF Sketchfest presentation.

A Terrence Malick Double Feature: Days of Heaven & Badlands, Castro, Thursday. The story seems a better fit for a 64-minute

B noir from the 1940s, but Days of Heaven isn’t about story, and only moderately about character. It’s about time, place, and atmosphere. The time is around 1916, and for most of the film, the place is a large wheat farm on the Texas panhandle–empty fields stretching out to the horizon, broken up by gentle hills and a stream that give it a unique beauty. this is a very good film turned great by cinematographer Nestor Almendros. Through the yellow of the wheat fields, the haze of the sun, and the smoke of early 20th-century technology, Almendros creates a sense of something that is not quite nostalgia, and not quite a dream, but a reality seen through the haze of distant memory. See my longer commentary. I wouldn’t put Badlands in the same category, but it also provides some haunting atmosphere as it follows two young lovers (Martin Sheen and Sissy Spacek) on a frighteningly casual killing spree.

B Tommy, SFMOMA, Thursday, 7:00. Ken Russell’s over-the-top film version of Pete Townsend’s and The Who’s rock opera hits you over the head with all the subtlety of Beach Blanket Babylon, turning a parable of spiritual quest into a carnival satire of materialism and cults. Oliver Reed proves he can’t sing as he plays a male version of the stereotypical evil stepmother. He’s not the only embarrassment in the all-star cast. But his co-stars, Roger Daltrey and Ann-Margaret, sing, dance, and give great performances, as do Eric Clapton, Tina Turner, and Elton John in smaller roles. Townsend’s music is still brilliant, and if this isn’t the best version of Tommy, it’s certainly the most fun.

A Double Indemnity, Castro, Wednesday. Rich but unhappy (and evil) housewife Barbara Stanwyck leads insurance salesman Fred MacMurray by the nose from adultery to murder in Billy Wilder’s near-perfect thriller. Not that she has any trouble leading him (this is not the wholesome MacMurray we remember from My Three Sons).  Edward G. Robinson is in fine form as the co-worker and close friend that MacMurray must deceive. A good, gritty thriller about sex (or the code-era equivalent) and betrayal, Double Indemnity can reasonably be called the first true film noir. On a double bill with The Postman Always Rings Twice, which I haven’t seen in a very long time but remember fondly.

A- Women On the Verge of a Nervous Breakdown, Castro, Friday. Men are  jerks and women are crazy. At least that’s the view of Pedro Almodovar’s comedy of infidelity. 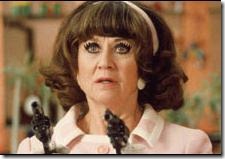 The picture starts like a reasonably serious comedy, sprinkling a few laughs in with the character development. Yet it suggests that something broader is just around the corner. The décor is just a little over the top, and some of the jokes (consider the detergent commercial) are in the stratosphere. Those outrageous bits are a harbinger of things to come. By the half-way point, the movie is as wacky as classic American screwball comedy–and considerably bawdier. Carmen Maura stars as the woman wronged (well, the main woman wronged), with an impossibly young Antonio Banderas playing the son of the man who wronged her. On a double bill with The Flower of My Secret  as part of the series Viva Pedro.

B Wait Until Dark, Stanford, Saturday through Thursday.  Audrey Hepburn stars as a blind housewife stalked by drug dealers who are themselves stalked by a vicious killer (a rare, very scary Alan Arkin). This effective thriller has one very original, very effective shock moment (I can’t give it away) that has since been ruined by overuse. But this, I believe, was the first time it was done. On an Audrey Hepburn double-bill with Breakfast at Tiffany’s, a movie I saw long ago and didn’t care for at that time.

B- 2001: A Space Odyssey, Castro, Sunday. I used to worship Stanley Kubrick’s visualization of Arthur C. Clarke’s imagination, but it hasn’t aged all that well. We’ve all 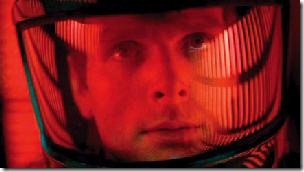 seen the actual year, and know that Clarke and Kubrick got almost everything wrong. Yet there’s no denying the pull of 2001’s unorthodox storytelling and visual splendor–if you can see it properly presented. 2001 was shot for 70mm projection on a giant, curved, Cinerama screen–an experience that’s simply not available in the Bay Area today. The Castro can and has presented it in 70mm (although on a flat screen). Unfortunately, this presentation is merely 35mm. On a double bill with the forgettable sequel, 2010: The Year We Make Contact.

A Hitchcock Double Bill: Shadow of a Doubt & Dial M for Murder, Stanford, Friday. In Shadow of a Doubt (Hitchcock’s first great American film and the movie that earns this double bill an A, a serial killer (Joseph Cotton) returns to his small-town roots. When his favorite niece (Teresa Wright) begins to suspect that all is not right with her beloved Uncle Charlie, her own life is in danger. The locations were shot in Santa Rosa. Dial M–the only 3D film made by an important auteur until Avatar–isn’t great Hitchcock, but it’s passable. Unfortunately, the Castro will not present the movie in 3D.