You can think of Mark Harris’ fascinating book, Pictures at a Revolution: Five Movies

and the Birth of the New Hollywood, as a prequel to Peter Biskind’s far-better known Easy Riders, Raging Bulls: How the Sex-Drugs-and-Rock ‘N’ Roll Generation Saved Hollywood. But Harris has a tighter focus. He reveals Hollywood in the mid-1960s by concentrating on the five movies nominated for Best Picture of 1967.

And what a five they were. Two of them, The Graduate and Bonnie and Clyde, were revolutionary in their technique, in their use of censorable material, and in the youth audience that made them surprise hits (The Graduate, which was turned down by every major studio before it found 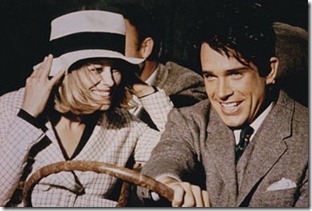 independent financing, was for a time the third highest-grossing film in history). Another two, In the Heat of the Night and Guess Who’s Coming to Dinner, were more conventionally made, but dealt with race issues generally avoided in commercial genre pictures. Then there was Dr. Dolittle, a big, expensive, old-fashioned musical that cost more than twice the other four films combined, yet bombed with both critics and audiences.

I never heard of this book, published in 2008, until I stumbled upon it at the overstock table in Pegasus Books. I’m so glad I did.

Harris tells the five stories chronologically, cutting back and forth between them (funny how I casually used a film term, cutting, to describe a literary technique). He starts in

1963 (most of these films took a long time to gestate) with two Esquire employees, David Newman and Robert Benton, starting to work on a screenplay about a couple of bank robbers from the 1930s. Then he starts following the career choices of a new pretty-boy movie star, Warren Beatty, and how he considered taking on the starring role in The Graduate. Then on to executives at 20th Century Fox, considering a big musical based on the Dr. Dolittle books.

Harris paints a picture of a Hollywood torn between two conflicting generations, but 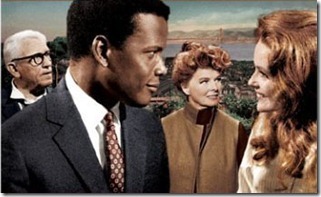 nevertheless surprisingly insular and interconnected. Not only was Beatty, the star and producer of Bonnie and Clyde, considered for the The Graduate, but Poitier, the star of two of the films, almost had a supporting role in Dolittle. Years before he directed The Graduate, Mike Nichols enjoyed his first success as a performer in a stage show directed by future Bonnie and Clyde director Arthur Penn. And so on, and so forth.

All of these pictures’ backstage stories make good reading, but the Dr. Dolittle sections have the fascination of a slow-motion train wreck. Movies that

depend on animals almost always go over budget. This one had hundreds of animals, a temperamental star (Rex Harrison—the closest thing to in a villain in the book), and producers who neglected to consult a meteorologist before picking a date to shoot location work in England. What’s more, like a lot of other big-budget musicals made in the wake of The Sound of Music, it mistook production value for quality, and came out just as audiences were tiring of big movies.

On one level, the 1967 Best Picture nominees were not that different from what get nominated today. You had two independently-minded films that really pushed the envelope, two low-budget, conventional films with their heart in the right place (including the winner, In the Heat of the Night), and a big production intended to be a blockbuster. The difference is that the big “blockbuster” flopped, while the four inexpensive and daring (or sort of daring; Guess Who’s Coming to Dinner was really very timid) pictures were all huge box office successes.

One thought on “Pictures at a Revolution: Five Movies and the Birth of the New Hollywood”