When you first insert this disc, it takes a few seconds to load (as all Blu-rays do), then it goes directly to the opening menu–no ads, no trailers. I wish all major studio Blu-rays were like that.

Now, on with my review:

I enjoy a strange relationship with the biggest commercial hit of the 1950s.

With its simplistic characters, corny dialog, and overriding atmosphere of pomposity, The Ten Commandments is the ultimate unintentional comedy. Plan Nine from Outer Space holds nothing on it for hilarious incompetence.

And yet, it’s also a rich, generous, and entertaining spectacle, and a visually lovely motion picture. It has one truly impressive, low-key performance (Cedric Hardwicke as Sethi). At times, it even succeeds in its simplistic spirituality.

How pompous is it? At

the end of the opening credits, where one card should simply say “Produced and Directed by Cecil B. DeMille,” it takes three cards to say “Those who see this motion picture – Produced and Directed by CECIL B. DE MILLE – will make a pilgrimage over the very ground that Moses trod more than 3,000 years ago…in accordance with the ancient texts of Philo, Josephus, Eusebius, the Midrash and…The Holy Scriptures.”

But if the movie offered nothing but pomposity and unintentional laughs, it wouldn’t hold up for its 220-minute runtime. DeMille was above all a showman, and he knew how to entertain. And in this, his last film, he entertains in abundance. He filled this long epic with gorgeous sets, gorgeous set pieces, spectacular photography, thousands of extras, and a melodramatic storyline so infectious that it drags you in even when you’re laughing at its absurdity.

I’m a religious Jew. I take the story of the Exodus very seriously. (I also know enough to wonder what particular midrash they’re talking about.) For the most part, I find DeMille’s interpretation to be a bit ridiculous (Prince of Egypt, with its more human Moses, comes much closer to my own interpretation). But there are times, especially in the second half, when the power of the story becomes strong enough to overcome the silliness. The scene of the Hebrews leaving Egypt works on a level far beyond the rest of the movie.

But then, DeMille was always better directing crowds than actors.

How Does It Look?

Blu-ray seems made to show off the large-format movies of the 1950s and ’60s. And of those large formats, none fit today’s widescreen HDTVs as well as Paramount’s VistaVision. (Why? It’s aspect ratio wasn’t as wide as other formats, so it doesn’t have to be letterboxed. It can fill the whole screen.) Since The Ten Commandments was the most spectacular film shot in VistaVision, I had every reason to expect this to be one of the best-looking discs ever released.

I was not disappointed. The clarity, sharpness, and depth of the image are simply 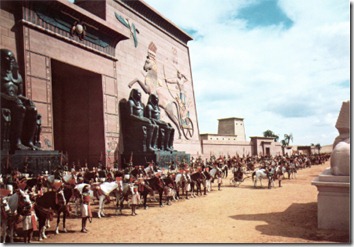 remarkable. So is the color saturation. The movie was designed to pop out at you with bright colors, spectacular vistas, and fine detail. This Blu-ray captures all that with a mouth-watering transfer. You can mute the sound and simply enjoy the color design, the paintings and sculptures on the sets, the interactions between extras in the distance, and the safety pin on the baby Moses. (The stills provided by Paramount don’t do the transfer justice.)

The detail sometimes works against the suspension of disbelief, and not just with the safety pin. Matte lines are often embarrassingly obvious, as are scenes that cut back and forth between locations in Egypt and sound stages at Paramount. But then, the dialog also works against the suspension of disbelief, and that just adds to the fun. (These technical flaws were visible in the original prints.)

Paramount spread this very long movie over two discs–to my knowledge a first for Blu-ray. Even Kenneth Branagh’s Hamlet, which is longer than The Ten Commandments by 22 minutes, is on one disc. That extra disc here means less compression and probably helped create such an excellent picture.

How Does It Sound?

Unlike other large formats of its time, VistaVision didn’t come with magnetic stereo sound. Its movies were originally released in mono. As far as I can tell, that was even the case with The Ten Commandments’  initial roadshow engagements.

This Blu-ray doesn’t include the original mono soundtrack. To my knowledge, no home video version of The Ten Commandments ever has.

On the other hand, the disc has a lossless DTS-HD Master Audio 5.1 soundtrack that nicely emphasizes the movie’s pomposity. In fact, if I had the choice between the original mono and the 5.1 mix, this would be one of the few films where I’d go with the 5.1. Aside from my purist attitudes, I really can’t complain. There’s also a Dolby Digital surround 2.0 track, which would be the better choice if you don’t have full home-theater sound.

I chose to review the low-end two disc release with limited extras. The main one is a commentary track by Katherine Orrison, author of Written in Stone: Making Cecil B. DeMille’s Epic The Ten Commandments. It’s a very good, informative, and entertaining commentary, filled with trivia, technical explanations, and Biblical interpretations. Orrison has a considerably higher opinion of DeMille and his work than I, and a very different religious view of the film and its source material. I don’t agree with all of her opinions, but I enjoyed listening to them.

But even she couldn’t resist pointing out flaws. “That’s not a burning bush,” she complains about one of the movie’s least effective special effects. “That’s wavy light with sticks.”

The only other extras are newsreel footage of the film’s premiere, and three trailers (the first one is ten minutes long). These are on the second disc, along with part 2 of the film.

Paramount is also selling a six-disc Blu-Ray/DVD Gift Set. This includes the two discs I’ve just reviewed, plus a third Blu-ray with DeMille’s 1923 silent  version and other extras. Then it repeats much of the same material on three DVDs.

I wish they were selling a three-disc Blu-ray-only set, as well.

The Ten Commandments Blu-ray goes on sale on March 29. That’s about two weeks before Passover. Plenty of time to invite friends, make some matzo pizza, and have a great time.