Kino has another Buster Keaton Blu-ray title on the way, and it’s a winner.

Three years before he made The General, Keaton mined the antebellum South for comic gold in this almost gentle comedy inspired by the Hatfield/McCoy feud. Still adjusting to the long form of the feature film (this was only his second), Keaton started the movie slowly, with a played-straight melodramatic prologue and a wistfully funny extended sequence involving a journey from New York to the heart of

When Buster finally arrives at his destination and the plot goes into motion, he finds himself a guest in the home of men sworn to kill him. Luckily, the code of southern hospitality forbids them from murdering a guest…as long as he’s in their home. He finds himself desperate to escape a home he doesn’t dare leave.

Keaton had been a great comedian, and a great acrobat, from childhood. When he discovered the movie camera, he became a superb fantasist, as well. But with Our Hospitality, he mastered story-telling and photography, excelling in those arts as well. This is the first Keaton film that’s a pleasure, visually, to watch.

Like two thirds of his previous feature, Three Ages, Our Hospitality is a period piece. But it’s a very different type of period piece. The caveman and Roman sequences in its predecessor made no attempts at historical realism, but this time, Keaton is telling a real story set in a real time. He isn’t entirely above making jokes comparing the old days to his own (as he would be with The General)–the first gag in the movie revolves around an extremely rural New York City. But by and large he’s created here what was probably the first historically accurate period comedy in cinematic history.

Keaton would return to a rural southern setting two more times, for The General and Steamboat Bill, Jr. It obviously worked for him, and nearly a century later, the movies still work–extremely well–for us.

The comedy in Our Hospitality has survived unblemished for nearly 90 years. The film elements aren’t quite so pristine. The print source used for this high-def transfer contains a considerable amount of scratches, especially obvious in the intertitles.

Aside from the scratches, the print often looks a bit washed out and soft. Not horrible, and still considerably better-looking than a DVD, but it lacks the incredible clarity of Kino’s Blu-ray of The General. One of the disc’s supplements (discussed below) cuts back and forth between scenes from both films, and it’s startling how much better The General is at taking advantage of Blu-ray’s visual capabilities.

But the image quality is still good enough to recommend the $35 Blu-ray over the new $30 DVD.

Kino has included two separate musical scores. The best, by far, was composed by Carl Davis and recorded with a full orchestra in 1984. The music is lush and sentimental, and compliments the movie’s nostalgic and visually beautiful tone. It also compliments the comedy, while only once making the mistake of cueing us when to laugh.

This score, made for British television, was broadcast with the film on PBS in the late 80s or early 90s (I’ve got a homemade VHS recording of it somewhere). But to my knowledge, it has never been released in a home video format in this country.

Kino gives us two mixes of this score: the original two-track stereo (uncompressed PCM) and a new, 5.1 mix (DTS-HD Master Audio, which has lossless compression). The 5.1 mix sounds as if someone digitally moved a few instruments from the left and right tracks to the center one, then added reverb to the surrounds. The original two-track mix is cleaner and more enjoyable.

If you have the original DVD release, you’re familiar with Donald Hunsberger’s score. It’s serviceable, but nothing like the Davis score. Kino presents it in two-track, lossy Dolby Digital. 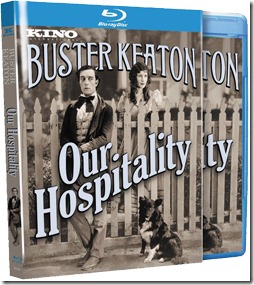 The best supplement on the disc is a half-hour documentary on the feature, “Making Comedy Beautiful.” The doc discusses how Our Hospitality was made and its importance in the development of Keaton’s style. This is the extra, mentioned a few paragraphs above, that contrasts scenes from this film and The General.

The most curious extra is “Hospitality,” a 49-minute alternate version of the movie discovered in 2008. This cut, which contains no new scenes, emphasizes story and skips much of the comedy. No one alive knows why it was made. I tried to watch it, but after a few minutes, the severe nitrate decomposition of the film element gave me a headache. But the five-minute introduction to this mysterious, historical anomaly is well worth watching.

The disc also includes the two-reel Al St. John comedy “The Iron Mule,” which uses the old-time train created for Our Hospitality, and two photo galleries.

Our Hospitality deserves higher recognition among Keaton’s films than it usually gets. Let’s hope this disc, which goes on sale on March 22, helps bring it.

One thought on “More Keaton on Blu-ray: Our Hospitality”