I recently completed a Blu-ray boxed set gift guide for PC World. I looked at a lot of discs for that one. Not all of them contained movies.

With few exceptions, I’ve pretty much ignored series television for a very long time. In recent years I’ve heard and read raves about The Sopranos, Weeds, and other programs, but I just avoided the subject. I didn’t (and still don’t) subscribe to HBO or Showtime, so they were out of my realm.

Researching that article forced me to reconsider. I felt I needed to cover TV as well as movies, and that meant looking into shows I’d only heard of.

In the end, I didn’t include an adult-targeted television series in the article, but here are two I regretted leaving out:

The moment I opened the Nurse Jackie Season One box, I knew I couldn’t use 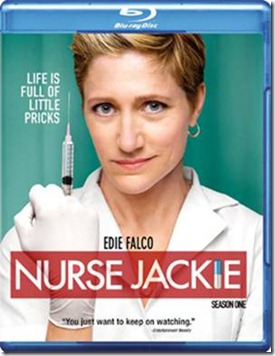 it in the article. Two discs inside a conventional Blu-ray case doesn’t make a boxed set.

Which is too bad because the show is utterly hypnotic. Last night I sat down to watch one 30-minute episode (number 3; I’d already watched the first two). I ended up watching four. And none of them had cliff-hanger endings. I just wanted to learn more about these people and their environment.

Edie Falco stars as Jackie Peyton, a New York City emergency room nurse. She’s a wonderful nurse–knowledgeable, intelligent, and empathetic. But she’s falling apart. She’s hiding her back problems from co-workers, and has become addicted to the painkillers she needs to get through the day. She’s having an affair with the pharmacist who supplies her with the painkillers. They seem to really like each other, but you can’t help wondering if this is a sex-for-drugs exchange.

I can’t tell you any more about her, or the show, without giving too much away. The program runs on Showtime.

I came very close to recommending Mad Men Season Three in the article. With three discs in a standard case, it just barely qualifies as a boxed set. The problem was that I couldn’t justify recommending Season Three. If you’re new to a show, you should start at the beginning. If you already know it, you don’t need my recommendation.

In fact, as a viewer, I gave up on season three early and started, via Netflix, with season one.

Mad Men looks at ad men–specifically advertising executives working in New York at the beginning of the 1960s. And one thing this show is not is nostalgic. Shot mostly in muted colors, it gives us a world where men are all misogynists, women must be sex objects but not sluts, and casual racism and anti-Semitism crop up in people’s conversations. I suspect that a lot of these attitudes will change in future episodes. Season three Blu-ray extras include two documentaries on the civil rights movement.

In the three episodes I’ve seen so far, central character Don Draper (Jon Hamm) seems to be hiding something. I’m not sure what. He looks

perpetually worried as he studies ads in magazines and tries to come up with something better. He’s conducting one extramarital affair and may soon start another. His wife is a nervous wreck. A surprise run-in with an old army buddy terrified him. Like everyone on the show, he drinks and smokes constantly.

Mad Men runs on AMC, which used to be American Movie Classics.

Okay, so much for television. I’ll get back to movies in future posts–both theatrically and on Blu-ray. I promise.

One thought on “Movies, TV Shows, and Blu-ray Boxed Sets”