Disclaimer: This may not be up-to-date. I’m actually writing this Monday, July 19, before going off on a vacation. Should anything change, I won’t be able to update it.

A Stop Making Sense, Red Vic, Thursday (and continuing through the next Saturday). Jonathan Demme and the Talking Heads realized that a concert 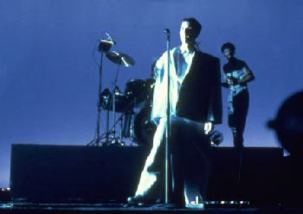 film doesn’t have to be a documentary. They barely show us the audience and never the backstage; just the performance (actually compiled from three performances). But what an amazing piece of rock and roll performance art they provide! Strange dance moves, great riffs, puzzling and possibly profound lyrics, and a very big suit, all backed by a beat that makes you want to get up and dance. 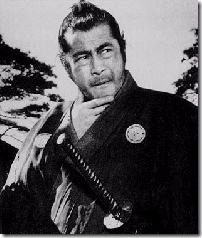 best for story-telling purposes) wanders into a small town torn apart by two gangs fighting a brutal turf war. Disgusted by everyone, our hero (who else but Toshiro Mifune) uses his wits and amazing swordsmanship to play the sides against each other. In the hands of Akira Kurosawa, the result is an entertaining action flick, a parody of westerns, and a nihilistic black comedy all rolled into one. Allegedly inspired by Dashiell Hammett’s novel Red Harvest, it was remade twice as Fistful of Dollars and Last Man Standing. Read my Kurosawa Diary entry. Part of the PFA’s summer-long Akira Kurosawa Centennial.

A+ Rear Window, Stanford, Saturday through Tuesday. Alfred Hitchcock at his absolute best. James Stewart is riveting as a news photographer temporarily 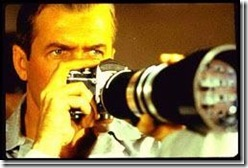 confined to his apartment and a wheelchair, amusing himself by watching his neighbors (none of whom he knows) and guessing at the details of their lives. Then he begins to suspect that one of them committed murder. As he and his girlfriend (Grace Kelly) begin to investigate, it slowly begins to dawn on us that they’re getting into some pretty dangerous territory (something they don’t realize until it’s almost too late). Hitchcock uses this story to examine voyeurism, urban alienation, and the institution of marriage, and to treat his audience to a great entertainment. On a double-bill with Harvey, which includes another great—but very different—Steward performance.

Metropolis Redux, VIZ Cinema, Saturday & Monday, 7:00. Now that you’ve had a chance to see Metropolis as it was originally meant to be seen, here’s your chance to see the wrong version (although I admit I haven’t seen it). This 1984 reissue has bright tints, subtitles instead of intertitles, and a rock soundtrack to mask the sound of Fritz Lang spinning in his grave.

One Wonderful Sunday, Pacific Film Archive, Wednesday, 7:00. One terrible movie. A young couple who have been dating for years (and still haven’t gotten to first base) try to have a fun day on the town despite a lack of cash or, quite frankly, chemistry. Think Before Sunrise without good dialog, interesting characters, or real sexual tension. Another, less fortunate part of the PFA’s summer-long Akira Kurosawa Centennial.

Arab Labor: Season 2, Castro, Wednesday, 6:30. I haven’t seen the new season, but I loved the first season of this controversial but hilarious Israeli sitcom, and I’m looking forward to the three new episodes the festival will be screening. Also on the program: satirist and Arab Labor screenwriter Sayed Kashua will receive this year’s Freedom of Expression Award.

B+ Scarface (1932 version), Castro, Sunday, 10:00. The best of the three films that started the 1930’s gangster genre, Scarface tracks the rise and demise of Tony Camonte, a violent thug who becomes a big shot by virtue of his total lack of virtue (Paul Muni 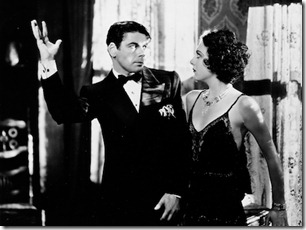 acting a little over the top for my taste). When he first sees a tommy gun, he joyfully cries out “Hey, a machine gun you can carry!” (And that’s when he’s being shot at with it.) Soon he’s using one to mow down his enemies and innocent bystanders alike. But he does love his kid sister. In fact, maybe he loves her too much. Written by Ben Hecht and directed by Howard Hawks, and you can’t find a better team than that. Good as it is, I wonder if it really belongs in a Jewish film festival; even one with a retrospective of Jewish gangster films. After all, the gangster here is Italian-American; only the actor is Jewish. The festival argues that Muni was famous in the Yiddish theater before he went Hollywood, and that gave the movie a Jewish subtext in 1932. I don’t buy it.

B Saviors in the Night, Castro, Saturday, 7:00. Director Ludi Boeken and his three screenwriters have made a respectable, well-made drama, based on true events, 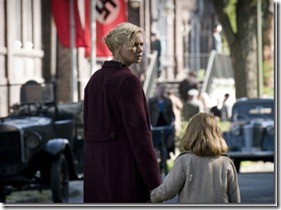 about German Jews hiding from the SS, sometimes in plain sight. The movie is dramatic, suspenseful, and gives a real sense of how war and Nazi propaganda effected a tight-knit, rural, German farm community where everybody looks after everybody else. The story of people living in constant danger holds you in suspense. You very much want to see these people come out of the war okay. Especially interesting are the teenage characters, flirting and fighting, and enthusiastically embracing fascism and anti-Semitism before eagerly going off to war as if it was a grand adventure. The opening night show. 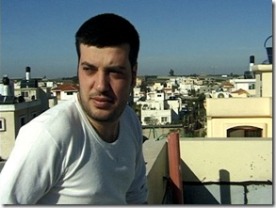 leading satirist, and the creator of the 2008 Jewish Film Festival sitcom hit, Arab Labor. He’s also the winner of this year’s Freedom of Expression Award. All that  suggests a very interesting and entertaining person. But Dorit Zimbalist’s brief (only 52 minutes) and dry documentary portrait presents us with an unpleasant bore. Clearly intended for people already familiar with Kashua’s work, it shows little of his genius. Nor does it dig deep enough to work simply as a profile of a profoundly unhappy man. On the other hand, it does reveal how closely the fictitious family at the center of Arab Labor resembles Kashua’s real world.

C- King of the Roaring 20′s – The Story of Arnold Rothstein, Castro, Monday, July 26, 12:00 noon. This 1961 gangster biopic is as bloodless as they come—and I’m not talking about the relative lack of violence. As played by a pre-Fugitive David Janssen, Rothstein comes off as too flat and dull to be either liked or hated. His only sins are ignoring his wife and being very good at a business that happens to be illegal (gambling). If the real Rothstein’s business involved any other illegal activities—violence, prostitution, or bootleg liquor—you’d never know it from this movie. Speaking of bootleg liquor, there’s almost no sense of period here; despite the “Roaring 20’s” in the title, it could just as well have been set in 1961. Despite it’s being part of the festival’s series Tough Guys: Images of Jewish Gangsters in Film, the movie seems reluctant to confront Rothstein’s ethnic and religious origins. His father (who only appears in two scenes), is a very religious man, but he never actually states what that religion is, even when he asks a potential daughter-in-law if she is of the same religion. Disclaimer: The DVD that the festival sent me for screening this film had a horrible, almost unwatchable transfer. I don’t think this effected my judgment, but it’s possible.