Last night I attended the San Francisco Silent Film Festival opening. The movie: John Ford’s first big-budget western, The Iron Horse. I had seen it once before on television. It was much better on the Castro’s very big screen.

Ford biographer Joseph McBride introduced the film, comparing it to Jaws in the effect it had on the director’s career. Like Jaws, The Iron Horse was directed by a young man who had never been given that big a budget or responsibility before. And like the big fish picture, it went out of control and way over budget, to the point where it could easily have destroyed Ford’s career. And, like Jaws, it was a huge hit at the box office, shooting its auteur into a life as a top, easily bankable Hollywood director.

Not that The Iron Horse is anywhere near as good as Jaws. The story is trite melodrama,the characters simplistic pawns and stereotypes, and patriotism 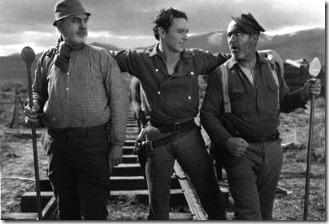 overblown, with an almost God-like view of Abraham Lincoln. But the spectacular visuals and exciting action sequences, especially the final Indian attack (yes, it’s also racist, but that’s hardly unusual for an American film of the 1920s), have an impact beyond the story and characters. They bring the mythic West alive—just as one would expect in a John Ford western. Consider it, at least from a vantage point of 86 years later, as a promise of better things to come.

Dennis James gave his usual exemplary performance on the Castro’s pipe organ. One advantage of sitting in the second row (yes, I’m crazy) was that I could see his sheet music. He was playing the original score provided to theaters when the film was in first run (I confirmed that with him after the show). Heavy on familiar tunes (Battle Hymn of the Republic was featured frequently), it added considerably to the excitement.

I don’t know how regularly I’ll be able to report on the festival, as I’m not taking my laptop with me and I’m not very good at typing into my phone. But I’ll try to keep posting, and if I fail, I’ll sum it all up for you on Monday.