I’ve seen The General countless times, in classrooms, museums, theaters, festivals, and home. I’ve rented it on VHS, and have owned it on Laserdisc, DVD, and Blu-ray. Yet Friday night at Oakland’s Paramount Theater, I had what is probably my greatest General experience.

And it wasn’t even, officially speaking, a movie event. It was part of the Oakland East Bay Symphony 2009-2010 season. And the Oakland Symphony Orchestra didn’t even accompany the movie.

In case you’re not familiar with The General, here’s my boilerplate newsletter description: 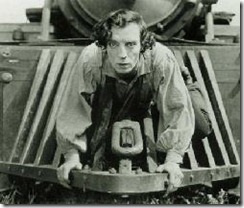 one. He meticulously recreated the Civil War setting. He mixed slapstick comedy with battlefield death. He hired thousands of extras and filmed what may be the single most expensive shot of the silent era (then used it as the setup for a punch line told in a simple close-up). The result was a critical and commercial flop in 1926, but today it’s rightly considered one of the greatest comedies ever made.

Organist Christoph Bull accompanied the movie on the Paramount’s Mighty Wurlitzer. I had never heard of the LA-based Bull before reading about this performance. After being introduced by the Symphony’s musical director, Michael Morgan, Bull discussed the attributes of the Wurlitzer, played some of the sound effects, and told us that although he had seen The General many times and researched Civil War-era music in preparation, he was going to improvise the score.

The music may have been improvised, but it was one of the best General scores I’ve 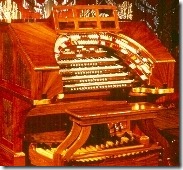 heard, coming close to the Carl Davis’ orchestra recording available on Blu-ray. Like Davis, Bull treated Buster Keaton’s comedy as an epic adventure (which, to a large extent, it is), never cuing us the audience when to laugh. Aside for some drums for the marching armies, he never used those sound effects he demonstrated before the feature. The result, of course, is that we laughed all the more. Bull, like Keaton, understands that if the joke is funny, the audience doesn’t need to be told.

And he played this great score over a pristine, high-quality 35mm print. To my eyes, at least, it never looked better.

So we had a perfect print of a great silent movie, with a fantastic score I’d never heard before. What else made this such a great General screening?

The audience. Although the Paramount was hardly packed, there were probably 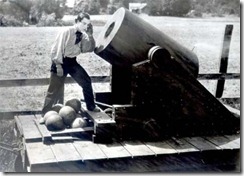 1,500-2,000 people in the house. These were, by and large, symphony goers, not silent movie fans who already know the movie by heart. The laughter, cheers, and applause were spontaneously, heartfelt, and full of surprise. I think the theater shook from laughter during the cannon sequence.

The General was only the first feature in a double bill. After the intermission, the orchestra finally took the stage for a performance of Camille Saint-Saëns’
Symphony No. 3, the Organ Symphony–with Bull, of course, on the organ. It’s an interesting piece, but as vaudevillians knew a hundred years ago, Buster Keaton is a tough act to follow.

There’s another performance tomorrow (Sunday), at 2:00. Don’t miss it.

2 thoughts on “The General at the Paramount”