Here are four films I recently saw for the first time. Curiously, the two new movies are both better than the two new-to-me movies. Proof that vintage cinema isn’t always great cinema.

This is the best and most original romantic comedy I’ve seen since Annie Hall. The characters are real and likeable (mostly), and the movie is very funny, with enough reality to bring you into the story. You probably already know that the couple involved is gay. But it’s not just a romcom with two men. They have relationship issues that straight men probably don’t, such as considering non-monogamy, and sculpting their bodies. A subplot involves the creation of a new LGBTQ history museum, which gives us a satirical view of how museums work.

Murder mysteries seem popular again, and so are funny murder mysteries. This one, set in London’s theater district via 1952, provides enough laughs for the ticket price. Scotland Yard has a murder on their hands; a man has been murdered backstage. The play being performed every night is Agatha Christie’s popular murder mystery, The Mouse Trap. So, you get layers of fake and real murders, along with actors playing actors playing actors. Sam Rockwell and Saoirse Ronan play the detectives on the job (he’s alcoholic, she’s competent). Other stars include Adrien Brody and David Oyelowo. Director Tom George does a good job of making it look like a Wes Anderson flick. 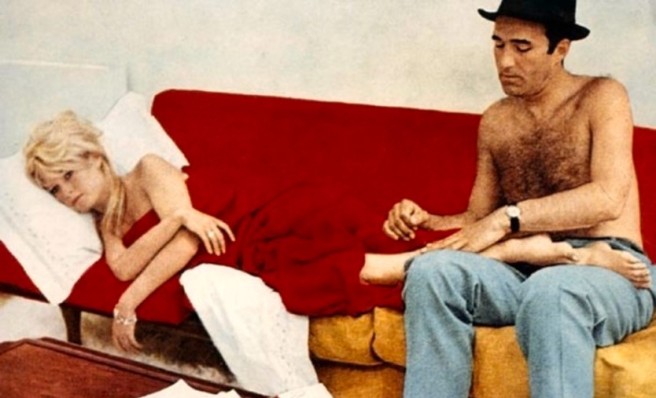 Jean-Luc Godard’s early movie about making movies isn’t very good. And it’s not even about making movies. The women worry mostly about their looks. The men spend most of their time treating the women badly. For most of the movie, a screenwriter (Michel Piccoli) fights with his wife (Brigitte Bardot). Jack Palance plays the producer who wants to film The Odyssey. This is the film where Fritz Lang, playing himself, says that CinemaScope is “only good for snakes and funerals.”

Some great films came out of the 1970s. This alleged comedy isn’t one of them. It’s supposed to depict a day at a Los Angeles car wash. The employees (mostly Black) clean cars by hand, but they also joke around, argue, make stupid mistakes, and try to get laid. I didn’t laugh once. There are a few serious scenes, but they don’t mesh with the rest. A lot of good talent, including Otis Day, Tracy Reed, Garrett Morris, The Pointer Sisters, George Carlin, and Richard Pryor, are sadly wasted.