Since we can’t escape from COVID-19’s reality, we can at least spend some time with the most escapist genre in the history of cinema: swashbucklers.

Although these sword-wielding adventure movies are usually set in Europe or the Caribbean from 1500 to 1800 CE, you can find them set in ancient Greece or 19th-century China. The heroes are always handsome, athletic, witty, and working outside the law. If they’re not pirates, they’re stealing from the rich and giving to the poor. They smile while facing disastrous odds, and sometimes break the laws of physics.

Here are some recommendations:

This 1938 Errol Flynn swashbuckler brings you into a world where virtue – graceful, witty, rebellious, good-looking, and wholeheartedly romantic virtue – triumphs completely over grim-faced tyranny. Flynn was no actor, but no one could match him for handling a sword, a beautiful woman, or a witty line, all while wearing tights. The great supporting cast includes Olivia de Havilland, Basil Rathbone, and Technicolor–a name that really meant something special in 1938. Read my A+ essay. 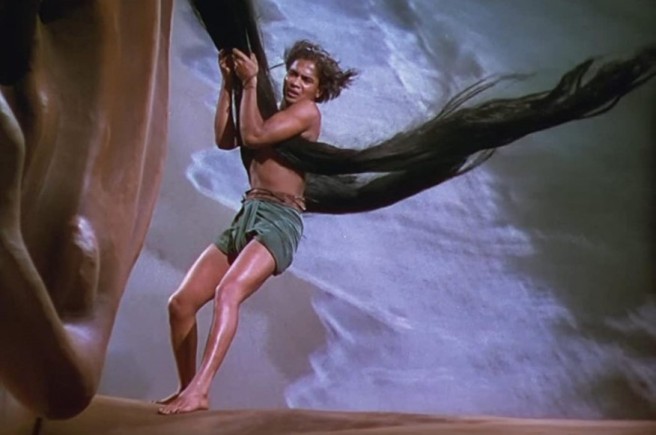 One of the great fantasy adventures, made decades before Star Wars clones and superhero movies glutted the market. The special effects lack today’s realism, but they still pack an emotional punch (my daughter, when she was young, found this giant spider scarier than the one in Harry Potter and Lord of the Rings). The sets are magnificent, the dialog enchanting, and the story’s randomness gives it a true Arabian Nights flavor. And all in glorious Technicolor. Read my A+ essay. 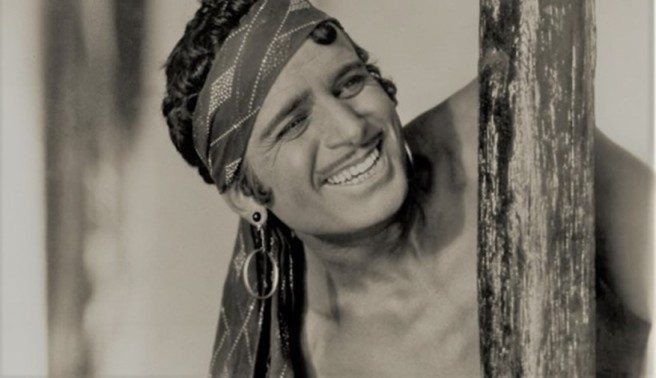 Same title as the “remake” above, but an entirely different story. Douglas Fairbanks’ massively spectacular Arabian Nights fantasy never actually fools you into thinking a horse can fly, but the clever effects and imaginative set design inspire awe and delight all the same. As does Fairbanks’ performance as the energetic and happily ambitious thief. Don’t expect actual Arabian flavor here; this is pure early Hollywood fancy. What’s more fun than state-of-the-art special effects? State-of-the-art special effects circa 1924. But don’t expect 21st century racial attitudes in Fairbanks’ treatment of the Chinese. 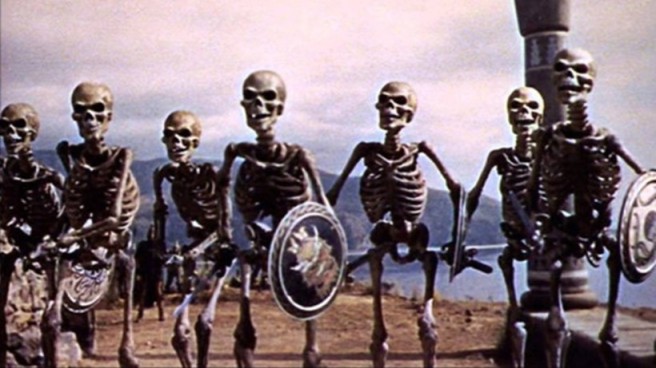 No other movie so successfully turns Greek mythology (or at least a family-friendly version) into swashbuckling adventure, while remaining true to the original spirit of the tales. As the gods bicker and gamble on the fates of mortals, Jason and his crew fight magical monsters and scheming human villains. Todd Armstrong and Nancy Kovack are unbearably stiff in the lead roles, but Nigel Green shines as cinema’s most articulate Hercules. But the real star, of course, is Ray Harryhausen’s hand-made special effects.

Outside of the work of Buster Keaton and Jackie Chan, few movie stars show off their athleticism like Burt Lancaster in The Flame and the Arrow. Along with his own exceptional acrobatic capabilities, Lancaster adds the equally athletic Nick Cravat as his silent sidekick (who does a fine imitation of Harpo Marx). Like all the best swashbucklers, this Robin Hood-like story, set in medieval Italy, is witty, exciting, only slightly suspenseful, completely ridiculous, and a lot of fun. Read my appreciation.

After Douglas Fairbanks and before Antonio Banderas, Tyrone Power wore the black mask to save early California from tyranny – and did it with panache. Power, who was bisexual in real life, plays Don Diego as an effeminate fop, and his masked alter ego as dashing masculinity. The movie is witty, fun, politically progressive (for its time), and includes one of the best sword fights ever to kill off Basil Rathbone. A remake of Douglas Fairbanks’ first swashbuckler, and better than the original. 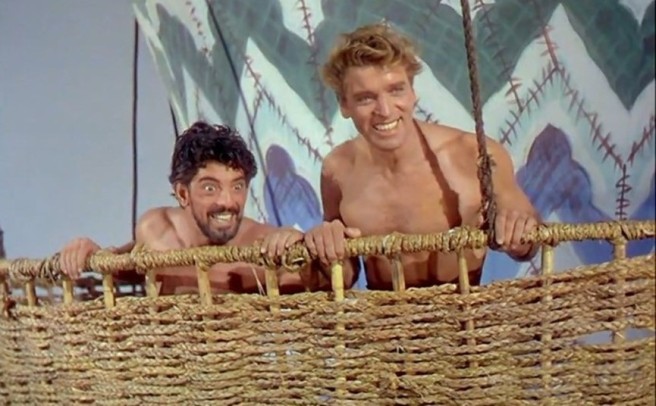 Burt Lancaster once again shows off his acrobatic talents in this tongue-and-cheek swashbuckler, again co-starring his sidekick, Nick Cravat. This time, Lancaster leads his buccaneers into a scheme to double-cross both the king’s men and the revolutionaries fighting for their freedom. But things get complicated. The stunts are spectacular, Lancaster and Cravat are clearly enjoying their antics, and almost everything is played for laughs. 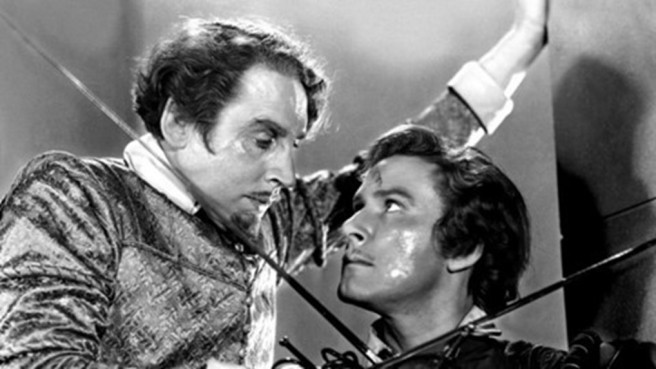 If only British history was really like this! Errol Flynn buckles his swash as a Francis Drake-like privateer who saves Elizabethan England from evil Spaniards bent on world domination (an obvious 1940 metaphor for the Nazis). The story bears no resemblance to the Rafael Sabatini novel on which it’s allegedly based, but that doesn’t mar the fun. Erich Wolfgang Korngold’s lush and romantic score provides ambiance.

I don’t believe I’ve ever seen a Hong Kong action flick that felt so much like a Hollywood swashbuckler. The evil rulers of a village are stealing everything they can while oppressing the people. Luckily for the average peasant, a masked criminal called Iron Monkey robs from the rich and gives to the poor. Meanwhile, a traveling physician and his young son, both martial arts masters, turn up to help. Funny, rousing, and thoroughly entertaining. 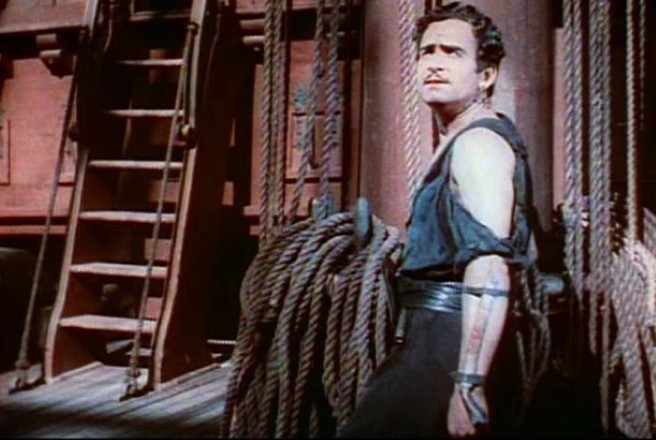 In his only pirate movie, Douglas Fairbanks plays a nobleman who joins a band of scurvy buccaneers to take them down in revenge for his father’s death. People mainly remember The Black Pirate for two things. First, a spectacular stunt where Fairbanks slides down a sail with a knife (it was ineptly recreated in the second Pirates of the Caribbean movie). Second, it’s only the third full-length feature shot entirely in Technicolor.

Yet another alleged adaptation of a Rafael Sabatini novel that’s actually an original story. Tyrone Power plays like the dark side of Errol Flynn–a swashbuckler with a hint of real menace and warped sexuality (at least as warped as Hollywood allowed in 1942). Here he’s a violent pirate who takes whatever and whomever he desires. True, he tries to clean up his act and enter politics when given the chance, but as W. S. Gilbert said about piracy, when “contrasted with respectability, it is comparatively honest.” A big, fun, Technicolor adventure.